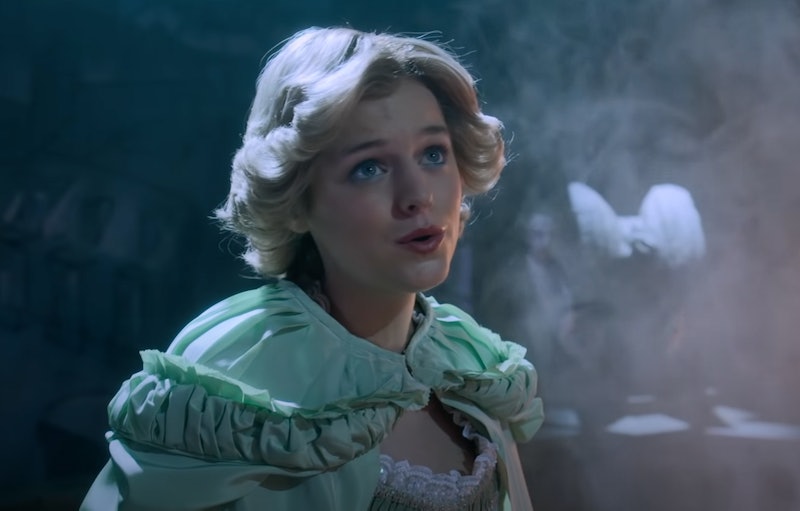 Prince Charles may not have been thrilled to receive a recording of “All I Ask of You” from Phantom of the Opera as a gift from Princess Diana during Season 4 of The Crown, but fans will likely be eager to watch a new outtake of Emma Corrin performing the song as Diana in the Emmy-winning Netflix series. The video, below, shows Diana standing in a period-piece costume and singing Andrew Lloyd Webster’s heartbreaking lyrics: “Love me, that’s all I ask of you.”

In Episode 9 of The Crown’s fourth season, Princess Diana gifts the performance to Prince Charles for their seventh wedding anniversary, which was in 1988. “I love to perform, it’s how I can best express myself,” Diana tells her husband during the episode. “And how I can show what I really feel.” The real Princess Diana did indeed gift her then-husband a performance of the track, a matter researched for The Crown by a team led by Annie Sulzberger, according to a Netflix. The researchers were unable to confirm if Diana danced or sang to the track, but the performance was largely believed to have been taped at the West End, where Corrin also filmed the clip using the musical’s original set.

The Crown used the performance to illustrate what a poor match Charles and Diana were, showing the former complaining to his sister Princess Anne about the “monstrous” recording later in the episode. “The chap playing the Phantom at least had a mask to hide behind,” Charles told Anne. “Honestly, there’s nothing more exhausting than putting on a kind face. I never realized how much scaffolding a smile required.”

Fans can now judge the performance for themselves. Additionally, during her audition for the role of Diana, Corrin was asked to give an impromptu performance of the song karaoke-style. The star also said that while filming the scene she had “a complete panic attack” and struggled to “sing like Diana and also worse than I can, which was very strange because she wasn’t trained,” according to ET Online.

In November 2020, Sulzberger confirmed that Diana loved Phantom of the Opera, saying the show did not make up the performance, during an interview with The Telegraph. “We did not make this up. There were a number of press reports on this, enough to make us feel comfortable including it in the show,” she told the publication. “It’s a story that pre-existed the writing of the script.”

More like this
Here’s Everything Coming To & Leaving Netflix In October
By Jake Viswanath
Caleb McLaughlin Details Racism From 'Stranger Things' Fans
By Radhika Menon
The ‘Emily In Paris’ Season 3 Release Date Is Here, Plus The First Footage
By Bustle Staff
Shaina Explains Why Natalie’s 'Love Is Blind' Text Claims About Shayne Have “No Validity”
By Grace Wehniainen
Get Even More From Bustle — Sign Up For The Newsletter