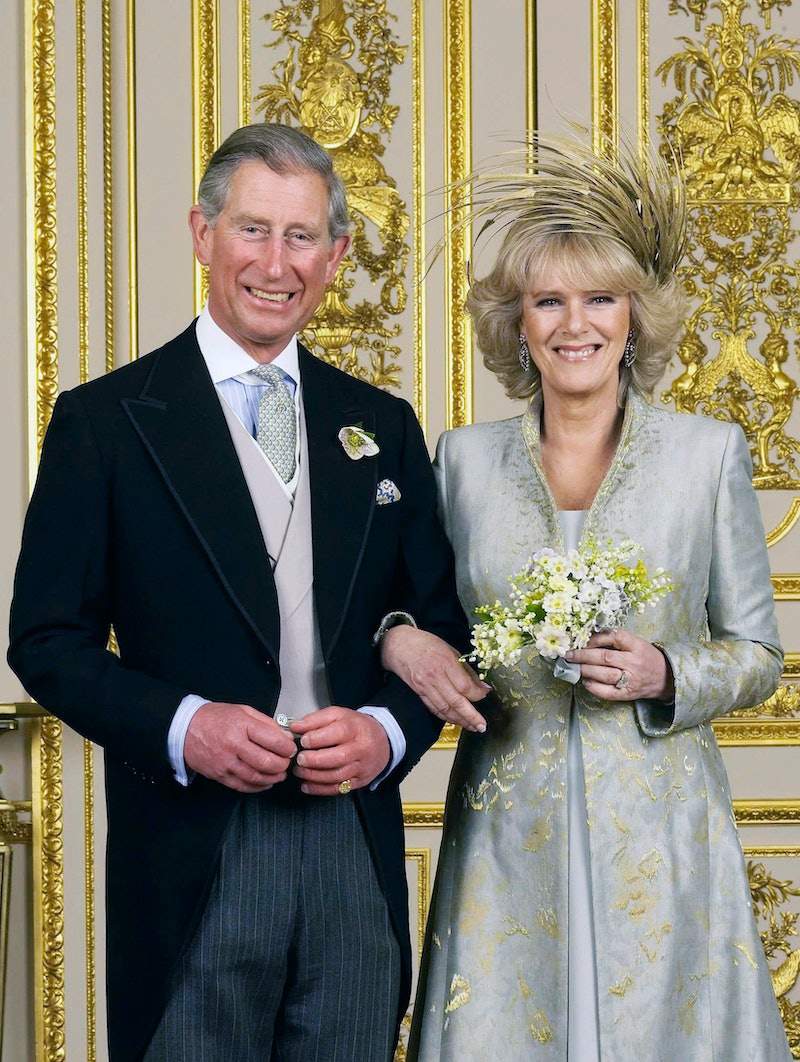 People believed for years that Camilla Shand was the unwanted interloper in Prince Charles' and the late Princess Diana's relationship. But The Crown Season 4 shows the reality. "People always assume Charles cheated on Diana with Camilla,” showrunner Peter Morgan told Entertainment Weekly. “It’s absolutely the wrong way round. He was deeply in love with Camilla and forced to marry Diana.”

Their romance has now lasted for 50 years, but their history is winding and complicated. If you find yourself confused about what happened when while watching The Crown, here's a full breakdown of how their relationship unfolded.

In The Crown's third season, Charles and Camilla lock eyes while playing polo at Windsor Park and immediately feel a spark. Unhappy with how her boyfriend Andrew Parker Bowles treats her, Camilla begins a relationship with Charles, who later describes her as "the one."

This is most likely accurate, though reports vary about how exactly they met. According to Time, a 22-year-old Charles met a 24-year-old Camilla at a polo match in Windsor Great Park in 1970, and the couple started dating some time after. But a 1992 People article claimed that they actually met at a 1972 party, where Camilla reportedly told Charles, "My great-grandmother was the mistress of your great-great-grandfather. I feel we have something in common.”

Regardless, the two's romance unfolded mostly through private meetings and phone calls — a necessary move, as Camilla wasn't aristocratic and thus not considered a great match for Charles. "He loved the fact that she smiled with her eyes as well as her mouth and laughed at the same silly things as he did," royal biographer Penny Junor wrote in The Duchess: The Untold Story. "In short, he was very taken with her, and after that first meeting he began ringing her up.”

The Crown's historical advisor Robert Lacey wrote in the The Crown: The Official Companion Volume 2 that 1972 was a big year for the couple. They often went to nightclubs and visited Camilla's family on weekends as well as Lord Mountbatten's Hampshire estate. But according to biographer Sarah Bradford, Lord Mountbatten grew concerned once he realized how serious Charles was about Camilla. So as shown in The Crown Season 3, he arranged for Charles to be assigned to the West Indies for eight months in an attempt to break them apart.

Charles joined the Royal Navy in 1971, and his relationship with Camilla seemed to die off when he had to report back to duty in 1973. "Although the smitten prince courted her for six months, he failed to propose before returning to sea in February 1973," People reported in 1992. “He dithered and hedged his bets until Camilla gave up on him,” Junor added.

As a result, Camilla married her former boyfriend Andrew Parker Bowles on July 4, 1973. Camilla and Charles remained friends, but Junor wrote that the news devastated Charles. “It seemed to him particularly cruel, he wrote in one letter, that after ‘such a blissful, peaceful and mutually happy relationship’, fate had decreed that it should last a mere six months."

Charles formally met Diana Spencer for the first time in November 1977, but it wasn't romantic. Diana was just 16, and Charles was dating her older sister, Lady Sarah, at the time. Charles and Diana began dating in July 1980 when Diana turned 18. They only met 13 times before Charles proposed, per Business Insider.

Camilla was never far from Charles' life though. As The Telegraph reported in 2005, "Curiously, and with an ominousness that was to become clear only years later, Andrew and Camilla Parker Bowles were present at most of Charles and Diana's courtship venues — Sandringham, Balmoral, Windsor, at the homes of friends."

Charles proposed to Diana on Feb. 6, 1981 and The Guardian suggested he even did it in Camilla's garden. When asked if he and Diana were in love during an interview announcing their engagement, Diana said yes while Charles cryptically added, "Whatever in love means."

According to ABC's 2017 special The Last 100 Days of Diana, Camilla was present at Charles and Diana's wedding, despite Diana not wanting her to attend. Diana and Charles went on to have two children, William and Harry.

Per ABC's documentary, Charles and Camilla resumed their affair sometime around 1986. Diana knew about it. In a 1995 BBC One interview, she famously said, "There were three of us in this marriage, so it was a bit crowded."

The public became aware of the affair in 1992 when tapes of conversations between Charles and Camilla were leaked. Andrew Morton’s shocking book Diana: Her True Story was released the same year, detailing Diana’s jealousy over Charles’ involvement with Camilla. In one interview, Diana said she tried to confront Camilla at a party in 1989. "I was terrified of her. I said, 'I know what's going on between you and Charles and I just want you to know that,'" Diana told Morton, per People. "She said to me: 'You've got everything you ever wanted. You've got all the men in the world fall in love with you and you've got two beautiful children, what more do you want?' So I said, 'I want my husband.'"

The 1992 People article speculated that if Charles divorced Diana, he would likely not be allowed to remarry. In December of that year, Prime Minister John Major announced Charles and Diana's official separation.

Camilla and Charles' relationship became even more public spectacle in January 1993 when a transcript of a sexually explicit 1989 phone conversation between the two was published by tabloids, leading to the scandal known as Camillagate. "I want to feel my way along you, all over you and up and down you and in and out," Charles was heard saying in the recording.

Charles admitted to adultery in a 1994 TV documentary. Per The New York Times, he called Camilla "a great friend of mine" and said she will "continue to be a friend for a very long time."

Per The New York Times, Camilla and her husband officially divorced in January 1995. That same year, Diana admitted to having her own affair with polo player James Hewitt in a BBC interview. In December, the Queen sent a letter to Diana and Charles saying that a speedy divorce was in the interest of all parties involved.

The Guardian reported that Charles introduced Camilla to his sons in 1998 and that they were working on a "transparent campaign" to introduce Camilla to the public. But Charles' parents still didn't approve of the relationship. As the Los Angeles Times reported, "Queen Elizabeth II and Prince Philip disapprove of their son's once-adulterous relationship with Parker Bowles and stayed away" from Charles' 50th birthday party.

Camilla and Charles went public for the first time in January 1999. The two were photographed together leaving a birthday party for Camilla's sister at the Ritz Hotel in London. They were spotted at more events after that, attending theater shows and social functions together.

The Queen attended King Constantine of Greece's birthday party where Camilla was also in attendance, which many took as a sign she finally approved of the relationship.

Charles and Camilla kissed for the first time in public at an event for The National Osteoporosis Society at Somerset House in London.

Charles had been living with Camilla at Clarence House since 2003, and in February 2005 he announced their engagement. They got married on April 9 of that year in a civil ceremony at Windsor Guildhall. Though the Queen and Prince Philip didn't attend, they were at the subsequent blessing at St. George's Chapel.

Because Diana held the title of Princess of Wales, Camilla received the title Her Royal Highness The Duchess of Cornwall. But in a 2010 interview, Charles suggested that Camilla could be called Queen if he becomes King. "Does the Duchess of Cornwall become Queen of England if and when you become the monarch?" NBC's Brian Williams asked, to which the Prince answered, "That's well…we'll see won't we? That could be."

As of 2020, Camilla and Charles are still married.

More like this
Don't Expect To See Your Fave Modern Royals Depicted On 'The Crown' Season 6
By Jack Irvin
An 'Emily In Paris' Fave Is Joining Season 5 Of 'The Crown'
By Bustle Editors
Who Is 'Stranger Things 4' Fan-Favorite Joseph Quinn Dating IRL?
By Grace Wehniainen
Sadie Sink Would Escape Vecna From 'Stranger Things' With This Taylor Swift Song
By Grace Wehniainen
Get Even More From Bustle — Sign Up For The Newsletter