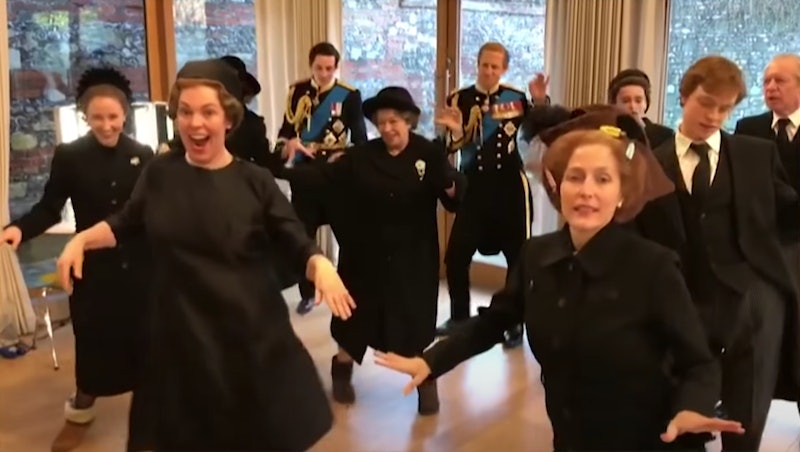 Did you ever expect to see Queen Elizabeth II and Margaret Thatcher breaking it down to a Lizzo track? Well, now you can — thanks to the actors who portray them on Netflix's The Crown. Actress Gillian Anderson appeared on Late Night With Seth Meyers on Jan. 25 to discuss all things related to Season 4 of The Crown. During her appearance, Meyers surprised her by showing a behind-the-scenes video that she never expected to be seen by the public: herself and the rest of The Crown cast doing a choreographed dance to Lizzo's "Good As Hell."

While discussing the talent and humor of Anderson's Oscar-winning Crown costar Olivia Colman, Meyers began to introduce the video, to which Anderson chuckled in embarrassment. "This was before pandemic when you guys were shooting together, but this was a funeral scene, and when the cameras were not rolling, the cell phones were," said Meyers. "And you guys were doing a choreographed dance to Lizzo."

Explaining how the video came about, Anderson said, "Olivia [Colman] apparently does a dance class in the area that she lives with a bunch of friends on a regular basis. And the last time she did the class, they had danced to that Lizzo song." She continued, "She asked if we would happen to be interested in maybe doing it, and she would video it, and then she would just share it only with her friends, the other dancers. So it was never meant to see the light of day, and yet here we are."

The clip in question features Anderson, an extremely enthusiastic Colman, and even more of the cast performing the fully-choreographed dance complete with a hair toss and nail check — just as the song's chorus lays out. It concludes with a grand slide step move that had the entire cast cracking up in laughter. After all, what's funnier than seeing a bunch of A-list actors in period clothing doing full choreography to one of today's biggest hits?

"It's so humiliating," Anderson said, blushing as the clip finished playing. "I mean, the look on my face, there's such delight and shame."

"I would like to say both that I think you did a better job than Margaret Thatcher would've done and also acknowledging that I think that's a pretty low bar," responded Meyers, to which they both laughed. Clearly, The Crown should incorporate more choreography into Season 5. Free idea: Do "WAP" next.