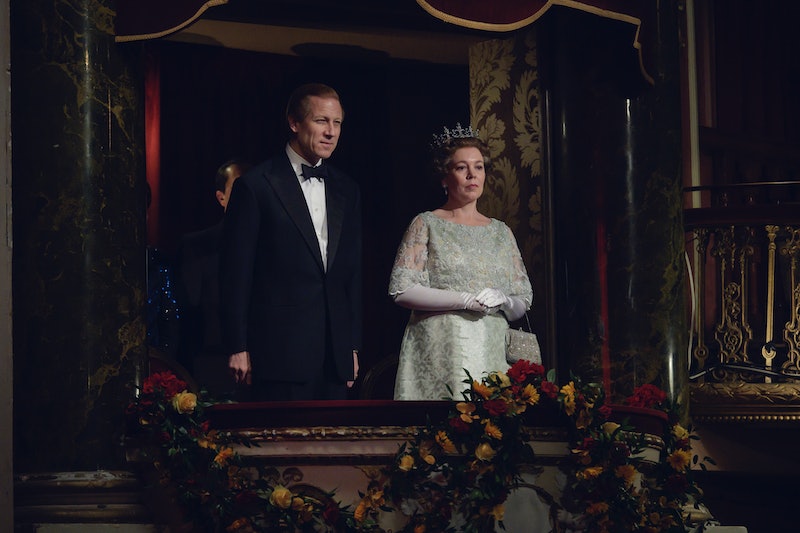 Nearly 40 years after she was first introduced to the public as England's future princess, Diana Spencer is coming to The Crown. Ahead of Season 4's November 15 premiere date, Netflix released photos of Emma Corrin as Princess Diana on The Crown, as well as the first proper look at Gillian Anderson as former Prime Minister Margaret Thatcher. The upcoming season — which will begin in the late 1970s — will center on Queen Elizabeth II (Olivia Colman)'s relationships with two other formidable women against the backdrop of a changing country.

"Change is coming," the streaming service teased on Twitter, along with several stills from Season 4. In the first, Anderson waves from the doorway of 10 Downing Street, rocking Thatcher's signature bouffant hairstyle and a stiff smile. The second photo shows Prince Charles (Josh O'Connell) escorting a young Diana to a royal event — reportedly a recreation of the Prince of Wales' 1987 birthday at the Royal Opera House — in which she wears a strapless purple and gold gown with a matching scarf.

Netflix also shared several photos of Corrin as Diana with Vanity Fair. In one of the stills, Diana wears a blue sweater vest while making eye contact with the paparazzi; in another, she stands shyly in Buckingham Palace, speaking with a butler while Charles watches from the background. According to the outlet, Diana's "coming of age" will play a key role in Season 4 of The Crown, which will take span from 1977 until 1990.

"You really see her turn from a girl into a woman," Corrin told Vanity Fair about her time as Lady Di. (Elizabeth Debicki will take over the role of Diana for The Crown's final two seasons.) "We see her before she goes into the palace, when she is living with her flatmates, and how normal she was before she was plucked from obscurity." In addition to chronicling the way that Diana shook up the royal family — and famously flouted royal protocol on multiple occasions — the new episodes will also delve into her tumultuous marriage with Charles, who was forced to end his relationship with Camilla Parker-Bowles (Emerald Fennell) at the end of Season 3.

For her part, Corrin said she believes that Diana "undoubtedly" loved Charles "to the very, very end," even despite all of the conflicts they faced in their relationship. "Honestly, that breaks my heart completely. [Creator Patrick Morgan] said, ‘Even when they were fighting and getting the divorce, her only concern was that Charles was all right.'" Morgan himself echoed those sentiments, explaining that "I don’t think she ever stopped loving Charles," but theorized that "she had grown to realize that marriage was impossible."

In addition to dealing with all of the ways that Diana — and her relationship with Charles — impacted the royal family and their relationship with the public, Coleman's Elizabeth will also face off against Thatcher, who was the same age as the queen. “When I found out that they were born only six months apart, that was a big breakthrough for me,” Morgan told VF about tackling the pair's "fascinating" and sometimes prickly relationship onscreen.

“Because of their generation, they had a lot of things in common — they’re both very resilient, very committed, work incredibly hard, have an extraordinary sense of duty," he continued. "They both have a strong Christian faith. They’re both girls of the war generation who switch the lights off when they leave a room. But then they had such different ideas about running the country."

More like this
'The Queen’s Gambit' Season 2 Tweet Wasn’t From Anya Taylor-Joy
By Mary Kate McGrath, Jack Irvin and Grace Wehniainen
'Bridgerton' S3 Will Show A *Very* Different Side To Kanthony
By Sam Ramsden
Twitter Is Burning As Phoebe Dynevor Reveals Daphne’s 'Bridgerton' Exit
By Sophie McEvoy
Helena Bonham Carter Doesn't Think 'The Crown' “Should Carry On"
By Sam Ramsden
Get Even More From Bustle — Sign Up For The Newsletter
From hair trends to relationship advice, our daily newsletter has everything you need to sound like a person who’s on TikTok, even if you aren’t.