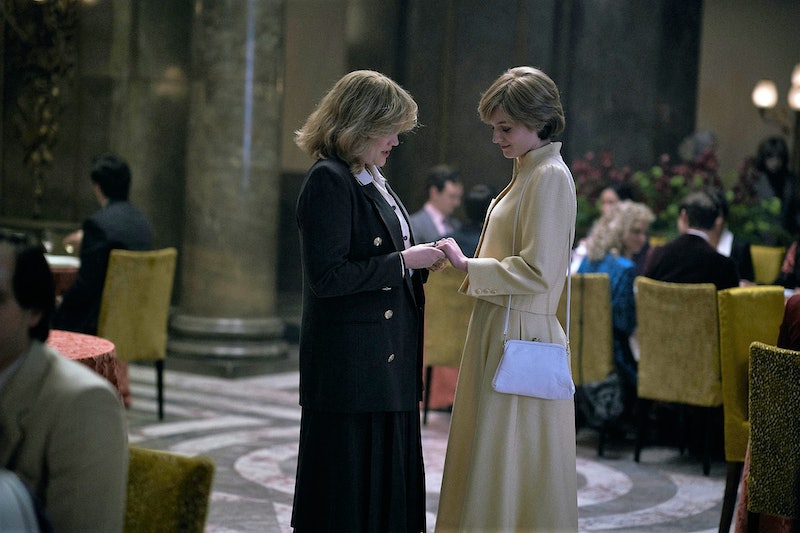 As Netflix prepares for the highly anticipated fifth season of The Crown — complete with a whole new team of cast members — Emma Corrin, who portrays Princess Diana in season 4 of the royal drama reflects on one of the most controversial depictions of the royal family in the series. In a recent interview, Emma Corrin shared the process behind the very uncomfortable scene that saw Lady Diana Spencer and Camilla Parker Bowles at lunch, amid Bowles's alleged affair with Prince Charles.

“It was one of the scenes we rehearsed quite a lot because there was a very specific dynamic,” said Corrin, in an interview with The Wrap.

Emma Corrin, Emerald Fennell, and Josh O’Connor portrayed Lady Diana, Camilla Parker Bowles, and Prince Charles from 1979 to 1991 in the royal drama. As many will remember, in an infamous television interview in 1995, Princess Diana told then BBC Panorama journalist Martin Bashir, that there were “three of us” in her marriage with Prince Charles.

“A world was created as if there was sort of a third person there anyway, as Diana put it,” Corrin said to The Wrap. “In my prepping for the scenes, I just always tried to bear in mind that (Diana) would be thinking, ‘Has he seen her recently?’”

To help master the tension between the two women, Corrin described to The Wrap, how director Benjamin Caron helped the trio convincing portray the fraught relationship between the royals.

“So how (Caron) did it was, he brought me and Emerald into a room and sat us down at either side of a table with loads of desserts,” said Corrin. “And he also brought Josh to the table. It was so funny. He asked us that any time we felt like we had the power in the conversation, to take Josh’s hand. Basically, the whole rehearsal was Emerald holding Josh’s hand and me trying to get my hand in there, which was so funny. Then to film it was amazing. It was a really intense scene — so much going on, so many dynamics.”

As it goes with The Crown, season 5 will see Corrin replaced and Princess Diana portrayed by Elizabeth Debicki.