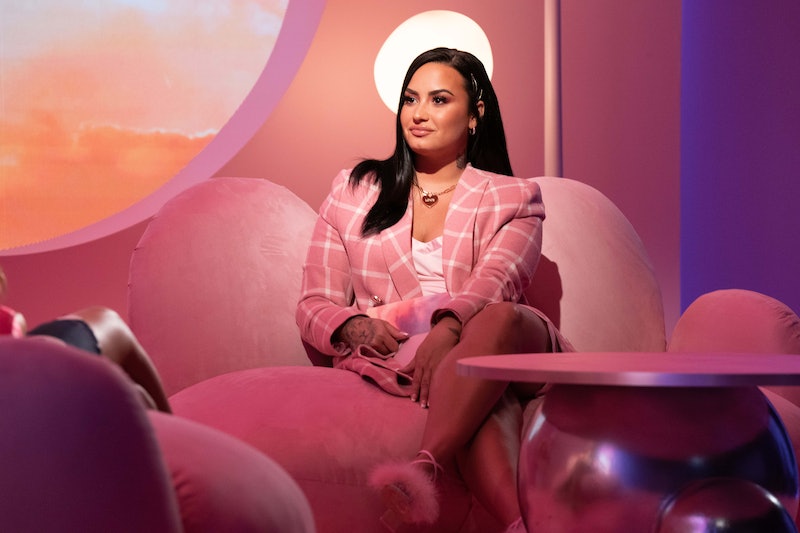 Nothing is off limits on The Demi Lovato Show. The Roku Channel’s short-form series, which will stream 10-minute episodes for free beginning on July 30, will feature Lovato in frank discussion with a range of celebrity guests and experts. Together, they’ll hit on “some of today’s edgiest social topics,” including police reform, feminism, trans rights, sex positivity, mental health, and even aliens.

“To say I’ve been through a lot is an understatement,” Lovato says in the trailer, streaming exclusively on Bustle below. “This show is a safe space for honesty and vulnerability, and I’m so grateful for everyone who’s joining me.” In addition to previously announced guests Jameela Jamil, Lucy Hale, and YouTuber Nikita Dragun, Lovato will sit down with X-Men star Olivia Munn, “FTP” rapper YG, ufologist Dr. Steven Greer, nutrition therapist Elyse Resch, and author and former monk Jay Shetty. Lovato’s close friends Sara Elizabeth Mitchell (aka Sirah) and Matthew Scott Montgomery will also appear.

The conversations are as raw as advertised. “If I had ended my life, there is so much I would've missed,” Munn shares in one clip. In another, Dragun says she thought she would never have a relationship as a trans woman. Elsewhere, Lovato chats with YG about the protest he organized against police brutality.

Lovato, who identifies as non-binary and uses they/them pronouns, shares plenty of their own story, too. When Sirah recalls turning on her phone to news of Lovato’s near-fatal 2018 overdose and thinking that Lovato died, the singer tearfully apologizes. And in a more lighthearted moment, Lovato reveals to Hale that they told their mom they’re a member of the mile high club.

“Some conversations can be difficult, but I’ve never been one to shy away from speaking candidly about things,” Lovato said of the talk show in a June statement. “We wanted to create a space that normalizes living your own truth — where people can speak, engage and more importantly, learn, together. There’s something therapeutic about having raw discussions that people can relate to.”

The Demi Lovato Show is just one of the singer’s many upcoming projects. Following the release of their YouTube docuseries Demi Lovato: Dancing with the Devil in March, Lovato launched their 4D with Demi Lovato podcast in May. Lovato also has a four-part Peacock docuseries about UFO phenomena, Unidentified with Demi Lovato, in the works, in addition to executive-producing and co-starring with Valerie Bertinelli in an NBC comedy series called Hungry, which follows a group of friends who belong to a food-issues group.