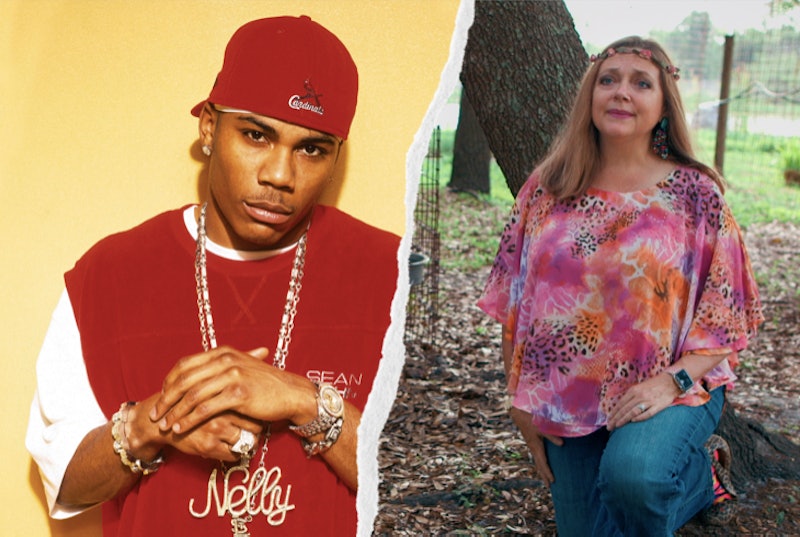 Hey all you cool cats and kittens, get ready, because the Dancing With the Stars Season 29 cast includes Carole Baskin from Tiger King. After much anticipation, on Sept. 2, Good Morning America revealed the entire cast of celebrities who will be dancing into the upcoming season of the reality competition series. As always, there's a wide range of famous faces putting on their ballroom dance shoes in hopes of taking home the 2020 mirror ball trophy.

From Tiger King's Baskin, to a former Bachelorette, to a star who's skilled at catching people cat-fishing, to several talented actors and singers, this season of DWTS might actually be worth watching — or at least, worth checking in on from time to time. (Just imagine the conversations between Baskin and Kaitlyn Bristowe.) The new season premieres on Monday, Sept. 14 at 8 p.m. EST on ABC and with new host Tyra Banks. In July, it was announced that the former America's Next Top Model star was taking over for long-time hosts Tom Bergeron and Erin Andrews.

"I’ve been a fan of DWTS since its beginning," she said in a statement when the big news was first revealed. "The fun mixed with raw emotion, seeing celebrities push past their comfort zones, the sizzling dance performances. It’s always transported me to my days of turning it up 10 notches on the catwalk." Banks also acknowledge Bergeron by adding, "Tom has set a powerful stage, and I’m excited to continue the legacy and put on my executive producer and hosting hats."

Baskin is, obviously, best known for appearing in Netflix's Tiger King, which first took the world by storm in March. She's come under much scrutiny after allegations surfaced that she murdered her second husband, Jack Donald Lewis, who has been missing since 1997 and was declared dead in 2002. Baskin has repeatedly denied that she had anything to do with Lewis' disappearance.

There were rumors Chrishell Stause was joining DWTS, and now it's official. Known for starring on several daytime soap operas, including All My Children, and now for her role in Netflix's popular reality series, Selling Sunset, about realtors in Los Angeles, Stause's schedule just got even busier thanks to Dancing.

Catfish fans will recognize Nev Schulman, who's been hosting the MTV reality series since 2012. The show is famous for being partly filmed by Nev and his co-hosts using small, handheld cameras, and, in these coronavirus times, who knows if he's been asked to act as a cameraman once or twice in rehearsals.

Nelly is ready to get hot in herre. The rapper is best known for tracks like "Country Grammar," "Hot in Herre," "Dilemma," and "Ride Wit Me." Fans will just have to wait to see how long it takes for Nelly to dance to his own music.

Backstreet Boys singer AJ McLean joining DWTS isn't a surprise. GMA previously revealed on Aug. 27 that he was part of the Season 29 cast. McLean has also already shared a photo on Instagram of him practicing in the studio. "We’re going for the mirrorball, baby!!" he partly captioned the behind-the-scenes image.

It was revealed back in June that former Bachelor and Bachelorette star Kaitlyn Bristowe would be joining DWTS. Actually, Chris Harrison surprised Bristowe by asking her if she'd join the competition during an episode ofThe Bachelor: The Greatest Seasons — Ever! She was thrilled and declared, "Yes yes! I'm so honored to say yes."

Monica Aldama is best known for Netflix's Cheer, a docuseries about competitive cheerleading. The series focused on Aldama's team at Navarro College, where she's been coaching for over 24 years. Between her coaching, choreography, and competition background, Aldama might be made for DWTS.

A former NFL star and Super Bowl champion, Vernon Davis is trading in his cleats for dance shoes. Based on past professional athletes, specifically football players like Heinz Ward and Emmitt Smith, Davis could end up winning the whole thing.

Anne Heche is best known for starring on both the big and small screen. From Chicago P.D., to Hung, to Six Days Seven Nights, she's has made a name for herself as an actor, so it will be interesting to see how she is as a dancer.

You might recognize Skai Jackson from Disney Channel's Jessie and Bunk'd, where she played Zuri Ross. She also wrote a book titled Reach for the Skai: How to Inspire, Empower, and Clapback. Jackson is the youngest competitor this season and her fellow celebs better watch out for her.

One Day at a Time's Justina Machado has also joined DWTS. Given her track record on ODAT — which was canceled by Netflix only to be saved by Pop — it's clear that Machado isn't one to count out.

Jesse Metcalfe has been on the small screen for years, including his time on Passions, Desperate Housewives, and, most recently, his work on the Hallmark Channel in a variety of movies and the drama Chesapeake Shores. Trying DWTS shouldn't be too out of his comfort zone — just get him that infamous Desperate Housewives lawnmower!

Jeannie Mai is an Emmy-winning host of The Real and sideline correspondent on ABC's game show, Holey Moley. Mai is also known for being a fashion expert and usually serving as a TV host, but this time around she'll be the one answering the questions after she's done dancing.

He already tried The Masked Singer and now Johnny Weir's ready to test the DWTS waters. His Olympic figure skating skills might work in his favor, but let's hope he has better luck and doesn't get eliminated first (like he did in Season 2 of The Masked Singer).

Charles Oakley is a former NBA star, who played for the Chicago Bulls, New York Knicks, Toronto Raptors, Washington Wizards, and Houston Rockets. Seeing as he had to be quick on his feet while playing basketball, Oakely might do well on DWTS.

DWTS is one of many series returning amid the ongoing global pandemic. And, like other movies and shows in production, Variety reported that the dance competition has implemented many health and safety protocols. Here's hoping everyone stays healthy and safe long enough that one of these celebs can actually take home the mirror ball trophy.