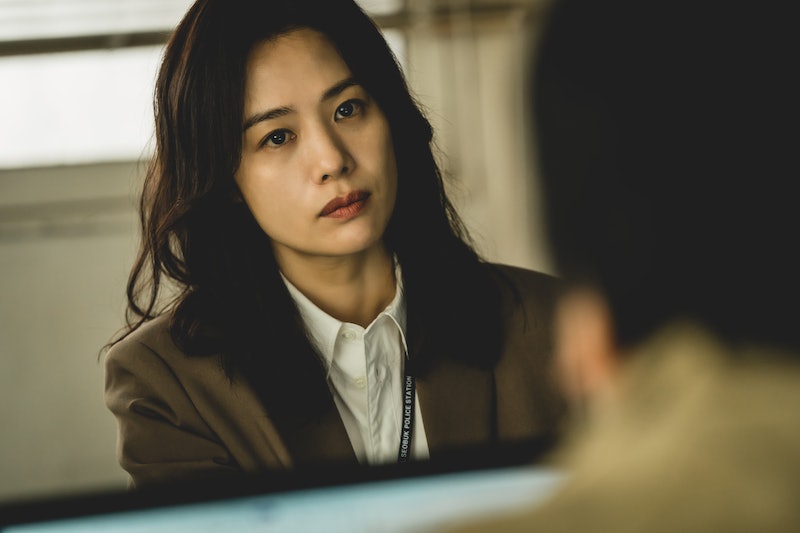 Spoilers ahead for Hellbound Season 1. Once an angel gives you a decree in Netflix’s Hellbound, it’s only a matter of time before three demons appear and drag your soul to hell. These very public “demonstrations” lead people to flock to a new religion called The New Truth, which proclaims the executions are happening because God has grown tired of sinners and wants people to be more righteous.

The New Truth takes over society within a matter of four years, but at the end of Season 1, it’s revealed their doctrine is wrong. In the final episodes of the South Korean thriller, we learn that the executioner’s victims are actually just random — confirmed most clearly when Toughie, a baby, is decreed to die. Toughie’s parents, So-hyun and Young-jae, are able to intervene and sacrifice themselves; moments later, a former victim, Jung-ja, appears to be resurrected in the very place where she was executed.

It’s a mysterious cliffhanger that will likely lead viewers to seek out answers in the Hellbound webtoon on which the show is based, which was written by series creator Yeon Sang-ho alongside artist Choi Gyu-seok. But while the ending of the Hellbound webtoon is indeed different from the live-action version, it’s because the show covers more ground. The six-part season runs through the entire 55-chapter plot of the webcomic. Both stories feature a time jump in the middle that switches from following Detective Jin to Sodo organization member Hye-jin, and both see Hye-jin beating back the New Truth lackeys and escaping with the baby in the end. There’s just one key change: Jung-ja’s resurrection is unique to the show.

"[Choi and I] decided on the ending for the Hellbound webcomic from the beginning, so we discussed the ending for the [TV] series while we were working on the webcomic," Yeon told the Korea Times. "We sought for ways to strategize the advantages of having the story's creator as the series' director, and came up with the idea to go with this ending only for the [TV] series."

He added that they have “yet to discuss” if they want to film a second season of the show, but that they plan to release a sequel to the comic in “the latter half of next year” that will basically include the story you would have seen in Hellbound Season 2 — including the answer to Jung-ja’s mysterious revival. “[The] message of the story will align with the first one but there will be changes in how it will be delivered,” Yeon said. “I can say that the new season [of the webtoon] will explore more on the actions and wrongdoings of the characters.” He also explained to Huffington Post Korea that he sees the Hellbound story as a trilogy.

The Hellbound webtoon was originally published on the South Korean platform Naver, and Part II wrapped up in September 2020. It’s currently being translated to English on Webtoon, with a chapter releasing every Tuesday. Only Part I is up so far — the equivalent of Episode 3 in the show — so unless you want to pay for more “fast pass” episodes, it may be quite a while until you get to the equivalent end of Season 1. Still, you can at least look forward to the final arc of the trilogy publishing some time in late 2022.

More like this
'The Queen’s Gambit' Season 2 Tweet Wasn’t From Anya Taylor-Joy
By Mary Kate McGrath, Jack Irvin and Grace Wehniainen
Ashton Kutcher Wants Danny Masterson “To Be Found Innocent” In Rape Retrial
By Jake Viswanath
Netflix Shut Down 'Bridgerton' S3 Rumours About A “Very Dark” Storyline
By Bustle
Everything To Know About A Potential 'Lockwood & Co.' Season 2
By Gretchen Smail
Get Even More From Bustle — Sign Up For The Newsletter
From hair trends to relationship advice, our daily newsletter has everything you need to sound like a person who’s on TikTok, even if you aren’t.