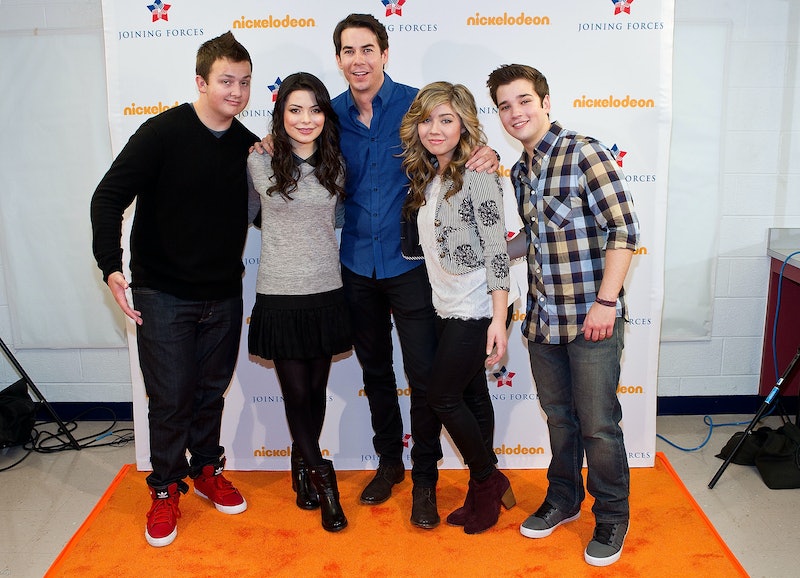 It's time to fire up your webcams and get ready for some random dancing — an iCarly revival, featuring the show's original cast, is heading to the Paramount+ streaming service. According to TVLine, stars Miranda Cosgrove, Nathan Kress, and Jerry Trainor (who played Carly, Freddie, and Spencer, respectively) are set to reprise their roles from the hit Nickelodeon show, which followed a group of teenagers who filmed a wacky web show while balancing internet celebrity and everyday life.

While it's unclear when the reboot will premiere — or even begin filming — the outlet reports that Paramount+ has ordered a full season of the updated iCarly. Three of the show's key players are already on board for new episodes, but Noah Munck — who played eccentric scene-stealer Gibby — and Jennette McCurdy were noticeably missing from the announcement. McCurdy played Sam Puckett, Carly's best friend and Freddie's eventual love interest from 2007 until 2012, and even landed her own spinoff series, Sam & Cat, in 2013.

McCurdy has not publicly commented on the iCarly revival announcement yet, but she did promote the second season of her podcast, Empty Inside, on her Instagram Story shortly after the news broke. "A few big thank yous to everyone who helped out with season 1 of Empty Inside," she wrote. "You guys are amazing! And an extra special thank you to all the empty inside listeners!! Season 2 coming soon."

McCurdy's reluctance to reprise her role as Sam Puckett isn't too surprising, as the actor has been open about her complicated relationship with the entertainment industry over the years. Sam & Cat was abruptly canceled in 2014 amid rumors of a feud between McCurdy and co-star Ariana Grande. While both have repeatedly denied any bad blood between them, McCurdy told Vulture in 2015 that the show ended in a "dramatic" fashion and that she and Grande "both had very different ideas of where [they] wanted [their] careers to go."

At the same time, McCurdy was also dealing with the death of her mother, Debra, and explained that she threw herself into work to distract from her grief. "Six days after my mom died I went back to work. I thought, 'Oh if I do this Vine video, or If I do this episode, if I hit every mark, then I'll be fine because I'll have something else to focus on,'" she told the outlet at the time. "But really I was just putting this huge life-changing event on the back burner and it was slowly causing me to unravel to the point where I would say I got to my lowest emotional point."

In 2019, McCurdy opened up about her years-long experience with disordered eating and the impact that being a child star had on her health in an essay for The Huffington Post. "As a child actress working in Hollywood, I quickly learned that remaining physically small for my age meant I had a better chance of booking more roles," she wrote. In the essay, McCurdy explained that the experience of starring on iCarly and having to be "on" all the time took a toll on her health. "I became even more fixated on food and my body. I monitored every bite I took. I exercised obsessively. I measured my thighs with a measuring tape every night before bed," she wrote.

Still, both McCurdy and Cosgrove have praised iCarly for kickstarting their friendship when they were just 14 and 13, respectively. "We did the show for so long and spent so much of our childhood together," Cosgrove told Bustle about her bond with McCurdy in 2016, revealing that the duo often had sleepovers at each other's houses, even as adults. "I feel like as the seasons went on, a lot of that came out on iCarly, like a lot of our real friendship because we were so close and we are still." It looks like those two are still closer than ever, even if Sam and Carly won't return to the small screen together any time soon.