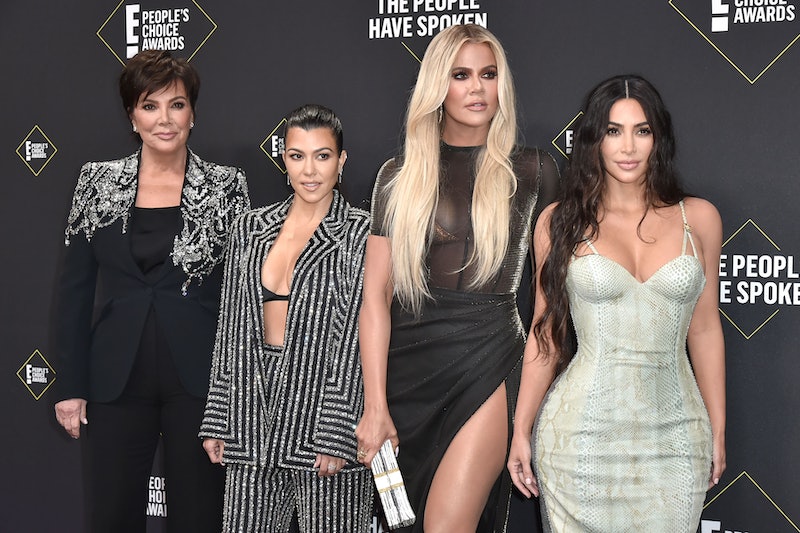 After 15 years and 20 seasons, the Kardashian family's long-running reality show has officially come to an end. On Friday, Jan. 8, the Kardashians celebrated Keeping Up With the Kardashians' final day of filming on social media, marking the end of an era with champagne, some very special cookies, and a backyard party with their beloved crew. "Last day of filming Keeping Up With the Kardashians EVER!" Kim wrote on her Instagram story, showing one of their crew members to highlight the hard work they've put into the series over the past decade and a half. "Erin's been our audio tech for 14 years!!"

In a video for E! News, the SKIMS founder toasted the end of the series from their wrap party. "We just finished filming forever, like ever, ever. We're done, we're never filming again — isn't that so crazy?!" Kim said, while raising her glass of champagne. "So we're having a drink with the crew in my backyard, hanging out. Cheers to... I don't know. 15 years, 20 seasons of craziness, and lots of love."

Kim wasn't the only one who poured a glass of bubbly to celebrate the end of the series. On her own Instagram story, older sister Kourtney — who revealed that she was "officially sobbing" over the end of the reality show — posted a photo of her champagne, where she noted that she was "grateful for every single second" of making the series with her family. Meanwhile, on her account, Khloé, showed off the cookies in the shape of everyone's faces that decorated the table at their soiree, as well as her celebratory coffee cup, which was emblazoned with "Happy Last Day!"

In September, the Kardashian-Jenner family announced on Instagram that KUWTK would end after Season 20, which will finish airing sometime in 2021. "After what will be 14 years, 20 seasons, hundreds of episodes and numerous spin-off shows, we are beyond grateful to all of you who’ve watched us for all of these years – through the good times, the bad times, the happiness, the tears, and the many relationships and children," Kim wrote on Instagram. "Without Keeping Up with The Kardashians, I wouldn’t be where I am today. ... This show made us who we are and I will be forever in debt to everyone who played a role in shaping our careers and changing our lives forever."

While the end of the show was "emotional" for everyone involved, matriarch Kris Jenner explained that the family felt it was just the "right time" to walk away from the reality franchise. "I think the number 20 ... it just seemed like the right time," she told Ryan Seacrest in September. "I think for us to take a minute and breathe and everybody slow down a bit. Not slow down professionally, but just you know figure out what our next steps are."

Kim echoed those sentiments a month later during an interview with Grazia, where she explained that she and her family haven't had a break from filming in over a decade, and needed some time to decompress. "It's really simple. We just need a minute to regroup," she explained. "We’ve gone in filming a season, then a spin-off, and I think there’s no other way to say it other than, we just live such big lives. We have kids now. And they need us. There’s so much going on that, even just for a minute, we need a break."

Despite the end of KUWTK, the famous family doesn't plan to walk away from reality TV forever. In addition to leaving the door open for a potential revival of their long-running series, in December, the Kardashians signed a multi-year deal with Hulu to produce "global content" beginning in 2021. While details about the famous family's new content have not been released yet, it's clear that they will likely be producing at least one new reality show for the streaming service going forward. In the meantime, fans will simply have to continue keeping up with the Kardashians on social media after the show's final episode airs later this year.