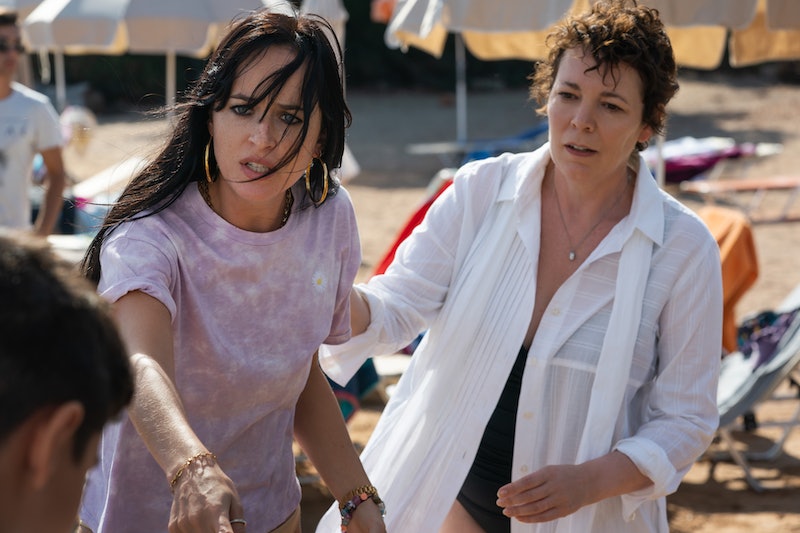 Following the success of HBO’s My Brilliant Friend, another Elena Ferrante work is headed to the screen. Olivia Colman and Dakota Johnson star in Maggie Gyllenhaal’s The Lost Daughter, an adaptation of Ferrante’s 2006 novel. Though fans of the book will undoubtedly find a lot to love in the new movie, it does feature a few key deviations from its source material — especially near the end. Major spoilers for Elena Ferrante’s The Lost Daughter and Maggie Gyllenhaal’s film of the same name follow.

The Lost Daughter centers on Leda, the book’s narrator: a middle-aged woman who finds herself alone for the summer after her daughters, Marta and Bianca, leave Italy to stay with their father in Canada. Leda doesn’t mourn her newly emptied nest, however. Instead, she plans a solo vacation for herself at the beach, where she meets Gino, a handsome lifeguard, along with a young mother, Nina, and her small daughter, Elena.

It’s no surprise that Gyllenhaal’s The Lost Daughter received its fair share of Oscar nominations in 2022. Colman is up for Best Actress, alongside Jessica Chastain (The Eyes of Tammy Faye), Penelope Cruz (Parallel Mothers), Nicole Kidman (Being the Ricardos), and Kristen Stewart (Spencer). Jessie Buckley, who plays a younger version of Leda in the film, has been nominated for Best Supporting Actress. The Lost Daughter also sports a Best Adapted Screenplay nod, with Coda, Drive My Car, Dune, and Power of the Dog also in the running.

At first glance, the book and the movie appear to end similarly. But Gyllenhaal’s film omits a key scene from the book, which changes viewers’ interpretation of the ending entirely.

Below, read how The Lost Daughter book ending compares to the movie.

How Does The Lost Daughter Book End?

Ferrante’s novel opens with Leda falling asleep at the wheel after experiencing a recurring, burning pain in her side. She dreams of the beach, of facing a potentially dangerous tide — marked by a literal red flag — and feeling conflicted over whether she should remain on dry land or wade into the water. When she wakes, Leda finds that she’s been admitted to the hospital following a minor motor vehicle accident. “The only serious injury,” she tells us, “was in my left side, an inexplicable lesion.”

As Leda recovers, she recalls the events of her summer vacation, which had just come to an end before her accident. Watching Nina, Elena, and their relatives interacting by the sea seems to have dredged up some grim memories that Leda hasn’t processed. From these recollections, we learn that Leda had an unhappy childhood — and she wasn’t happy to be a mother, either. From the novel:

“As an adult I tried to keep in mind the misery of not being able to handle the hair, the face, the body of my mother. So when Bianca was a small child I patiently became her doll.... I was very tired, I remember: Marta wouldn’t sleep at night, only during the day, and then only a little, and Bianca was always around me, full of demands ... complicating my existence even further. Yet I tried to keep my nerves under control, I wanted to be a good mother. I lay on the floor ... and when she pulled my hair I started, and woke. I felt my eyes tearing with pain.

“I was so desolate in those years. I could no longer study, I played without joy, my body felt inanimate, without desires. When Marta began to howl in the other room it was almost a liberation. I got up, rudely cutting off Bianca’s game, but I felt innocent, it wasn’t I who was leaving my daughter, it was my second-born who was tearing me away from the first. I have to go to Marta, I’ll be right back, wait. She would begin crying.”

When Leda wakes up one day to find Nina by the shore, frantically searching for Elena, she gets caught up in two memories: one of being lost as a child, the other of searching for a young Bianca while Marta cried in her arms. “I was crying, too,” she says, recalling Bianca’s eventual recovery, “with happiness, with relief, but meanwhile I was also screaming with rage, like my mother, because of the crushing weight of responsibility, the bond that strangles.”

Leda eventually finds Elena and returns her to Nina, but the girl will not stop crying — not because of the trauma of her ordeal, but because she has lost her beloved doll, Nani, somewhere on the beach. It’s only after Leda says her goodbyes to a grateful Nina that we learn the truth: Leda found the doll, as well, but decided to take it home with her. She waffles on whether or not to give the toy back to its rightful owner, but ultimately decides to keep Nani.

As days go by, Leda becomes increasingly convinced that Nina is a younger version of herself: an aspirational young woman trapped by motherhood and the societal expectations it brings. When she learns that Nina is having an affair with Gino — who wants permission to use Leda’s vacation home for their rendezvous — Leda asks to speak to Nina one-on-one.

When Nina’s answers appear to confirm her suspicions, Leda offers to help her leave her husband and daughter behind in Naples and continue her studies near Leda’s home in Florence. Nina seems receptive to the idea, which prompts Leda to go one step further and reveal her role in Nani’s disappearance.

Outraged by this betrayal, Nina flies into a rage. Saddened by her response, Leda tells her that the vacation rental is hers to use — Leda is leaving the shore. Nina storms out, but not before she stabs Leda through the side with a hatpin — a gift from Leda herself. She takes Nani with her and leaves the keys behind.

Physically and emotionally wounded, Leda packs her things and starts to make her way homeward. As she departs, she receives a call from her daughters, who ask how she’s doing. Leda’s response is the final line of the novel: “I’m dead, but I’m fine.”

How Does The Lost Daughter Movie End?

Gyllenhaal’s film opens with Leda’s (Colman) car crash. Instead of waking up in the hospital, however, a dazed Leda makes her way down to the beach. Much like the book, the movie tells Leda’s story in flashbacks in the aftermath of her accident.

The events of the novel play out on screen relatively unchanged, save for a few Anglicized names. Nina (Johnson) still has an affair with a lifeguard (Paul Mescal), who is called Will in this version, and she still stabs Leda with the hatpin.

After the stabbing, Leda leaves and crashes her car, just as in the book. What’s different is what happens next.

In Ferrante’s novel, Leda remains unconscious throughout the accident and wakes only once she’s in the hospital. The movie version sees Leda, all dressed in white, walk down to the beach under her own power. There, she takes the phone call from her daughters as the credits roll.

What Should You Make Of The Differences?

Both versions of The Lost Daughter leave Leda’s fate open to interpretation. Is she really dead — or dying — from the stab wound, which is more serious than she first thought? In the book, Leda makes it to the hospital, but later tells her daughters that she’s dead. In the movie, Leda doesn’t go to the hospital (at least not on-screen), but she also doesn’t say the critical line: “I’m dead, but I’m fine.”

So what really happened to Leda at the end of The Lost Daughter? In both the novel and the film, you’re asked to draw your own conclusions.

More like this
Here’s Everything Coming To & Leaving Netflix In February
By Jake Viswanath
11 Movies To Watch At The 2023 Sundance Film Festival
By Chloe Foussianes
Yes, You Can Stream ‘To Leslie’ In The UK Now
By Sam Ramsden
The Best Memes & Tweets From The 2023 Golden Globes
By Alyssa Lapid
Get Even More From Bustle — Sign Up For The Newsletter