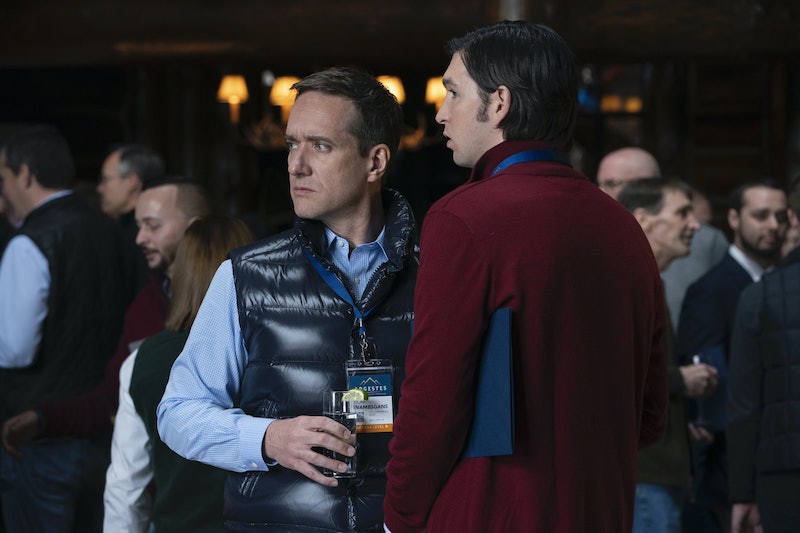 If you’ve been keeping up with Succession so far, you know that Tom Wambsgans is half of one of the show’s angstiest, most compelling relationships — fraught with push-pull power dynamics, betrayal, and impossible tension. He is also married to Shiv Roy.

That’s right: It’s Tom and Greg’s bromance that is maybe Succession’s greatest love story, brewing since the young Hirsch first entered the Roys’ twisted web. Though they come from different worlds, they clash in the best way — and discover they have more in common than not, thanks to their shared status as not-quite-part-of-the-family members. Tom and Greg’s hilarious blend of heartfelt moments and clumsy, cringey conflict even earned Matthew Macfadyen and Nicholas Braun their first respective Emmy nominations ever, both as supporting actors — and there’s sure to be even more unforgettable moments in Season 3.

The pair has bounced back from drama before (read: the safe room meltdown) — but now that Greg’s finally put those stashed-away cruise docs to use, potentially incriminating Tom in the process, we’ll have to wait and see whether their relationship can weather another storm. As we head into Succession Season 3, here are some of the most delightfully awkward moments between Tom and Greg so far.

By the end of Season 2, Greg’s leveled up his life, style, and business acumen. But when he first started working at Waystar Royco, he was living in a youth hostel, packing food in dog poop baggies (“It’s not like they pre-poop them,” he explains), and wearing the wrong footwear to work, much to Tom’s horror. “Forgive me,” Tom says, “but are we talking to each other on the poop deck of a majestic schooner? Is the salty brine stinging my weather-beaten face? No? Then why the f*ck are you wearing a pair of deck shoes, man?”

But Tom’s not all about punching down — he quickly prescribes a shoe rec before asking his colleague, “where we might put the talented Mr. Greg,” setting into motion Greg’s swift climb up the corporate ladder.

As Greg drives his grandfather (Logan’s brother) down from Canada for Thanksgiving, Tom calls him and asks when he’ll be at the office — and isn’t super formal about it. “Oh, Greg, f*ck your grandpa,” he says, before Greg reveals that he’s actually on speakerphone. “Well, I shouldn’t be, Greg.” It’s super awkward, but maybe also sweet in its own twisted way? Through his speakerphone snafu, Tom showed that he was comfortable enough to cuss it up with Greg — a sort of hostile chumminess he doesn’t have with the rest of the family.

“Have You Ever Visited The California Pizza Kitchen?”: Season 1, Episode 6

Tom and Greg’s first night out was fumbled before it even started. First, the (rightfully) wary Greg simply can’t believe the invitation — “I thought you were going to say, ‘take you out and beat the sh*t out of you,’ or ‘take you out a put a bullet through your dumb f*cking brain,’ or something else, you know, funny.” Then when Greg reveals he was planning to get some California Pizza Kitchen with his first paycheck, Tom laughs in his face. “You probably have quite an under-educated palate,” he tells his new colleague, before whisking him away to a much weirder (and way more expensive) restaurant for the evening. Poor Greg deserved that CPK.

The last time Macfayden went for an early-morning jaunt on the English countryside, it was to profess his love for Keira Knightley in Pride & Prejudice. This time around, the scene plays out a little less dreamily. On the morning of Shiv and Tom’s wedding, Greg tracked down Tom to deliver the information that Shiv was cheating on him. Tom (surprise, surprise) doesn’t want to hear it. “No, you’re wrong. Shut up, Greg,” he says, before putting his hand over Greg’s mouth, slapping him in the face, and pummeling him to the ground. Denial much?

While Tom and Greg took refuge during the ATN shooting scare, their “safe room” quickly spiraled into a violent, close-quarters situation — all because Greg suggested leaving the network but maintaining a “business open relationship” with Tom, which, of course, reminded Tom of his situation with Shiv. Tom then pelts poor Greg with water bottles in a show of something he calls “executive-level business.”

After the drama cools down and ATN is given the all-clear, Greg reveals that he didn’t actually burn up all those dangerous documents (oops!) and floats the idea of blackmailing Tom with them. It works — but instead of being horrified, Tom is in awe of his protégé’s budding ruthlessness. “You’re a f*cking slimeball! Atta boy,” he says.

As the rest of the family faced some pretty serious drama during the Argestes conference — the breaking of the cruise story, the crumbling of the Pierce deal — Greg and Tom dealt with their own dilemma: changing the ATN slogan in Tom’s talk from “We’re listening” to something a little softer. As Greg explains, the company’s tech devices do, in fact, listen and collect data — so the pithy catchphrase is just way too literal. Watching the pair workshop potential fixes (like, “We hear you”) before arriving at the ham-fisted final, misspelled slogan, “We here for you,” is cringey goodness.

“You Can’t Make A Tomlette Without Breaking Some Greggs”: Season 2, Episode 9

The Senate hearing for Waystar Royco’s cruise scandal proved that Tom and Greg are better together — but then, we already knew that! When apart, they make fools of themselves (like, more than usual). See: Tom testifying that he doesn’t know Greg before copping to sending him emails subject-lined, “You can’t make a Tomlette without breaking a few Greggs.” Followed by Greg’s own foot-in-mouth moment at bat: “If it is to be said, so it is.”

Here’s to many more Tom and Greg gaffes in Season 3 of Succession, premiering Oct. 17.