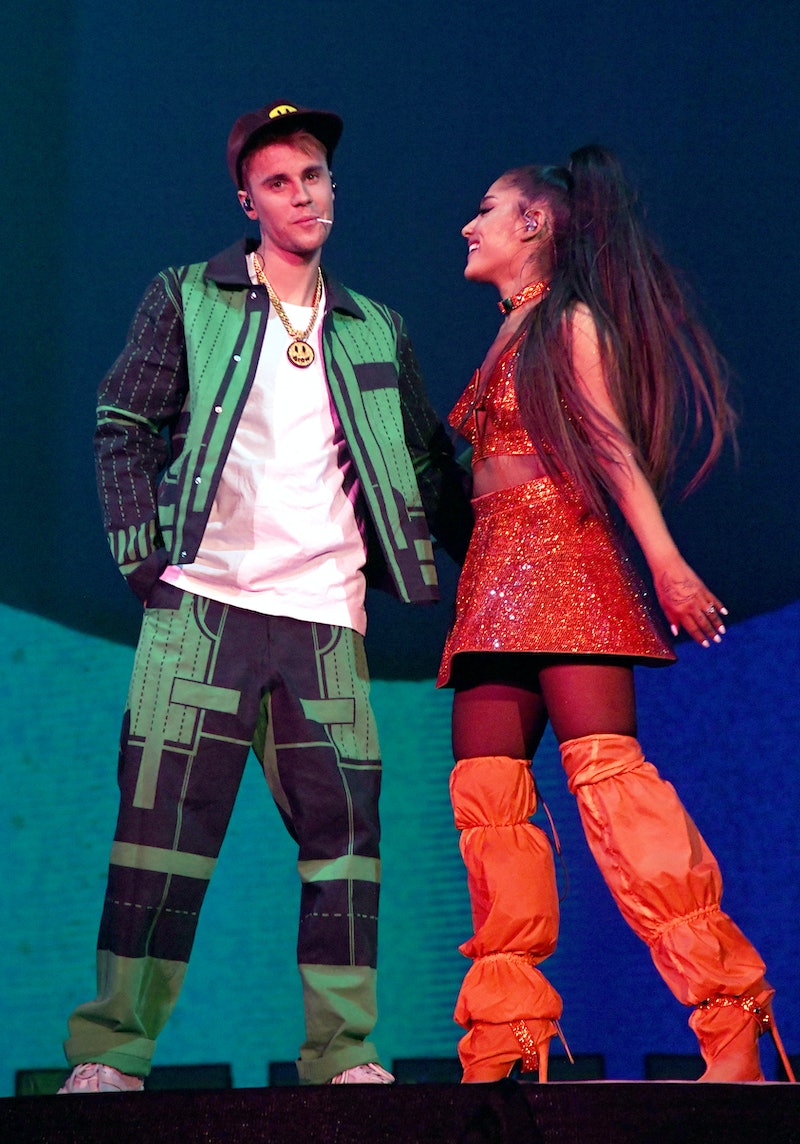 Award shows are looking completely different this year, but the People's Choice Awards are sticking to the tried and true formula of being a show that's voted on by the fans. The PCAs will air on Sunday, Nov. 15, and they will determine the public's preferred choices in music, TV, film, and even social media. The Social Celebrity award is a particular point of contention, given that it will uncover which celebrity is actually the most social star on the internet.

The nominees include everyone from musicians and reality stars to athletes; Justin Bieber, Selena Gomez, Ariana Grande, LeBron James, Kylie Jenner, Kim Kardashian, Lady Gaga, and Britney Spears are all up for the trophy this year. But fan opinions aside, who is really the most social celeb of 2020? Fortunately, we've done the heavy lifting and investigated all of the A-list nominees and their social media accounts. Without further ado, here are our findings.

With over 200 million followers in the span of a few years, Grande is one of the fastest-growing celebrities on Instagram, and for good reason. She provides a regular supply of candid selfies, glamour shots, and in-depth looks at her creative process, sometimes sharing snippets of new songs before she's supposed to. The singer also uses her massive platform for good; this year, she posted essential resources about voting and founded an animal rescue that matches pets with their homes through the power of social media. Ultimately, she knows what her fans want: endless photos of her many dogs, including Byron, Strauss, and Toulouse.

Spears arrived late to Instagram, as evidenced by her relatively low follower count (in her defense, she was the most followed person on Twitter at one point, so her social media power should not be questioned). However, she more than makes up for it with inspirational quotes, rapid-fire fitness routines, impromptu fashion shows filmed in her hallway, and improv dance videos set to the likes of Beyoncé. Britney's social presence also plays a role in the #FreeBritney movement, with some concerned fans thinking she sends clues through her clothing choices. But one thing's for certain: The pop star's social presence is genuine. Does she post like your aunt on Facebook? Maybe. But Spears' Instagram page is refreshing for a celebrity: unfiltered, relentlessly joyful, and so wholesome it can lift you up at any moment.

Bieber is known for taking social media hiatuses when he's not promoting new music, but when he's on, he's on. The singer frequently posts snapshots with his wife, Hailey, and sometimes he'll share personal letters to his fans on his Instagram feed. For the most part, the pop star uses social media to promote new music, TV appearances, and his Drew House clothing line. However, he's also one of the few celebrities who hosts his own reality show on Facebook Watch. On Twitter, Bieber is the most followed of any celebrity on this list; his 113.1 million followers are second only to Barack Obama. Whatever he feels like posting, Beliebers and non-Beliebers alike eat it up.

Selfies have become an integral part of Kim Kardashian's brand, so it's no surprise that her Instagram following is sky-high at over 191 million followers. Naturally, her IG is all about promoting herself and her many brands, with family snapshots thrown in for good measure. But what was once an inspirational haven has become a source of contention, as Kardashian has been criticized for cultural appropriation multiple times after sporting braids on Instagram and initially naming her SKIMS shapewear line KIMONO. Most recently, she received backlash on Twitter for posting photos from her private island vacation amid the COVID-19 pandemic.

The one person that can give Kardashian a run for her money on social media is her own sister, Kylie Jenner. The youngest Kardashian-Jenner family member has 9 million more followers than Kim, and her page is full of glamorous photoshoots, vintage throwbacks, and promotion for Kylie Cosmetics. The reality star also doesn't hold back from sharing snapshots of 2-year-old Stormi. Like her older sister, Jenner tends to spark online discussions among critics when she jets off to another country in the middle of a pandemic or is accused of cultural appropriation. She isn't changing the Instagram game, but when it comes to the Kardashians' social media, Kylie is certainly leading the pack.

Like the artist herself (and her Las Vegas residency show), Lady Gaga's Instagram page is an enigma. One moment she's promoting her Haus Laboratories makeup line, and a few days later she's recreating the sandwich scene from her "Telephone" music video to encourage people to vote. The singer has always been good at keeping fans on their toes, but whether she's posting a simple selfie, encouraging self-care, organizing a worldwide fundraiser, or posing in distorted avant-garde photoshoots, we can always count on Gaga to remain Gaga.

If you're looking for a dose of motivation and empowerment, look no further than LeBron James' Instagram. The legendary basketball player often reminds followers of the records he broke as a Laker, such as having the most wins in NBA playoff history. While bragging about your achievements could be seen as an eye-roller, James avoids that thanks to his persistent activism. The athlete uses his platform to encourage young Black children and raise awareness for Black Lives Matter, proving he's an inspiration to fans on and off the court.

In 2016, Gomez became the most followed person on Instagram when she reached 70 million followers. But after a few social media breaks, Grande and Jenner surpassed her in total followers. Fortunately, Gomez's social presence, which boasts 67.6 million likes on TikTok, is no less impactful. In addition to promoting her music, Gomez draws attention to causes she really cares about. In June, she gave control of her Instagram account to Black activists so they could share their stories and raise awareness for Black Lives Matter. Ahead of Election Day, the singer consistently reminded her fans about the importance of voting.

Every celebrity nominated in this category has a valid claim to the prize — especially those who've used their platforms for good. And while follower count is usually a good indicator of who the most social celebrity might be, it's truly anyone's game. As of now, fans will have to tune in to the 2020 PCAs on Sunday, Nov. 15 to find out the winner.