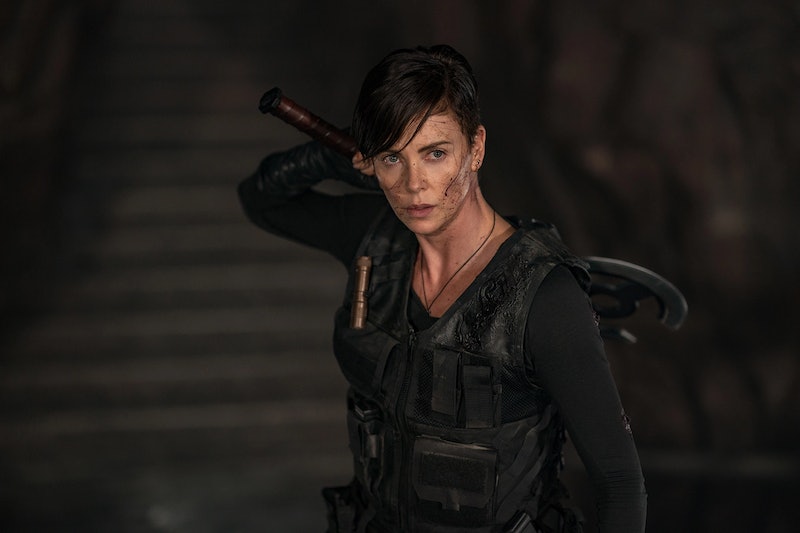 Over the past few years, Oscar-winner Charlize Theron has transformed herself into arguably the world's leading action star. After dazzling fans with her performances in Mad Max: Fury Road, The Fate of the Furious, and Atomic Blonde, Theron is headlining the latest Netflix action movie, The Old Guard. Theron plays the leader of an immortal group of warriors in the film, and The Old Guard ending certainly makes it look as if this movie could be the start of a new franchise.

The rest of this piece contains spoilers for The Old Guard.

In the film, Theron is Andy, a centuries-old immortal and the first of her kind. Over thousands of years, Andy plays a critical role in securing humanity's future by protecting those whose lineages are destined to do great things. She also picks up a number of other immortals along the way, showing them how to adapt to living forever and recruiting them to help her on her missions. As the story picks up, Andy recruits the newest immortal — a young U.S. Marine named Nile (Kiki Layne) — and begins to teach her about the history of the group. And one story that she tells is particularly heartbreaking.

For many years, Andy was the only one of her kind. Forever staying the same age and incapable of dying, she was forced to live her life alone, knowing that anyone she got close to would eventually grow old and pass on. One day, she found another immortal, a woman named Quynh (Veronica Ngo). The two become as close as can be, fighting many battles together over the years. But then, hundreds of years ago, they were captured and tried as witches. After their captors realized that the duo could not be killed, they came up with a solution to separate them. They locked Quynh in an iron box and threw her into the ocean. Andy was able to escape and she spent the next five centuries combing the ocean in the hopes of finding and rescuing Quynh, knowing that since she couldn't die, Quynh was going through untold suffering by having to drown day after day for all time. But alas, Quynh was never found, and Andy blames herself.

The main plotline of the film deals with Andy and her group escaping yet another capture, this time by a shady pharmaceutical group that was looking to exploit their powers. When it's all said and done, the group expels one of its members, Booker (Matthias Schoenaerts), as it was he who had led them to be captured. His punishment is exile from the group next hundred years. At the very end of the film, we see that he's not doing so well in isolation. He stumbles into his home drunk, where he finds a most unexpected face waiting for him. It's Quynh. She has somehow escaped from her oceanic prison and seems to be doing quite well for herself. Her reasons for being in Booker's home are cryptic, as all she says is: "Booker, it's nice to finally meet you."

So what does this ending mean? Well, at the very least, it means that there is a very obvious jumping-off point for a potential sequel. With Quynh now back in the fold, it seems unlikely that she's looking to have a joyful reunion with Andy where the two of them can catch up. In all likelihood, she is very angry at her old partner and is looking to get revenge on what she probably views as her half-millennium of abandonment. Having a fellow immortal/old friend of Andy's as the villain in a sequel would certainly take the film in a different direction than its predecessor, which is exactly what a good sequel should do. And if The Old Guard does end up spawning a sequel, then there's no telling how far this new franchise could go.