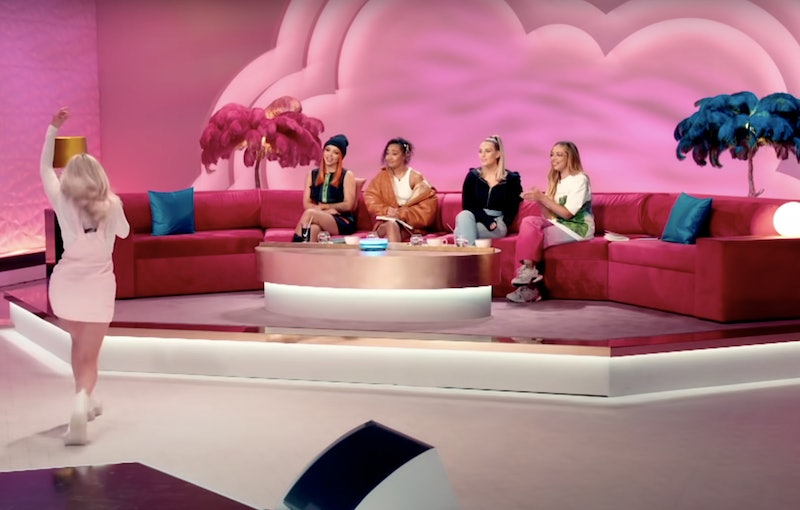 Little Mix premiered their brand new BBC talent show The Search on Saturday, Sept. 27 with a bubblegum pink set, plenty of laughs, and heaps of fresh talent. The UK's fave girl group are finally getting a taste of what it's like to be in the judges' seat and will mentor a group of young popstar hopefuls on the reality show. And one aspect that Little Mix is really concerned about is aftercare and ongoing mental health support on the show. The band have said their contestants will be "looked after properly" – but what exactly will this entail?

The young contestants will have access to a "full-time welfare team" and clinical psychologists "before, during, and after filming," says BBC News. The Search's support package also includes online meditation sessions and socially-distanced workouts with personal trainers.

Little Mix's aim seems to be a kinder approach to reality TV talent shows. "We didn't have that, really, on the show that we came from," says Leigh-Anne Pinnock, per BBC News.

Little Mix — made up of Pinnock, Jesy Nelson, Perrie Edwards, and Jade Thirlwall — is one of the biggest acts to come out of UK reality television. They became the first group to win the X Factor in 2011 and have released hit after hit, now totalling 50 million record sales.

However, despite their success, the band members have all spoken about the difficulties that have come with fame. Jesy Nelson's powerful BBC documentary Odd One Out revealed the horrific effects of the online abuse and trolling she's experienced throughout her time in the group. As Bustle reported in 2019, Nelson described winning The X Factor as "the worst day of [her] life," as it was when the nasty comments regarding her appearance really began to escalate. The singer said she became addicted to checking negative criticism about herself and it had a disastrous impact on her mental health.

During the height of the Black Lives Matter movement, Leigh-Anne Pinnock spoke about her experiences with racism throughout her time in the group in a candid Instagram video shared earlier this year. "So much shit will happen to you — stuff that’s off camera, and nobody knows about. It won’t always be easy," said Leigh-Anne Pinnock, in a post to Bustle in 2019. Meanwhile, Edwards has spoken out about suffering with anxiety and Thirlwall has had mental health struggles too.

It's these difficult experiences that have made Little Mix insist on aftercare for The Search's contestants.

“Our aftercare for these contestants is so important to us because we didn’t really get that. We never had anyone checking on us to see how we were doing mentally, it was all just go, go, go. I personally don’t feel like there was anyone who cared,” the group said to the Radio Times.

Pinnock added: “There’s a lot more awareness now about mental health, but people still just see the pop, the smiles, and the stage, and they don’t really understand what goes on. I kind of wish there was a lot more help along the way.”

More like this
This Pre-'Love Island' Video Of Olivia & Zara Together Changes Everything
By Bustle UK
Twitter Can’t Make Up Its Mind About Ekin-Su’s 'Dancing On Ice' Skate-Off
By Sophie McEvoy
Twitter Is Saying The Same Thing About Ekin-Su’s 'Dancing On Ice' Debut
By Sophie McEvoy
Turns Out George Clooney Is A Huge Fan Of This Classic British Game Show
By El Hunt
Get The Very Best Of Bustle/UK
Sign up for Bustle UK's twice-weekly newsletter, featuring the latest must-watch TV, moving personal stories, and expert advice on the hottest viral buys.