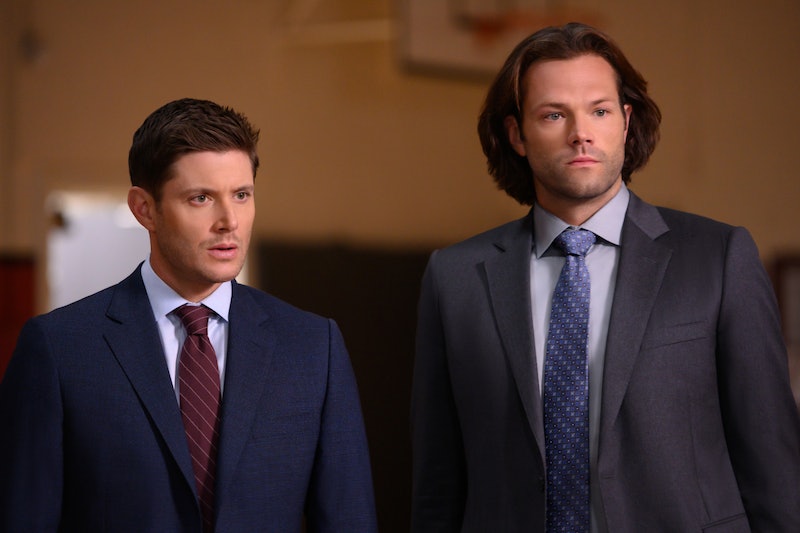 Sam and Dean have finally reached the end of the road, but before they lay their weary heads down, they're going to have to face God himself. In the trailer for Supernatural Season 15's final episodes, the boys do just that, and it immediately becomes clear that saving the world from its creator is going to come at a price. "I control space and time. They think they can kill me?" God/Chuck ponders in the teaser.

If the boys want to save all of humanity, that's exactly what they're going to have to do. And given how many times he and Sam have saved the world before, Dean isn't too concerned about the odds being stacked against them, even though Billie warns him "there won’t be a moment to waste" once God unleashes his wrath on Earth. "What else is new?" he cracks.

While the trailer for the seven remaining episodes of Season 15 is intense, it also offers up a glimpse at the last handful of jobs the Winchesters will be working as they devise a plan to stop God from ending the world. It also teased the final return of young Sam and young Dean in an episode they may include the first hunt the boys ever went on together. The news of flashback-heavy episode was teased by TVLine in February, so fans are more than ready to see it finally come to the screen.

Season 15 of Supernatural was originally set to end in May, but due to the coronavirus pandemic, five of the filmed episodes couldn't air because the sound and effects hadn't been finished. Additionally, the final two episodes of the series hadn't been filmed at all, leading to episode 13 serving as the de facto finale for Season 15 part one. Now, months later, Jensen Ackles and Jared Padalecki have revealed on Instagram that they're preparing to film the final episode after a 14-day quarantine in Vancouver. Both stars of the long-running series shared emotional messages for the fans in the last weekend of August, but Ackles' video was extra poignant.

In the video, he's seen holding up the script to the last episode. "So last night we completed 326 episodes of Supernatural. And at the very end of every one of those scripts are three words: To be continued," he said. "Today we start episode number 327 and at the very bottom of the very last page of this script, there are only two words." Ackles then carefully shows that at the bottom of his script it says "The end."

While Ackles' aim seemed to be to utterly destroy fans, Padalecki opted for a simple photo of himself giving a thumbs up to the camera. "As I head out to the first day on my LAST season finale, I can’t help but be incredibly grateful for all that #Supernatural and the #SPNFamily mean to me," he captioned the pic. "It’s been an incredible journey, to say the least. I, for one, am hoping that #SupernaturalNeverDies."

More like this
An 'Everything Everywhere All At Once' Star Just Joined The 'Loki' Season 2 Cast
By Grace Wehniainen
Nicola Coughlan Shared A Lady Whistledown Excerpt From ‘Bridgerton’ Season 3
By Grace Wehniainen, Alyssa Lapid and Sam Ramsden
'The Rings Of Power' Episode 4 May Put A Face To Season 1’s New Villain
By Kadin Burnett
The New Bachelor Will Be Announced Next Week & Here Are The Top Contenders
By Grace Wehniainen
Get Even More From Bustle — Sign Up For The Newsletter