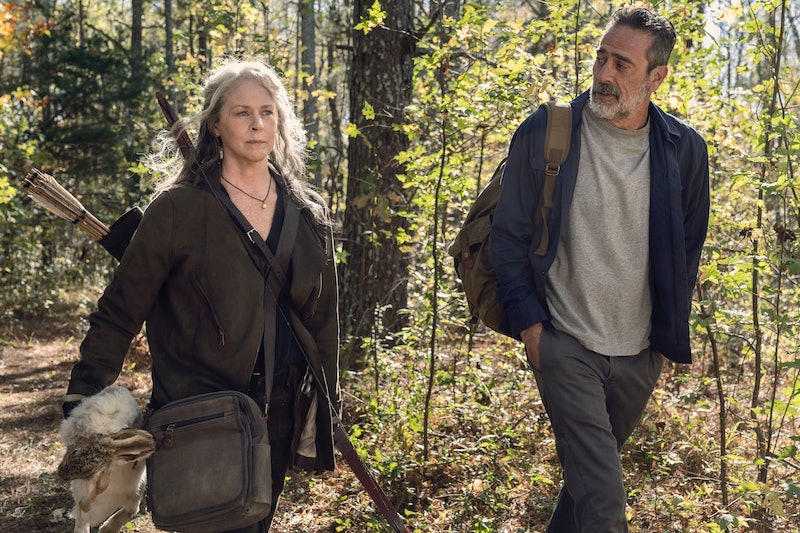 Spoilers ahead for The Walking Dead Season 10. Season 10 of The Walking Dead concluded with a handful of smaller, character-based episodes. That might be a good thing because viewers will need some breathing room before approaching the potentially enormous conflicts that Season 11, the final chapter, has in store. The upcoming season comes with the tall order of wrapping up the survivors’ stories in a fulfilling way, except for Daryl and Carol, who will have their very own spinoff. Even with a whopping 24 episodes, there are several loose ends to tie up and new threats we haven’t even fully discovered, like the Commonwealth. Here is everything we know about Season 11 so far, including its premiere date, trailer, cast, and more.

Based on their tension in the Season 10 finale, it looks like Negan and Maggie may be due for a face-off in Season 11. As Carol warned, Maggie’s out for blood. But that’s not the only conflict we can expect to see in the episodes ahead. Season 10C, though smaller in scale, effectively teased two new threats: the mysterious Reapers (originally part of the Season 11 plan, according to an Insider interview with showrunner Angela Kang) and the highly advanced and armed Commonwealth. Whatever the new episodes bring, expect some deviation from Season 10C, which was shot with smaller groups and sets with COVID safety in mind. Kang told Deadline that Season 11, which began filming in February, was a return to “bigger, scope-ier type of stuff, like giant builds and tons of stunts and everything.”

In addition to returning characters (none of the core survivors died in Season 10C), at least one member of the Commonwealth community has been announced so far. Michael James Shaw, who appeared in Avengers: Infinity War and Endgame as one of Thanos’ fighters, Corvus Glaive, was cast as Mercer, he announced on Instagram. As reported by Entertainment Weekly, Mercer had a military background pre-apocalypse and serves as “chief officer of the Commonwealth soldiers,” and he also had a relationship with Princess. Perhaps that’s a hint that Princess and her friends make it out of Commonwealth custody.

One memorable character from Season 10C, Leah (played by Lynn Collins), has not been confirmed to return for Season 11. But as Kang teased to Entertainment Weekly, “I'll just say to watch season 11 as that comes along.”

AMC released the official trailer for The Walking Dead’s final season on July 24 — and it’s intense. There’s a gnarly walker bite, a new masked enemy, and a very worrisome yelp from Dog (uh oh). Plus, an apparent commercial for Lance Hornsby and the Commonwealth serves as the trailer’s mic-drop moment. It looks like we will finally meet the highly anticipated community, which is advanced enough to have things like restaurants, practicing lawyers, and other pieces of the “past.”

Before the trailer dropped, mysterious teasers on the show’s Twitter account were the first glimpses at the inner workings of the Commonwealth from the comics.

The Walking Dead will officially return on Aug. 22, as revealed via the Season 11 trailer (but AMC+ subscribers can watch a week earlier). Even though the end is near, AMC said the final episodes would “run through late 2022,” so if you’re not ready to say goodbye yet, you don’t have to.

This post will be updated with additional cast and plot details as more information on The Walking Dead Season 11 becomes available.

More like this
Netflix Shut Down 'Bridgerton' S3 Rumours About A “Very Dark” Storyline
By Bustle
Everything To Know About 'RHONY' Season 14
By Jake Viswanath, Alyssa Lapid and Brad Witter
'Happy Valley' Recreated This Moment From S1 In Its Penultimate Episode
By Sophie McEvoy
This Dark 'Happy Valley' Theory Is Staring You Right In The Face
By Sophie McEvoy
Get Even More From Bustle — Sign Up For The Newsletter
From hair trends to relationship advice, our daily newsletter has everything you need to sound like a person who’s on TikTok, even if you aren’t.

This article was originally published on April 5, 2021