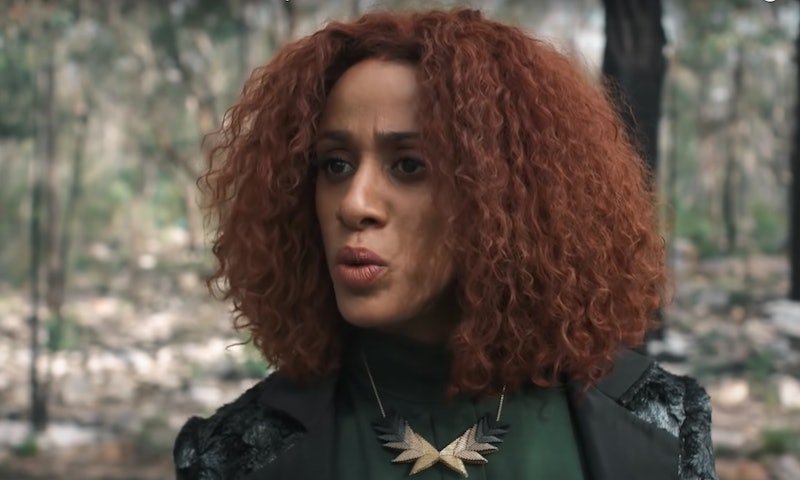 Terry Pratchett's Discworld fantasy novels are as expansive as they are beloved, and BBC's new dramedy The Watch adapts just one corner of his universe. The series follows the Ankh-Morpork’s City Watch, a ragtag — and pretty inept — group of law enforcement agents. The group was first introduced in the 1989 novel Guards! Guards!, the eighth out of 41 Discworld books. They went on to feature in seven other fantasy novels, which often revolved around Watch Commander Sam Vimes (played by Richard Dormer in The Watch) solving various crimes and murder mysteries.

It appears that the series will mix details from all eight novels, but based on the trailer, it will likely follow the plot of Guards! Guards! for Season 1. In the book, the Watch ends up being tasked with stopping a summoned dragon, which crowned itself the leader of Ankh-Morpork. Eventually, the Watch's own underdeveloped dragon, Errol, defeats the creature. (In keeping with the story's comedic tone, Errol later lets the dragon go because it was a female dragon, and their battle was actually a mating dance.) The agents then attempt to arrest the Supreme Grand Master who summoned the dragon, but they accidentally kill him when they throw the Laws and Ordinances of Ankh-Morpork book at him, causing him to fall to his death. As a reward for saving the city, the Watch asks only for a modest pay raise: a new teakettle and a dartboard.

Based on the trailer, The Watch will feature Vimes and his crew, along with the dragon terrorizing the city. As a whole, though, the series may end up being very different from Pratchett's work. According to Pratchett's daughter Rhianna, The Watch and Guards! Guards! share little in common. "Look, I think it's fairly obvious that @TheWatch shares no DNA with my father's Watch. This is neither criticism nor support. It is what it is," she tweeted on Oct. 9. "@TheWatch will succeed or fail on its own merits," she added.

Following her statement, The Watch executive producer Simon Allen said he knew how difficult it would be to adapt a popular series like Discworld. "We were aware of how awfully precious these things are," he explained to Collider. "What we tried to do is to say that the show refers to the fact that this world exists in a multiverse. So The Watch, the TV show, is not a canon show. It exists in a backwater of the multiverse. It's kind of like JJ Abrams/Kelvin universe of Star Trek. You know, the books are absolutely fine. The books are still there. They will always be there for all time. And The Watch is related to them, of course, but it's absolutely its own thing as well."

Ultimately, he said he wants The Watch to stand on its own and that their goal is to "bring a new audience to these incredible books but also to make something that kind of works on its own terms."

More like this
The First 'Percy Jackson & The Olympians' Teaser Comes With An Ominous Warning
By Grace Wehniainen
Nicola Coughlan Shared A Lady Whistledown Excerpt From ‘Bridgerton’ Season 3
By Grace Wehniainen, Alyssa Lapid and Sam Ramsden
Viserys’ Fate On 'House Of The Dragon' Could Differ From The Book In This Surprising Way
By Grace Wehniainen
The New 'National Treasure' Series Trailer Teases The Return Of A Popular Character
By Grace Wehniainen
Get Even More From Bustle — Sign Up For The Newsletter