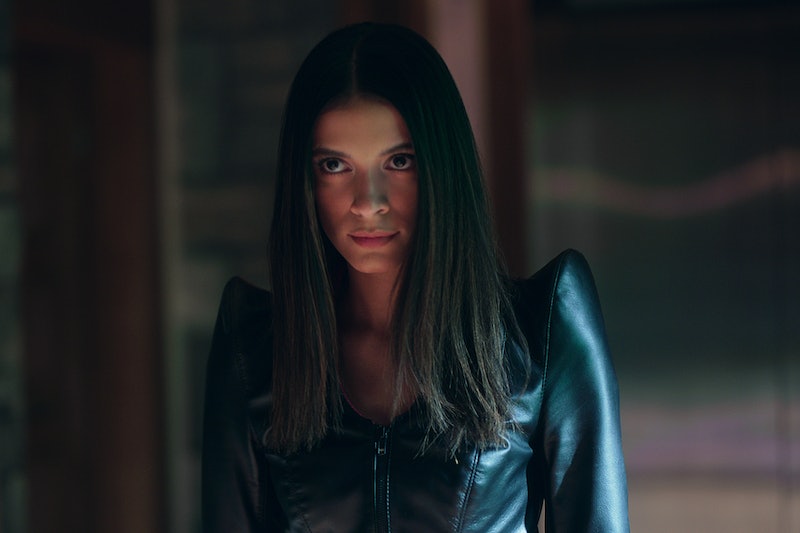 Netflix's Locke & Key is full of mysteries, but the biggest is undoubtedly the “Well Lady” (Laysla De Oliveira). In Season 1 of the Netflix fantasy series, she lures Bode (Jackson Robert Scott) to the well at Keyhouse by pretending to be a friendly spirit, informing him that the estate is full of magical keys that can “whisper” to the right person.

This puts Bode on a path of discovery, and eventually he finds the Anywhere Key and the Mirror Key. But when he returns to inform Well Lady of his discovery, she tricks him into releasing her. It’s only after she’s out of the well that Bode realizes with horror that she isn't a benevolent ghost watching the grounds, but rather a villain that's been trapped there. Well Lady uses the Anywhere Key to escape, and so begins a game of cat-and-mouse in which the Locke kids try — ultimately in vain — to stop her from getting more keys for her goal of world domination.

This back-and-forth continues into Locke & Key Season 2, when Well Lady reveals that she can transform into any gender using the Identity Key — often taking the form of Gabe (Griffin Gluck), Kinsey’s (Emilia Jones) love interest. We learn later that the demon is named Dodge, but even that is a misnomer from when Rendell Locke and his friends were kids. "Dodge" was a nickname that Ellie (Sherri Saum) gave to her boyfriend Lucas (Felix Mallard) because he was good at dodging in hockey. It’s technically Lucas who uses the Head Key to transform himself into Dodge and Gabe to continuously trick the Locke kids — and all their allies — throughout the show.

On top of that, even Lucas isn't really Lucas (whew, this show is a mental maze). The real Lucas died years ago, when Rendell and his friends opened the Black Door. Lucas was possessed by a ball of light that came from the other side of the door, and he ended up killing two of his friends. Rendell was forced to kill Lucas, but years later, a still-heartbroken Ellie uses her Echo Key to try to bring back an Echo of Lucas — a memory that takes on human form. Echoes on their own aren’t dangerous, but they can easily be possessed by a demon. Ellie realizes too late that when she calls up Lucas’ Echo, the creature that possessed him when he died, Dodge, also returns with him.

As for who the demon Dodge really is, their true name is unknown. But in the comics, Dodge tends to refer to themselves as "The Legion." It's revealed in the Locke & Key: Clockworks comics that the Black Door is a gateway to another world, where demons called Children of Leng reside. Children of Leng require a human host to survive once they cross the threshold, or else they drop dead and become Whispering Iron — the material used to make Keyhouse’s magical keys, which indeed "whisper" to the right people.

Using both the Gabe and Dodge disguises, the demon was a formidable opponent for the Locke family. But by the end of Season 2, it appears that Dodge has finally been defeated. In the final moments of the season, the Locke siblings storm Dodge’s cliffside hideout and use the newly made Demon Key to turn a hoard of demons on Dodge. Tyler (Connor Jessup) then uses the newly made Alpha Key — which was made to “unlock” a demon from a person’s soul — to separate Dodge from Lucas. This appears to kill Dodge, as a teenage Lucas reappears and gives all of Dodge’s various keys back to the Lockes. Lucas explains that he had no control over Dodge’s actions while the demon was in his body. Dodge’s villa, meanwhile, crumbles into the sea.

This suggests that the Dodge chapter is officially closed, but the show also avoided confirming if that was for sure the case. Demons can’t survive without a host, but the final moments of the season left several potential plot threads hanging that could lead to Dodge returning. Ellie returned from behind the Black Door, and we don’t yet know how being in the demon dimension changed her. Could she possibly be possessed, or compelled to work with a demon? The hinges on the Black Door itself also appear to be broken, meaning there’s potentially an active portal open now. And most ominously, at the end of Episode 10, a possessed Eden (Hallea Jones) summoned an Echo of Captain Gideon. Gideon was a 1775 British soldier who first opened the portal, and he allowed himself to be possessed by a very powerful demon before his death. It’s that same demon that returns in Gideon’s body, and if there’s any creature powerful enough to bring back Dodge, it’s likely him.