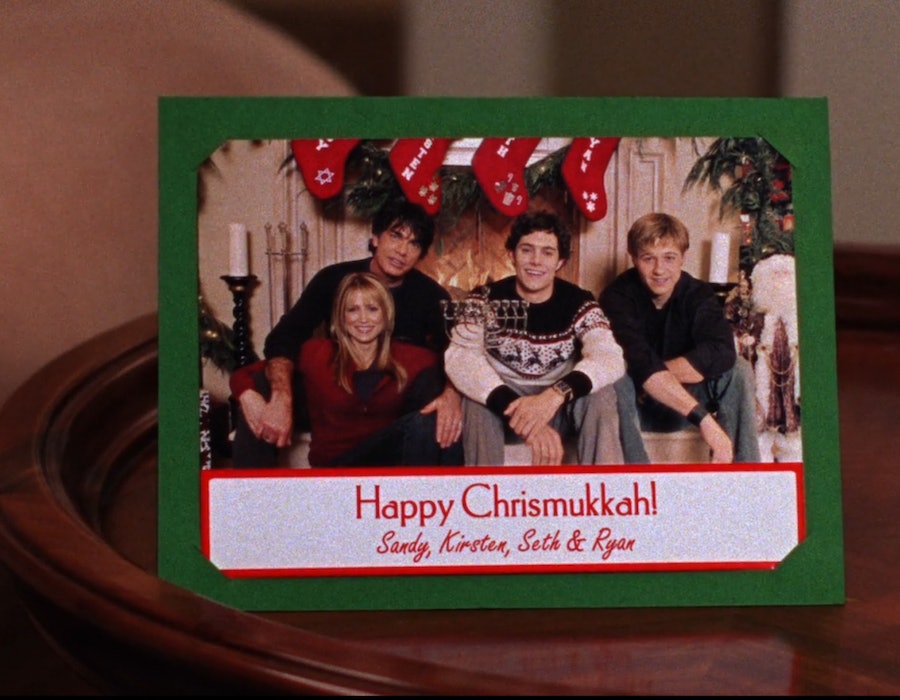 Nineteen years ago, The O.C. asked the question: menorah or candy cane? Seth Cohen’s answer of “Why not both?” not only prompted an iconic pop culture holiday tradition, but set the tone for the show’s first-ever Chrismukkah episode.

Nestled in the middle of The O.C.’s first season in 2003, “The Best Chrismukkah Ever” places the main characters at a crossroads. Seth (Adam Brody) must choose between his two crushes: the nerdy Anna (Samaire Armstrong) and the charming Summer (Rachel Bilson). Kirsten (Kelly Rowan) must decide whether to reveal her father’s unethical business practices to her husband Sandy (Peter Gallagher), and Ryan (Ben McKenzie) is debating whether to stay with Marissa (Mischa Barton) or walk away from her self-destructive tendencies. But despite these tough choices, Seth is determined to make this the best Chrismukkah ever by blending his father’s Jewish culture with his mother’s Christian upbringing to highlight the best of Christmas and Hanukkah.

Infused with family conflict, romance, and questionable choices, “The Best Chrismukkah Ever” remains a pivotal holiday episode in TV history nearly a decade later. In honor of the yuletide season, here are eight things I noticed revisiting The O.C.’s first Chrismukkah episode.

Death Cab for Cutie. Bright Eyes. The Shins. You can almost hear the jangly guitars as Seth describes all the albums he includes in his gifts to Summer and Anna. He’s decided to opt for practicality, giving both girls the same gift and calling it a “Seth Starter Pack.” These bands were so prominent in 2003 that it makes sense for Seth to be frantically sharing their music with every girl who looks his way.

Like any angsty teen, Marissa Cooper is not a fan of Christmas. Despite having spent most of her privileged life collecting little Chanel bags, this year has brought about her parents’ divorce and her overdose in Mexico. This episode makes you realize that Marissa Cooper is not a fun party girl but a sad, destructive teen turning to heavy drinking as a coping mechanism.

3. This Episode Isn’t All That Festive

Marissa continues her destructive spiral by shoplifting during a shopping trip to the mall with Ryan. Even against the backdrop of the South Coast Plaza — Orange County’s real luxury mall with a comically large Christmas tree and crowds of designer-purse-clutching moms — it goes to show this episode isn’t very festive. It actually spends the majority of time not only chronicling Marissa’s troubles but escalating them to a point that they eventually lead her to meet one of The O.C.’s worst villains, Oliver, at the end of this episode.

4. Anna’s Holiday Look Is Worth Obsessing Over

It has not been fun inside the Seth-Anna-Summer love triangle. Both girls are vying for his attention and getting their feelings hurt repeatedly. Then Anna shows up to the holiday party wearing a red and black lace number, complete with a fur shrug that all the Y2K girlies are dying to get their hands on right now. There’s also one very special detail we should all try out this holiday season: the little strands of tinsel in her hair. So festive! So fun! Naturally, you can see them shimmer as she flirts aggressively with Mr. Seth Cohen.

When Summer walks into the Cohen house with huge Priscilla Presley-esque hair and blue eyeshadow, the look feels off-brand for her — she usually opts for flat-ironed hair and low-rise jeans. Later, we realize it was part of her Christmas gift to Seth — an authentic-looking Wonder Woman costume that she hid under her holiday dress. She gets Seth alone and unveils her hot little outfit, blowing his nerd mind to bits. My main question, though, is how on earth did she conceal a full-on lasso underneath her holiday dress?

Real estate moguls of the early ‘00s teen shows really had a distinct look to them. Their hair is white and shaved down, their demeanor is cold and unfeeling, and their voices deep and distinct. It was upon rewatching that I realized that Caleb (Alan Dale) reminds me of another fictional real estate mogul: Bart Bass (Robert John Burke). The resemblance between Caleb Nichol and Bart Bass is uncanny, but it’s not the only thing the shows have in common: The O.C. and Gossip Girl were created by producer Josh Schwartz.

After throwing themselves at Seth, Anna and Summer give him an ultimatum: he has to choose one of them. Fans were surprised when Seth ends up telling both of them that he only wants to be friends after stringing them along for several episodes. It’s the first of many questionable decisions that Seth makes, leading up to the Season 1 finale when he turns down Summer again to go off sailing on his yacht.

In 2003, therapy was not part of the cultural conversation in the same way it is now. When Marissa’s parents suggest she get therapy after her overdose, she is horrified. When she is caught shoplifting, she pleads with them not to make her go and gets upset with Ryan for even suggesting she might get something out of talking with someone. When pressed, she insists that she is the only “normal” one in the family. However, the real nugget of wisdom comes from Sandy. When Ryan wants to go with Marissa, he reminds Ryan that he doesn’t have to be the parent anymore. “Marissa is going to have to figure this out by herself, and you gotta let her,” he says.

The holidays have a way of bringing out the best and worst in people, and not many shows know that better than The O.C. In its three subsequent seasons, the series continued its holiday episode tradition, but they don’t quite beat this first Chrismukkah episode, which helped set a new standard for teen melodrama.

More like this
The 8 Best Aidan Shaw Moments On 'Sex And The City'
By Grace Wehniainen
Here’s What Happens To Bill & Frank In 'The Last Of Us' Video Game
By Brad Witter
The 'Gossip Girl' Reboot Creator Is “Looking For A New Home” To Air A Potential Season 3
By Brad Witter
'The Last Of Us' Video Game Revealed Tess’ Fate In The HBO Series
By Brad Witter
Get Even More From Bustle — Sign Up For The Newsletter
From hair trends to relationship advice, our daily newsletter has everything you need to sound like a person who’s on TikTok, even if you aren’t.