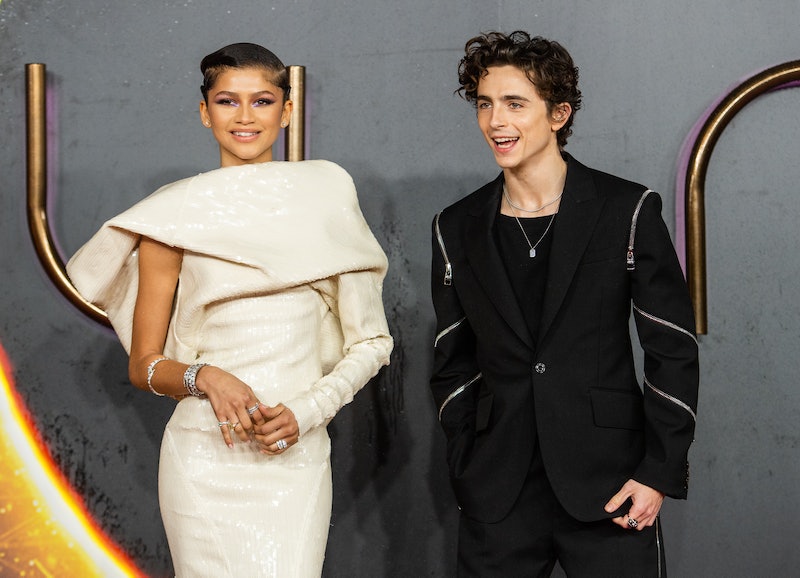 Timothée Chalamet and Zendaya’s highly anticipated science fiction film Dune comes out on Friday, Oct. 22, and the duo has basically been inseparable ahead of its release. On Wednesday, Oct. 20, for example, the actors took Buzzfeed’s BFF Test to see just how well they know each other. Turns out, they’re pretty well-versed in everything from each other’s birthdays, middle names, favorite snacks, and yes, celebrity crushes.

After correctly revealing basic details about each other in record time, Chalamet didn’t hesitate to say who in the industry his co-star has a giant crush on. “Easy,” he said. “Tom Holland.” In response, the Euphoria star let out a chuckle and quickly pivoted to trying to guess Chalamet’s celebrity crush. “Aw, man. I don’t actually know,” she admitted. “Maybe that’s a secret… on purpose.”

Zendaya has never confirmed her relationship with Holland, but the two have been the subject of romance rumors ever since filming Spider-Man: Homecoming in 2016. In the past, the pair has denied the dating speculation, but in July 2021, a photo of them kissing in a car surfaced online, which all but confirmed that they were an official couple.

Weeks after their smooch, Us Weekly reported that they “both challenge each other and balance each other out.” In September, the Uncharted actor posted a photo in honor of Zendaya’s birthday. “My MJ,” he wrote, referencing her role in the Spider-Man movies. Holland even showed support for Zendaya’s new movie earlier this month by sharing a photo of her at the premiere on Instagram. “Dune,” he wrote alongside a heart-eye emoji.

While it’s unclear just how much of their relationship fans will get to see moving forward, what is clear is that Chalamet may know more about Zendaya than Holland does. Elsewhere in the BFF Test, the Little Women actor correctly guessed which of his projects is her favorite. “This sounds like an awful answer but in a previous interview she said the entire body of work,” he said. As for Zendaya, she got it right when she said that his favorite project of hers was Euphoria.

The Dune co-stars’ winning streak continued when they correctly guessed each other’s favorite swear words, and although Zendaya didn’t guess Chalamet’s go-to Karaoke song (“Heart-Shaped Box” by Nirvana), she wasn’t too bothered by it. “We know each other well enough,” she said. “We have many more years, hopefully, if we do more of these movies to really get to know each other.”

More like this
Adam Driver & Joanne Tucker’s Relationship Timeline Starts With Cheese
By Jordyn Tilchen
Mollie King & Stuart Broad Just Shared The First Pic Of Their Baby
By Sophie McEvoy
Is Queen Elizabeth II Or The Royal Family In Netflix’s 'Harry & Meghan' Docuseries?
By Jake Viswanath
Harry & Meghan React To The Racist "Straight Outta Compton" Headline
By Jake Viswanath
Get Even More From Bustle — Sign Up For The Newsletter