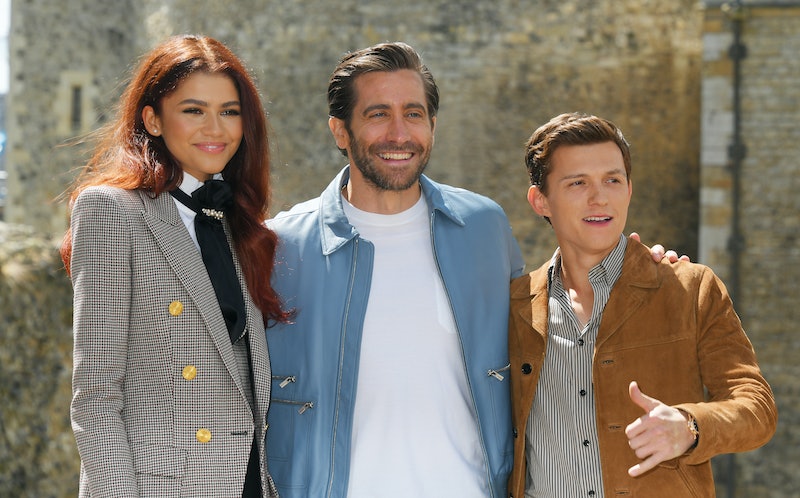 Ever since fans caught Zendaya and Tom Holland’s onscreen chemistry as co-stars in 2017’s Spider-Man: Homecoming, they’ve been hoping that the duo’s energy might be offscreen as well. Alas, the pair has adamantly denied (and still hasn’t verbally confirmed) being in a relationship after years of speculation. But in July 2021, a photo of them kissing in a car surfaced, seemingly confirming what everyone was hoping to be true: Zendaya and Holland were officially together. And in September 2021, Holland appeared to make things Instagram official by posting a Spider-Man set photo of them for Zendaya’s birthday and calling her “My MJ” after her character in the film series.

Although they’ve kept their friendship front and center, dodging questions about romance rumors with superhero-like ease, they don’t mind talking about their connection. In a recent interview with E! News, while discussing their upcoming film Spider-Man: No Way Home, Zendaya talked about working with Holland: “It’s pretty special to have grown up all together.” Both stars have known each other since they were just 19, so it should come as no surprise that they feel closer than just friends. A source told Us Weekly that Zendaya has been helping Holland “through the world of celebrity” because, unlike Holland, she’s been in the limelight for more than a decade, since she starred in Disney’s Shake It Up from 2010 to 2013.

However, most of the rumors about their relationship have been generated by how well they get along during press tours, sharing jokes and even making fun of each other on social media. Plus, how can we forget the adorable time Holland revealed that Zendaya was his first celebrity crush?

Here’s a rundown of everything we know about Zendaya and Holland’s friendship and relationship.

Back when Zendaya and Holland were freshly cast in Spider-Man: Homecoming, fan speculation over their relationship was pretty low, but they did start showing up on each other’s Instagram feeds. That July, Holland posted a photo of him and Zendaya in a pool, captioning the photo, “Summer Sundays.”

Later that same year in November, Zendaya posted The Hollywood Reporter cover featuring her and Holland with the caption, “Amidst all the chaos and sadness...this one good thing did happen to me today,” before giving Holland a shoutout by adding, “Honored to share it with the very best...Spider-Man himself @tomholland2013.”

On July 7, 2017, Holland got candid about his relationship with Zendaya in an interview with People, telling the magazine that the star had helped him handle the spotlight. “We are like the best of friends. She’s so great and amazing,” he shared at the time. “I’m a little worried [about dealing with fame … but] Zendaya is super famous and she’s been through this, and I just call her up and say, ‘How do I manage being famous?’ I’m very glad I have a friend like her.”

That same month, a source told People that they were more than just friends. “They started seeing each other while they were filming Spider-Man,” the source said. “They’ve been super careful to keep it private and out of the public eye, but they’ve gone on vacations with each other and try and spend as much time as possible with one another.” The insider continued, “They’re both really ambitious and they challenge each other — but, most importantly, they make each other crack up. They seem to have a really similar sense of humor and love joking around together. They have great banter back and forth.”

Fans were thrilled about the news, that is until Zendaya and Holland took to Twitter to put the rumors to rest. “Wait wait...my favorite is when it says we go on vacations together HA!” Zendaya tweeted. “I haven’t been on a vacation in years! hbu @TomHolland1996 ???”

Holland quote-tweeted her tweet, asking, “Does the press tour count?”

And never forget how in July that year, they battled against each other on Lip Sync Battle, with Holland transforming from Gene Kelly to Rihanna to lip sync “Singing in the Rain” and “Umbrella,” while Zendaya shining with her lip sync of Bruno Mars’ “24k Magic.” Their reactions to each other’s performances showcased their close friendship and potential relationship.

In August of that same year, Zendaya spoke to Variety about Holland, doubling down when it came to denying relationship rumors. “We are friends,” she said. “He’s a great dude. He’s literally one of my best friends. This past how many months we’ve had to do press tours together. There’s very few people that will understand what that’s like at 20 years old.”

But, despite all that denying, the rumor mill was at it again that December, after Holland was spotted hanging out with Zendaya’s parents in New York, and a source told Page Six that her mom and dad seemed “charmed” by Holland.

In 2018, things got pretty quiet when it came to news of their relationship; however, fans thought that Holland’s very boyfriend-like behavior was a little suspect. That May, he posted a photo of Zendaya to his Instagram, sharing how in awe he was of her Met Gala look — and her, of course. He captioned the post, “All hail the queen,” before adding a strategic, “Killing it mate 🙌🏻.”

Things took an interesting turn in the Zendaya and Holland saga when rumors started to surface that Zendaya was dating her Euphoria co-star Jacob Elordi. They were spotted in Greece together in August 2019, and paparazzi even caught them sharing a kiss in New York City that following February. However, they never confirmed that they were actually dating. And Holland also appeared to be unofficially seeing someone else as well, seemingly confirming his relationship with Nadia Parkes in July 2020 with a photo he posted on Instagram with the caption “the sky” and a red heart emoji.

In July 2021 the internet nearly broke when photos of Zendaya and Holland kissing in Los Angeles started making the rounds online. Later, the actors were also spotted hanging out with Zendaya’s mom. Fans on Twitter were a little more than thrilled over the news.

A few weeks later, a source told Us Weekly, that Zendaya and Holland “both challenge each other and balance each other out.” They also confirmed what fans seemed to see in the couple’s social media banter, that they’re “keeping it light” and “he makes her laugh.” Fueling the rumors even further, Zendaya and Holland attended a friend’s wedding together in the Euphoria star’s hometown of Oakland, as seen in footage posted by fan accounts.

READ NEXT: Photos Of Tom Holland With His Dog

This article was originally published on Aug. 13, 2021