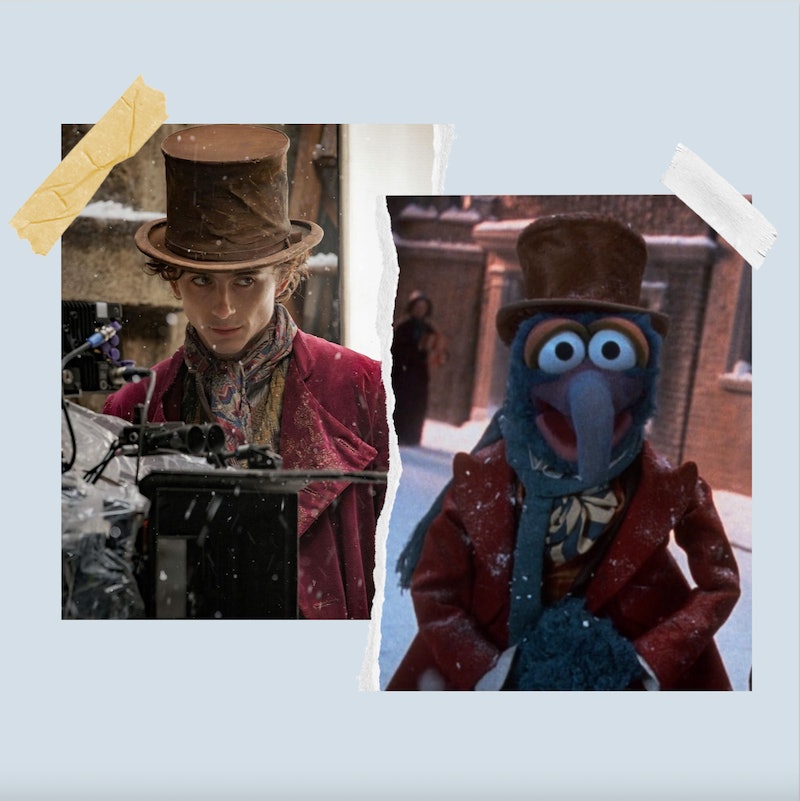 Timothée Chalamet fans have a lot to look forward to these days. Not only is the actor’s sci-fi adventure film Dune finally hitting HBO Max on Oct. 22, but he also gave fans a first look at his interpretation of Willy Wonka on Oct. 10. Chalamet will take on the iconic role for 2023’s Wonka, which will tell the story of a young Willy Wonka before the creation of his chocolate factory.

“The suspense is terrible, I hope it will last,” the 25-year-old Call Me By Your Name star wrote on Instagram alongside a photo of him dressed as the whimsical chocolatier. Upon seeing the picture, Chalamet’s fans quickly noticed that his red velvet coat, multicolored scarf, and brown top hat looked almost identical to the Great Gonzo’s outfit from the 1992 film The Muppet Christmas Carol, as you can see for yourself in an old Instagram post from The Muppets account below.

Chatting with Entertainment Weekly on Oct. 19, Gonzo said he’s “flattered” by the comparisons to Chalamet: “The similar look isn’t a coincidence. We both go to the same tailor — The House of Maurice of Bayonne.” He also expressed his interest in becoming Chalamet’s stunt double for the film, “especially if it involves being dipped in chocolate or flattened by a steam roller.”

When asked if he’d ever star as Wonka in the future, Gonzo quickly dismissed the idea. “No, I think Timothée has it down,” he said. “However, if they ever make a movie about Willy's brother, Wilbur Wonka, who runs a Tapioca Factory, count me in!”

More online commenters were quick to point out this isn’t the first time Chalamet has drawn fashion comparisons from The Muppets, referencing his Little Women character Laurie and his resemblance to Kermit the Frog.

But Chalamet’s fans aren’t the only ones who are stoked about the upcoming film. Several celebrities slid into the comments of the Little Women star’s post to let him know that they’re here for his interpretation of the beloved character. “OH MY GOD,” Chilling Adventures of Sabrina star Kiernan Shipka wrote. “All about this,” Rebel Wilson added. Even Zendaya, who will star alongside Chalamet in Dune, wrote that she “absolutely” approves.

Chalamet is expected to sing and dance onscreen for the first time in the upcoming prequel, according to Deadline. So far, much of the plot remains a mystery, so we’ll have to use our “pure imagination.” However, what we do know is that the actor is the third person to ever take on the role of Willy Wonka. In the 1971 adaptation of Roald Dahl’s classic novel, Wonka was played by Gene Wilder. The film was eventually remade in 2005 and starred Johnny Depp.

Although it’s been more than 15 years since Depp portrayed the eccentric chocolate factory owner, the debate about who played the role better rages on. Soon, there will be another Wonka in the mix, but not until the film hits theaters on March 17, 2023. Per Deadline, Paul King is directing the prequel from the screenplay he wrote with Simon Farnaby and several others. David Heyman and Luke Kelly are producing the project, and Michael Siegel and Alexandra Derbyshire are serving as the film’s executive producers.

More like this
The 'Love, Lizzo' Harry Styles Scene Is Just 1 Moment That Made Fans Feel Seen
By Brad Witter
Blake Lively's Reaction To Ryan Reynolds' Dance Video Was Pure Thirst
By Stephanie Topacio Long
Michelle Williams Laughs Often About Motherhood Thanks To 'The Fabelmans'
By Marina Watts
Then Vs. Now Photos Of The 'Enchanted' Cast In 2007 & The Sequel's Stars In 2022
By Marina Watts
Get Even More From Bustle — Sign Up For The Newsletter

This article was originally published on Oct. 11, 2021