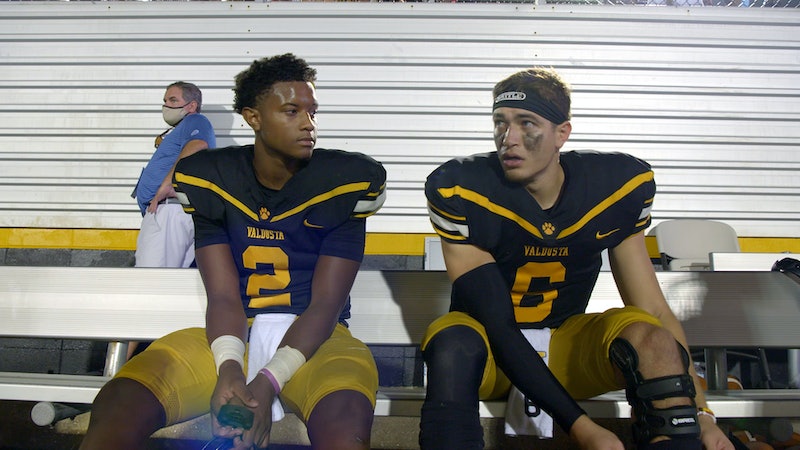 If your Netflix watchlist includes Friday Night Lights, add Titletown High to your queue, stat. The streaming platform’s new reality series follows the lives of some of the best student-athletes in the country as they compete for football glory, all while navigating school drama, secret dalliances, and coach-related controversy.

Over eight episodes, viewers witness the intimate struggles of high schoolers in the football-success incubator that is Valdosta, Georgia. Nicknamed TitleTown, the small town is famed for its many titles won, including six national, 24 state, and 42 regional championships. Created by Jason Sciavicco (Two-A-Days), the series follows the Wildcats during the 2020 season.

One of the star athletes on the show is quarterback Amari Jones, the junior transplant from Atlanta with hopes of bagging the starting position and a 4.0 GPA. Of course, every show needs some conflict, and Jones’ comes when his starting role is threatened after Jake Garcia’s arrival and involves a secret romance with one of Valdosta’s cheerleaders. Here’s everything to know about Amari Jones, if he stays at Titletown High, and his current relationship status.

What Is Amari Jones Doing After Titletown High?

In the series, the road to Jones’ starting quarterback dreams gets bumpy when he loses the starting spot to Garcia. Jones later reclaims it after Garcia is deemed ineligible to play after just one match. “I am going to fight for the job. It’s time to go compete,” he says in the trailer.

However, his football prospects hit a snag soon after. After the series wrapped, the infamous head coach Rush Propst found himself in the middle of another scandal (his controversial career has been plagued by them). According to ESPN, Propst’s contract wasn’t renewed after a recording of him allegedly asking for “funny money” pay for the athletes’ rent surfaced. Though the players denied their involvement, a handful of Wildcats, including Tahj Sanders, Jamad Willis, Ty’Li Lewis, and Jones, were banned from playing for a year.

Since Jones’ goal had always been to catch the eye of college recruiters, he decided to transfer to a state where he could play his senior year: Florida. According to his Instagram, Jones now plays for the Tornadoes at Bradford High School. He also already acquired offers from several universities, from Yale to Dartmouth, with a compilation featured on his Instagram Story Highlights, so all seems well on the college front.

Are Amari and Morgan of Titletown High Still Together?

During the series, Jones’ secret relationship with cheerleader Morgan Miller causes complications for him. His mom is vehemently against him having a girlfriend, calling one “a distraction.” And throughout the season, text arguments between the couple over issues like spending quality time together cause Jones to make mistakes on the field. “I’m hiding Morgan from my mom, which I don’t think is lying. I think it’s just not exposing the truth,” he says in an interview. His coach is also against Jones having a girlfriend and can be seen warning Jones in the trailer, “You cannot be my quarterback, and continue down this path.”

While Jones and Miller rekindle their romance by the end of Season 1, Jones eventually moved to a different state following the post-filming Coach Propst fallout. On Tuesday, Aug. 31, Miller answered a question via her Instagram Stories. When a follower asked, “Are you and him able to talk now, and did you get back together?” she responded with a “Yes” to the first question and a string of wide-eyed emojis to the second. Since the two don’t follow each other on Instagram, it’s not likely that the former lovebirds maintained a long-distance romance.

More like this
Here's How To Apply For 'Love Is Blind,' No Matter Where You Live In The US
By Grace Wehniainen
‘The Ultimatum: Queer Love’ Is Officially On The Way
By Radhika Menon and Kadin Burnett
Here’s When You Can Expect More ‘Indian Matchmaking’
By Brad Witter
Netflix's 'Bling Empire' Season 3 Trailer Includes A 'Selling Sunset' Cameo
By Kadin Burnett and Sam Ramsden
Get Even More From Bustle — Sign Up For The Newsletter