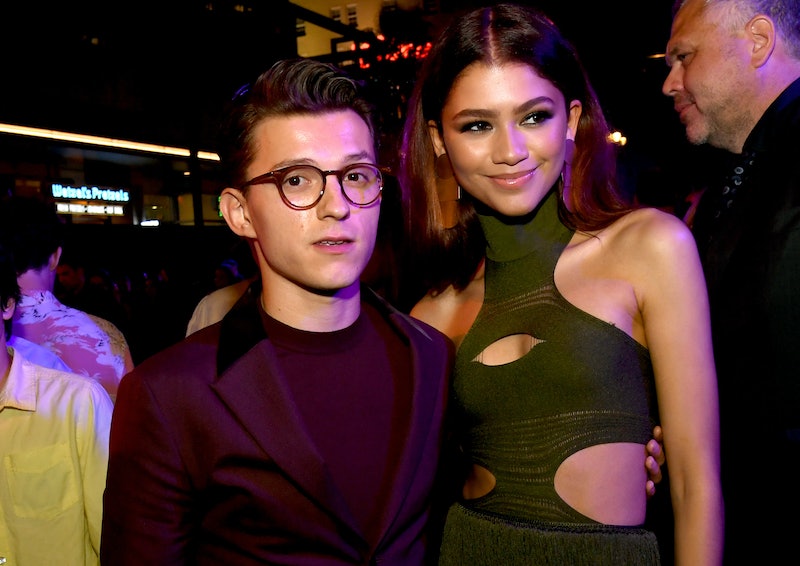 After Zendaya’s show-stopping appearance in her “wet” custom Balmain leather dress at the Venice International Film Festival last week, the Dune star got around to sharing some red carpet photos via Instagram on Friday, Sept. 10. “I know I’m late to posting these, it’s been a long week but one of the most special weeks,” she captioned her trio of poses in the Olivier Rousteing-designed Balmain creation, which she accessorized with a 93-carat Bulgari emerald necklace. Even a week later, the gown still dropped jaws, racking up almost 9 million likes within 24 hours, and, yes, Zendaya’s rumored boyfriend, Tom Holland, was among the tens of thousands who flooded the comments section with praise.

Like fellow actors Ryan Destiny, Aja Naomi King, Yvette Nicole Brown, and Halle Bailey, Holland flirtatiously commented with fire emojis (three, to be exact), as the photos’ heat seemed to render him speechless. Others, like Lori Harvey, astutely joked, “You actually don’t play fair,” in a sea of comments from other such Hollywood stars as Issa Rae, Cassie, Euphoria castmate Barbie Ferreira, Tina Lawson, Mario, and Romeo Miller. Meanwhile, Dune co-star Josh Brolin teased that she “stole” the gown from him, adding, “I had to dress in a f*cking suit! Anyway, at least you look good in it.”

Filmmaker Ava DuVernay, on the other hand, struck a more sincere tone, writing, “It’s not only the unbelievable gown, the stunning makeup, the stellar hair, the fantastic concept, the signature strut that makes this picture perfect. It’s your confidence in knowing: ‘I’m supposed to be here. This is my space. This is my time.’ Keep showin’ em. xo” DuVernay’s was the lone comment that Zendaya had acknowledged at the time of publishing. Replying to her fellow Emmy winner with a tearful emoji, she wrote, “thank you so much, appreciate you always.”

Despite having insisted for years that their relationship was platonic, the duo reignited dating rumors when they were spotted kissing in Holland’s car in July. “They’re both not one to make their relationship public,” a source told Us Weekly later that month. “They’re private when it comes to dating, so any photos that have come out would’ve just been them going about their business and not knowing photographers were around.” Another insider added to the magazine that Zendaya and Holland “challenge each other and balance each other out,” noting that they work well together “because he makes her laugh” and she “really helps guide him through the world of celebrity.”

Even though Holland didn’t walk the Venice International Film Festival red carpet with Zendaya, she’s still apparently very much on his mind.