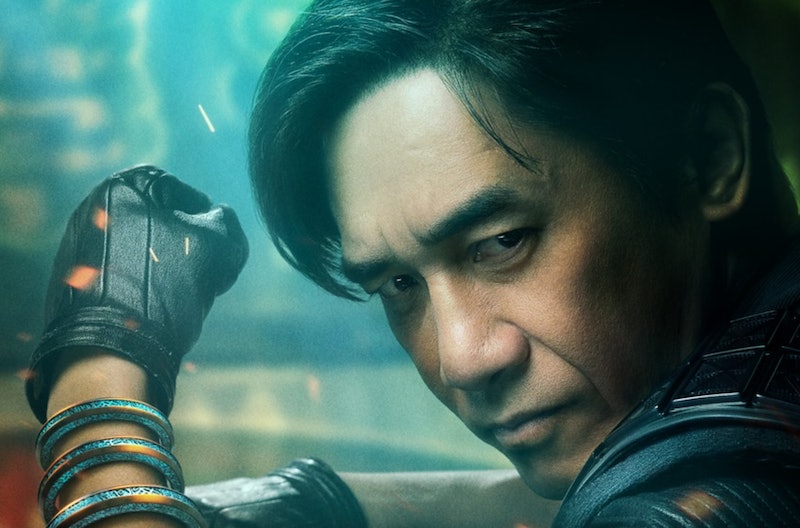 If you left Shang-Chi and the Legend of the Ten Rings particularly taken with the film’s moody, tragic villain (are we calling him that?) Wenwu, you’re not alone. TikTok and Twitter alike are flooded with fans of Tony Leung and his portrayal of the powerful Ten Rings boss, earnestly welcoming him into the fold of flawed father figures that have become a staple of the Marvel Cinematic Universe. Hello, Yondu, Odin, Hank Pym...

Leung’s style and dreamy stare haven’t just won over viewers, but his movie son as well. “He’s able to convey so much with a single look,” Simu Liu told GQ in August. “It’s one thing to see that captured on-screen; it’s another to have those eyes across from you, piercing through to the depths of your soul.” (Liu also described Leung as “Leonardo DiCaprio, Marlon Brando, Brad Pitt, George Clooney, all rolled up into one,” which, accurate.) Though Shang-Chi may be Leung’s first foray into Hollywood proper, he has a lengthy resume of roles from Hong Kong and beyond — great news for those craving more screen time with their new MCU fave. From romance to action, here are just a few Tony Leung movies to stream after Shang-Chi.

In The Mood For Love

In maybe one of the dreamiest romances ever committed to film, Leung and Maggie Cheung play a pair of star-crossed neighbors in a very tricky predicament: his wife is having an affair with her husband. The spurned spouses are too respectful of each other to start a scandal of their own, though, so they express their pent-up love for each other in gentler ways — soft brushes, soulful stares, and stretches of time spent soaking in each other’s presence. You can stream In the Mood for Love on HBO Max or The Criterion Channel.

Another project from filmmaker Wong Kar-wai (a frequent collaborator of Leung’s), Chungking Express tells two love stories, one of which focuses on Leung’s character, a cop who’s been unlucky in love until he sparks the interest of local cafe worker Faye (Faye Wong). Watching their connection grow from a very unconventional, hidden love into something more lasting is truly adorable. (Plus, if you loved Moonlight, you’ll be glad to know that both In The Mood for Love and Chungking Express inspired filmmaker Barry Jenkins, as he discussed in an interview with Criterion.) Stream now on The Criterion Channel.

OK, so the central couple of Happy Together seems to be anything but — Lai (Leung) and Ho (Leslie Cheung) are already falling apart when they travel to Argentina in the hopes of restarting their relationship. Spoiler alert: it doesn’t quite work. But the constant push and pull between the men leads to moments both heartfelt and heartbreaking. If you like modern relationship breakdown movies like Malcolm & Marie or Marriage Story, this is definitely one to watch. Catch Happy Together on The Criterion Channel.

Though Leung has played more than a career’s worth of brooding roles, his turn in The Great Magician proves that he has comedic chops to back up that iconic gaze. In this 2011 film, Leung is a talented magician who finds himself entangled in a personal and political plot in Houdini-era China. Eventually, though, he catches feelings for the very woman at the center of the scheme. You can stream The Great Magician now on Netflix.

Many of Shang-Chi’s most beautiful moments centered on those epic martial arts displays, from the iconic bus scene to the dance-esque fight between Leung’s Wenwu and Ying Li (Fala Chen). Fortunately, there’s way more where that came from. 2013’s Oscar-nominated The Grandmaster tells the true story of Ip Man, whose prowess in the art of Wing Chun made him a noted fighter in 20th-century China — he even went on to train the actor and martial artist Bruce Lee. You can watch it on Netflix now.