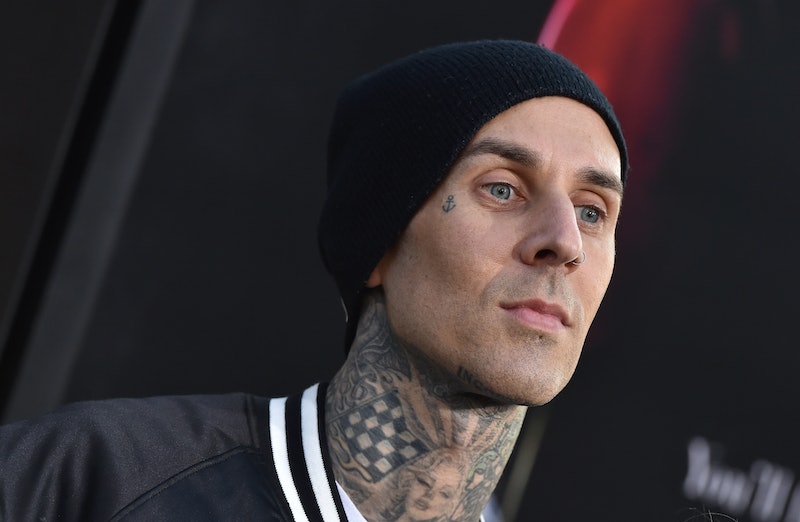 It’s been well over a decade since Travis Barker survived a deadly plane crash, and the Blink-182 star opened up about the near-fatal experience in a new interview with Men’s Health. The deadly accident happened in 2008 when Barker and his friend Adam “DJ AM” Goldstein were returning home from a show in South Carolina. During takeoff, the plane’s tires blew and the crash killed Barker’s assistant, his security guard, and the aircraft’s two pilots. The drummer and AM narrowly escaped with their lives. Barker suffered third-degree burns and struggled with PTSD and survivor’s guilt. Immediately after, he found it hard to even go outside.

“I was dark,” Barker told the magazine, adding that he was unable to sleep for several weeks following the accident. “I couldn’t walk down the street. If I saw a plane [in the sky], I was determined it was going to crash, and I just didn’t want to see it.” The drummer added that things were especially difficult in the aftermath because the experience was fresh in his mind. “The closer I was to it, it felt like I was closer to the bad stuff than I am to the good stuff,” he explained. “I felt closer to the experience of trying to escape, [to] being in an accident and being burned, trying to grab my friends from a burning plane.”

After explaining that the crash “haunted” him for a long time, Barker said that the natural passage of time helped heal a lot of his trauma. “It’s been so many years, it’s getting easier for me,” he continued. “There are days where I’ll wake up and never think about it.” However, he does often think about his late friend DJ AM, who died in 2009 of an accidental overdose. “It was just him and me,” Barker said, calling them “each other’s therapists.” “When he left, I was like, ‘Oh, f*ck. I’m the only one in my club. It’s just me.’ And I find my ways to deal with it.”

Giving up drugs was just one of the ways Barker coped with the deadly accident. “People are always like, ‘Did you go to rehab?’” he said. “And I [say], ‘No, I was in a plane crash.’ That was my rehab. Lose three of your friends and almost die? That was my wake-up call. If I wasn’t in a crash, I would have probably never quit.” He also hasn’t flown in a plane since. “If I do it, and the angels above help me in my travels and keep me safe, I would like to come back and [tell my children], ‘Hey, I just flew here, and then I flew home. And everything was fine.’ I have to tell them, because I almost left them,” he said. “That’s a perfect day.”

Though he declined to talk about his high-profile relationship with reality star Kourtney Kardashian, it’s safe to assume that she has been a positive force in his life over the last several months. The two have been showing off their relationship on social media since February when the Keeping Up With the Kardashians star confirmed they were dating with a hand-holding photo on Instagram. Now, the couple has moved on to sharing love notes on their Instagram Stories and NSFW images from their many vacations together. After a recent visit to Disneyland, for example, the drummer shared a photo of him holding Kardashian’s hand on the carousel and called her “the love of my life” in the comments.

People first reported that Barker was dating the Poosh founder on Jan. 24. “They’ve been dating for about a month or two,” an insider told the magazine, adding that “Travis has liked her for a while.” Entertainment Tonight echoed those sentiments, reporting that the pair had been friends for a while before deciding to take things to the next level. “They’ve been friends and family friends for a very long time, but recently something sparked and their relationship has turned romantic,” a source revealed. “Things are super easy between them because they know each other so well and just click and get one another. Her kids and his kids get along so well too, which is a major plus for both of them.”

Elsewhere in his Men’s Health interview, the rocker said that he’s surrounded in his daily life by the people he loves, including Kardashian and his two kids, 17-year-old Landon and 15-year-old Alabama. “I have all the love I need in my house,” he said. “It will never make sense why my friends are gone, or the pilots, but all I can do is carry on. I can’t regret anything. I’m 100 percent supposed to be here.”

More like this
How Andrea Riseborough Got Nominated — & Almost Disqualified For An Oscar
By Jake Viswanath
Beyoncé Just Announced Tour Dates: Here's How To Cuff Tickets To Her 2023 Shows
By Jake Viswanath
RHOP’s Robyn Dixon Explained Why Juan Paid For Another Woman's Hotel Room
By Brad Witter
Cardi B, Olivia Rodrigo & More Will Present At The 2023 Grammys
By Jake Viswanath
Get Even More From Bustle — Sign Up For The Newsletter
From hair trends to relationship advice, our daily newsletter has everything you need to sound like a person who’s on TikTok, even if you aren’t.