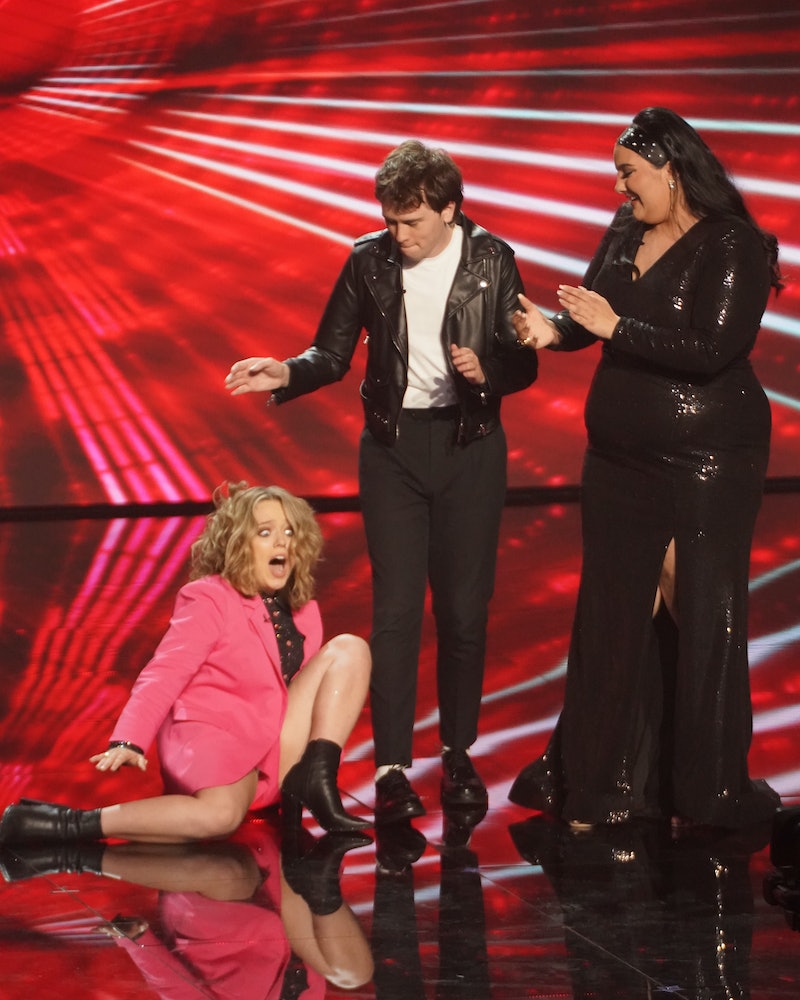 Before its historic Season 20 finale, American Idol paid tribute to one of its superstar winners of yesteryear. On the May 15 penultimate episode of the season, the Top 5 contestants sang their favorite hits by Season 4 winner Carrie Underwood, and even received some mentoring from the country-pop sensation. The aspiring musicians also got the chance to sing any song their heart desired to prove why viewers should vote them into the May 22 finale.

However, not even guidance from one of the most successful alums in the show’s history was enough for some contestants to make it to the Top 3. True to the night’s theme, even some of the contestants were “blown away” by the Top 3 results, which also shocked Twitter users after the eliminations were announced by Ryan Seacrest.

Before taking to the American Idol stage to battle for a spot in the finale, the Top 5 made a detour to Las Vegas to meet Underwood and see her Reflection residency show. The day after the show, the “Good Girl” singer heard each of the contestants’ takes on her songs and helped them make it their own, often reflecting on her own time on the show. HunterGirl sang Underwood’s hit “Undo It,” Nicolina took on “Blown Away,” one of her most theatrical songs, and Fritz Hager took a left turn by selecting “I Wanna Remember,” her deep cut duet with Needtobreathe.

But Underwood was most affected by Noah Thompson, who she bonded with over their small town backgrounds — even though they had to meet virtually due to his COVID-19 quarantine. “I do feel like this show was created for people like me and for people like Noah, who didn’t know how to dream that big but knew that they wanted to do something,” she said, getting choked up. “It’s a beautiful thing. I think back, that’s the decision that changed my entire life. I have no idea where I’d be, and to see contestants get every opportunity they’ve ever wanted is just magical.”

As most fans would, Leah Marlene used her time with Underwood to completely fangirl, revealing that half of the covers on her YouTube channel, which her mom started when she was just 8 years old, were songs by the Season 4 winner. “You were my childhood idol,” she said. Underwood was visibly touched by both this revelation and Marlene’s unexpected song choice, The Pretenders’ “I’ll Stand By You,” which Underwood covered on the “Idol Gives Back” special in 2008.

No one was more shocked about the Top 3 results than Leah Marlene, who literally dropped to her knees when Seacrest announced that she made it to the season finale. HunterGirl and Thompson joined Marlene in the Top 3, which clearly signals that America was feeling country this year.

This meant Hager and Nicolina didn’t make it to the finish line, and Twitter wasn’t all that pleased with their eliminations.

More like this
Tristan Thompson Plays Drake’s Best Man In A Music Video Wedding With 23 Brides
By Grace Wehniainen
Which RHODubai Housewife Has The Biggest Net Worth?
By Hugh McIntyre
Kim Kardashian Reveals The First Text She Sent To Pete Davidson
By Jake Viswanath
Pete Davidson Pops Up In This Hidden Scene From The Kardashians Season Finale
By Jake Viswanath
Get Even More From Bustle — Sign Up For The Newsletter