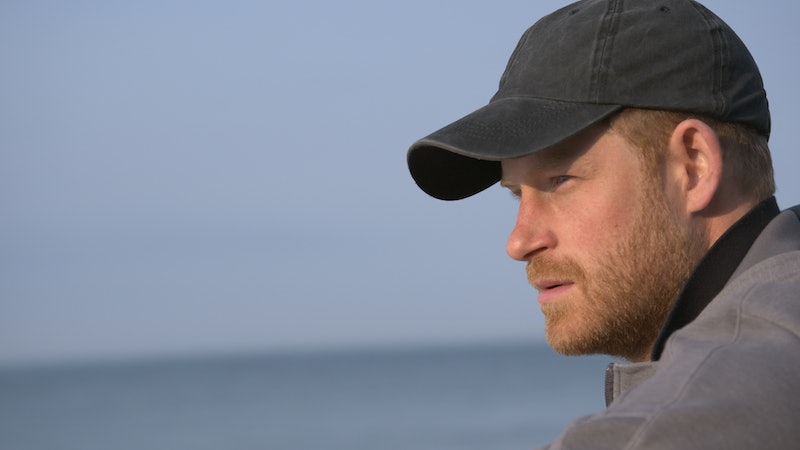 Following Prince Harry and Meghan Markle’s tell-all interview with Oprah Winfrey in March, the couple is getting even more candid. In his new AppleTV+ docuseries with Oprah, The Me You Can’t See, the Duke of Sussex guides open discussions about mental health with celebrities including Lady Gaga, Glenn Close, professional basketball player DeMar DeRozan, boxer Virginia “Ginny” Fuchs, and mental health advocate Zak Williams, the son of the late comic Robin Williams. In the process, Harry reflects on how the trauma of his mother Princess Diana’s death affected him as a child and into adulthood, resorting to alcohol misuse to cope, and what it was like to watch his wife experience suicidal thoughts while living in the UK and facing intense media scrutiny.

Needless to say, Twitter had a lot of emotional reactions to the show. “I'm going to be thinking about that Prince Harry interview clip all day because it's chilling. I'm proud of his strength and worried for his life and Meghan's as well. I also feel for him because that is a lot of pain to carry for decades,” tweeted writer Morgan Jerkins.

“Prince Harry sounds like he finally found the peace and family life he was always searching for with Meghan and in California,” wrote TvKhaleesi. “I am happy for him.”

Writer J.J. McAvoy had “never seen a better endorsement for therapy” than the new docuseries.

For grief advocate Tracy Poulos, the docuseries called for Kleenex and promised to be “emotionally exhausting as is therapy.” (Spoiler alert: It was, indeed, a tearjerker.)

Twitter user MagaliDMathias also celebrated the many voices included in the docuseries, including Spurs player DeMar DeRozan and Zak Williams, son of the late Robin Williams.

Another user, whendreamscome, wrote that “there are so many people in pain this project will help,” and they thanked everyone involved “for being so brave.”

Another major moment was Lady Gaga’s emotional reveal of experiencing a sexual assault and pregnancy at 19. “It will never be easy for her to talk about this but she’ll help so many by sharing her story,” wrote Laura Lyne. “This is why @ladygaga will always be my #1.”

Everydayrobsten was “touched” by old footage of young Harry and Princess Diana on the beach, which transitioned into Harry sitting on the shore today.

One user, JoDivaRunner, is already predicting awards attention for The Me You Can’t See.

The stories featured in the docuseries “were equal parts heartbreaking and uplifting” for royal_suitor.

Washington Post writer Karen Attiah was particularly stunned by one part of the docuseries, in which Harry compared Meghan with Diana. “My mother was chased to her death while she was in a relationship with someone that wasn't white,” Harry said in the clip. “And now look what’s happened. You wanna talk about history repeating itself? They aren't gonna stop until she dies. It's incredibly triggering to lose another woman in my life.”

Shadepodcast1 was also affected by the comparison, giving “props to Harry for his honesty.”

Twitter user duchessmeghn got emotional thinking about how Archie could have lost his mom, much like Harry lost his.

The Grio writer Stephanie Guerilus empathized with Harry’s confession that “fine was the easy answer” when asked how he was doing.

More like this
'The Crown' Season 6 Has Suspended Filming "Out Of Respect" For The Queen's Death
By Bustle Staff
A Royal Lie: Harry Reveals The Truth About Princess Diana’s Ring
By Marina Watts
Meghan & Harry Respond To Jeremy Clarkson’s "Apology" Over *That* Column
By Sophie McEvoy
Prince Harry Incorrectly Recites Christina Aguilera’s “Genie In A Bottle” Lyrics
By Jake Viswanath
Get Even More From Bustle — Sign Up For The Newsletter
From hair trends to relationship advice, our daily newsletter has everything you need to sound like a person who’s on TikTok, even if you aren’t.