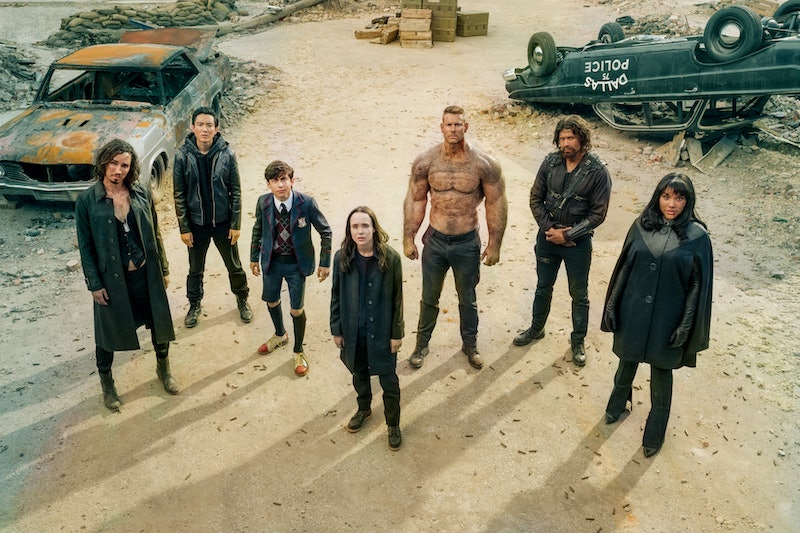 Spoilers ahead for The Umbrella Academy Season 2. Preventing the apocalypse is no easy feat — something Five and his siblings have now learned twice on The Umbrella Academy. Failing to stop Vanya from inadvertently blowing up the moon is what got them all trapped in 1960s Dallas in the first place. And in Season 2, they're once again saddled with blocking her from causing a nuclear doomsday. Thanks to Ben, they're more successful this time around, but it leads to a much different reality when they're finally transported back to 2019 in the Umbrella Academy Season 2 ending — namely, one in which both Ben and their dad are still alive.

Below, showrunner Steve Blackman breaks down what this and all of the other final twists mean for the Hargreeves' future.

Sir Hargreeves Is An Alien

Yes, Sir Reginald Hargreeves really is an alien from another planet. This is revealed in the comics within the first few pages, but in the show, it's not confirmed until late in Season 2 when he literally peels off his human face. "I wanted to establish a lot of relationships first before I say, 'Hey, your dad might be an alien,'" Blackman explains of why he held off on the reveal. "If we're lucky enough to get a Season 3, we would like to look more into who 'dad' really is and start to reveal to the kids that he is not who they think he is."

When the siblings teleport back to 2019, the mansion they return to is no longer home. Their suddenly alive father informs them that this is the Sparrow Academy, as several mysterious but clearly super-powered people stand above them.

This is a major lead-in for future seasons, so Blackman simply says it's "a good guess" that those silhouettes belong to the Sparrow Academy members who are revealed in the third volume of the Umbrella Academy comics, Hotel Oblivion. We know there were 36 other children born at the same time as Five and his siblings, so it's reasonable to assume Hargreeves found and raised some of them. What's unclear is why. Did he create the Sparrow Academy because of how disappointed he was when he met the Umbrella Academy in 1963?

Ben sacrifices himself to stop Vanya from causing yet another apocalypse. But when the siblings arrive at the Sparrow Academy, they see a photo of him on the mantle and are greeted by a scarred and snarky version of the sweet Ben they once knew. Though this Ben is very different, Blackman confirms that he is indeed the same kid the Hargreeves grew up with, which means this 2019 isn't some alternate world in a multiverse.

Blackman adds that they're excited to give actor Justin H. Min a different arc, and to have Ben interact with other characters beyond Klaus, aka "the world's worst translator." "This is an opportunity for the show and the actor to really expand his universe on screen," Blackman says.

Though Lila initially seems to simply be Diego's new love interest, it's later revealed that she was raised by The Handler after she killed Lila's parents. The finale explains why: Lila is one of the 43 children born on Oct. 1, 1989, and she has the ability to mirror back anyone's powers. She flees the battlefield in the end, but Blackman says he has "a really good idea" of where to take her story in future seasons.

"She really does love Diego and he really loves her, so I think we could expect to see them trying to find each other," he says. He also notes that Lila has a briefcase, so she can be "anywhere" at "any time." He sees Lila as more of a "contrarian" than a villain, so maybe that means she'll be on the Umbrella Academy's side next time we see her?

Is The Handler Really Dead?

She managed to fake her death at the end of Season 1, but Blackman confirms this is the end of the road for The Handler. "As much as I adore [The Handler actor] Kate Walsh, The Handler really did die this year," he says. RIP to all those fabulous outfits.

What Will Happen to Harlan?

Midway through the season, Harlan, the autistic son of Vanya's love interest Sissy, drowns in a lake. Shockingly, Vanya revives him by giving him some of her powers. This puts Harlan on The Handler's radar; though the Umbrella Academy successfully protects him and Vanya seemingly takes back the powers, the final moments of the season show Harlan floating toys in the air.

"Vanya wasn't as successful as she thought she was in removing his power," Blackman says. "A little bit was left behind." Does that mean Harlan will play a major role in a Season 3? "No comment," Blackman says.

What About Ray and Sissy?

Both Allison and Vanya formed romantic connections with people in the 1960s, but sadly, it sounds like that's the last we'll see of them. "If we did the math, Ray would be a very old man in 2019," Blackman says. "Same with Sissy. I think these are characters we met this year, and next season, we'll meet new people."

One of the most exciting aspects of Season 2 is seeing how each of the Umbrella Academy siblings learn to wield their powers in new ways. Ben can take over Klaus' body; Diego can bend oncoming bullets; and Vanya can literally revive a human. "All their powers are evolving now," Blackman says. "They never finished their training with [their] dad. They left when when they were adolescents and went their own way." What they're beginning to discover is that "their powers are stronger when they're actually together as a team," Blackman says.

The showrunner declines to say much more about what might be ahead, but does say the season is full of Easter eggs that reference the comics. So with enough rewatches, you might be able to piece together where the story is going next.

More like this
There's At Least 1 Major Difference Between The 'Vampire Academy' Book & TV Series
By Grace Wehniainen
Here’s When 'Love Is Blind: After The Altar' Was Filmed, Because It’s Hard To Keep Track
By Grace Wehniainen
Mike Flanagan Teases 'The Midnight Club' In This Exclusive, Creepy Clip
By Grace Wehniainen
Caleb McLaughlin Details Racism From 'Stranger Things' Fans
By Radhika Menon
Get Even More From Bustle — Sign Up For The Newsletter