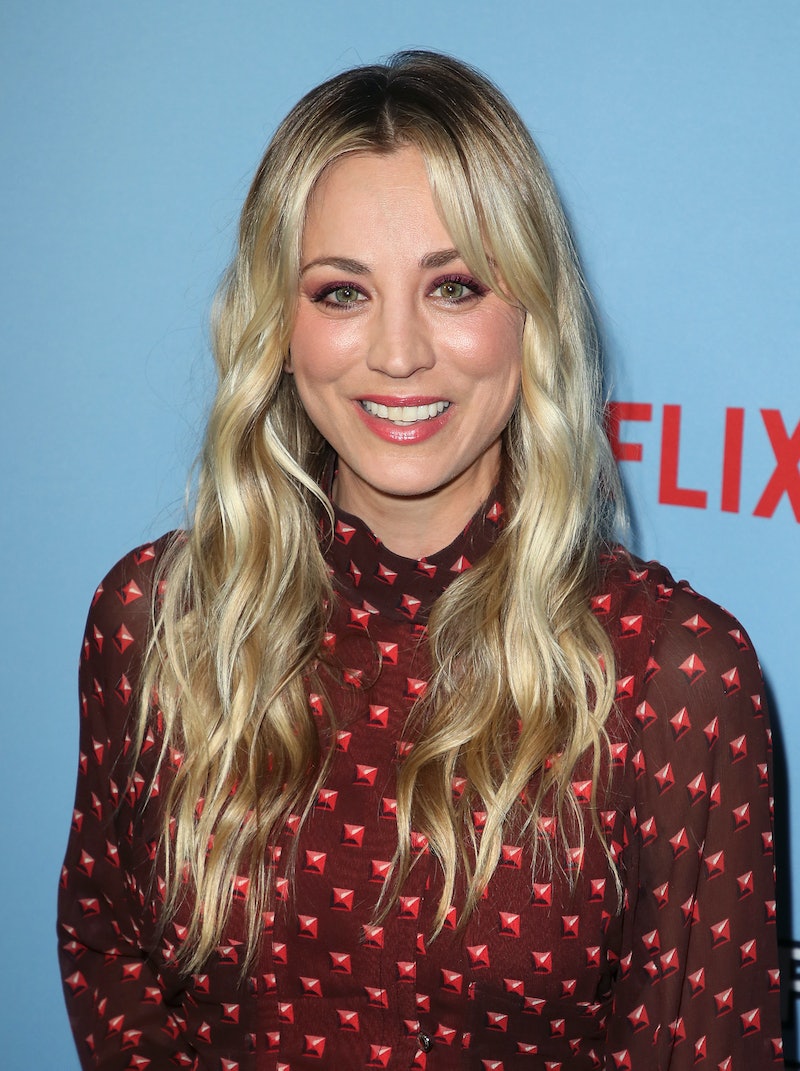 The Hollywood Foreign Press Association unveiled the list of nominations for the forthcoming 78th Golden Globe Awards on Feb. 3. Included are historical nods for the women directors of Promising Young Woman (Emerald Fennell), One Night In Miami (Regina King), and Nomadland (Chloe Zhao), and a whopping six inaugural nominations for Dan and Eugene Levy's Emmy-winning sitcom Schitt's Creek. Another first-time nominee is Kaley Cuoco in the Best Performance By An Actress In A TV Series — Musical Or Comedy category for her leading role in HBO Max's The Flight Attendant. Upon hearing the news, Cuoco burst into tears of joy, and it was all caught on video for all the Cuoconuts — the actress' unofficial fan army — to enjoy.

Based on the novel of the same name by Chris Bohjalian, The Flight Attendant follows alcoholic aircraft stewardess Cassie Bowden (Cuoco) as she embarks on a tryst with a passenger in Bangkok that ends in his death. Considering her blackout from the night before, Bowden has no idea what happened and spends the entirety of Season 1 retracing her own messy steps, trying to figure out who the man's killer is, and dragging everyone close to her along the way.

Cuoco's vulnerable and comedic take on the troubled character shined throughout the series, which she executive produced. It garnered the actress widespread critical praise and rightfully earned her a Golden Globe nomination. The Flight Attendant also earned a nomination for Best Television Series — Musical Or Comedy, the only HBO Max show to earn a spot in the category. In two videos posted to her Instagram page, Cuoco documented her emotional reaction to the news.

Right as Sarah Jessica Parker announced Cuoco's name among the list of nominees for Best Performance By An Actress In A TV Series — Musical Or Comedy, the actress covered her face and burst into tears, only pausing to let out an excited "Oh my God!" Cuoco then exclaimed, "I can't believe it," amid a hybrid laughing and crying fit. "Thank you Golden Globes and HFPA," she captioned the video. "I will never ever forget this moment and I can’t stop crying... So proud of my entire team."

The nomination is especially significant as her most notable role to date was playing Penny for 12 seasons on The Big Bang Theory. That credit mainly earned the actress nominations at the Teen Choice and Kid's Choice Awards — a far cry from the prestigious Golden Globe trophy she could take home on Feb. 28.

Below, fans react to Cuoco and The Flight Attendant's nominations on social media.