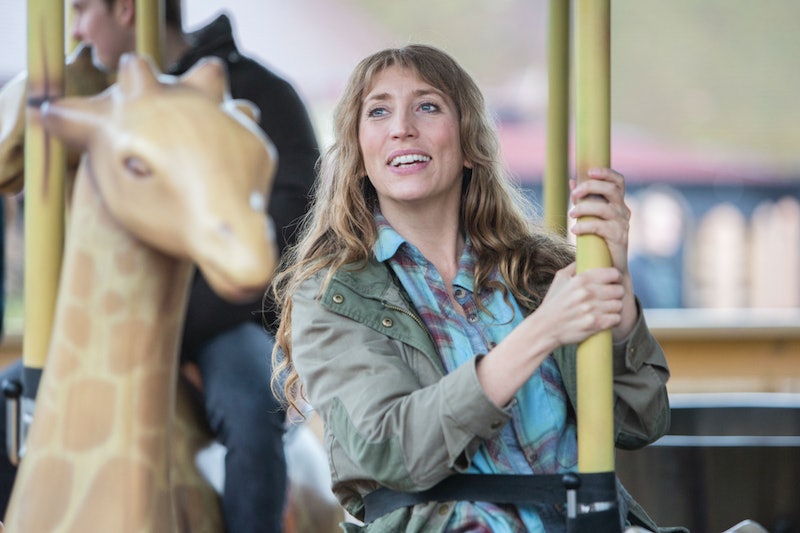 BBC's dark comedy Back To Life follows the story of Miri, a woman who is navigating life after leaving prison following a lengthy sentence for a shocking crime. The series, which recently returned for its second outing, takes place during the first weeks after Miri's release and follows her as she struggles to rekindle relationships and lead a "normal" life. To keep viewers on the edge of their seats, the writers didn’t reveal the exact details of Miri's criminal history right off the bat in season one. So, in case you’ve forgotten what crime Miri committed in Back To Life, you can find a refresher of what went down below.

During Season 1 of Back To Life, which is currently available to watch in its entirety on BBC iPlayer, it is revealed that Miri was convicted of murdering her best friend Lara by pushing her off a cliff. Throughout the season, Miri stands by her claim that the murder was accidental, stating that her friend attacked and bit her in a fit of unexplained rage. (The explanation eventually comes during the season's explosive finale and has everything to do with an affair). However, members of Miri's community aren't convinced by her story and believe she is a cold-blooded killer.

As mentioned, Back To Life follows the story of Miri who, after an 18-year prison sentence, returns to her tiny hometown of Hythe, where she grew up. Miri is played by actor Daisy Haggard, who also wrote the BBC series. Haggard previously revealed that the character is in some ways modelled on herself. "In some ways, Miri would be how I would be in some situations," the actress told the Radio Times. "She gets pushed to the floor and bounces back up again, she’s an optimist and she’s positive and essentially not what you would expect from her shocking past. I do not have her shocking past but I share her relentless optimism."

Back To Life returned for a second series in August 2021, and follows Miri as she continues to adjust to post-prison life after the truth surrounding Lara’s death was revealed. Per Radio Times, Daisy Haggard reprised her leading role of Miri for Back to Life series two and is joined by returning cast members Adeel Akhtar as Billy, Geraldine James as Caroline, Richard Durden as Oscar, Jo Martin as Janice, Jamie Michie as Dom, Juliet Cowan as Tina, and Christine Bottomley as Mandy — all of whom are joined by some brand new additions to the cast including Meera Syal and Adrian Edmondson.

Commenting on the future of the series, show creator and lead star Haggard revealed that a third season of Back to Life is most definitely a possibility. “I knew how season two was going to end precisely, like I’d written season one. But there is always a possibility for more,” she told the Radio Times, adding, “These first two seasons cover her immediate period of having left prison, so I always say yeah… We definitely have quite a clear idea about what that would be too.”

Back To Life seasons one and two are available to watch on BBC iPlayer.