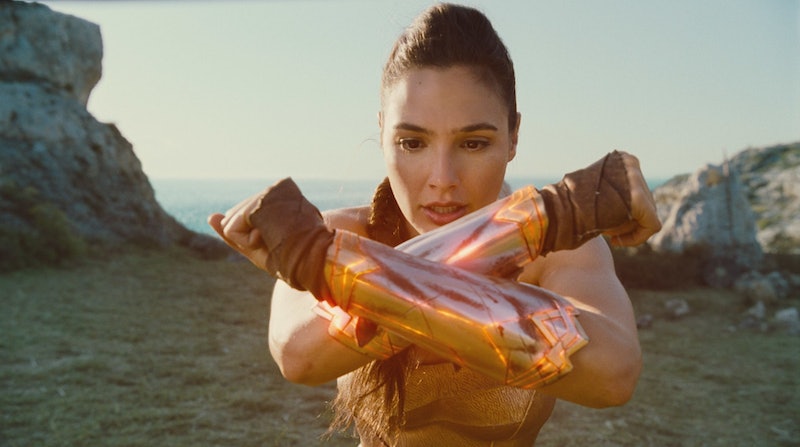 When it comes to DC superheroes, Wonder Woman is sort of like a mix between Superman and Batman. Whereas Superman relies solely on his superpowers to fight crime, and Batman depends wholly on his gadgets, Wonder Woman utilizes both her innate superhuman abilities as well as some cool gear. She possesses the lasso of truth, her magical sword and shield, and of course, her bracelets. But just what do Wonder Woman's bracelets do? Surely they serve a greater purpose than looking badass (though they do that, too).

The bracelets actually have a name, The Bracelets of Submission, and they've been around for as long as Wonder Woman herself. While some of their purpose and powers have changed over the years, one thing about the bracelets has remained constant, and that is their defensive capabilities. The bracelets are nearly indestructible, similar in nature to Captain America's shield, and are capable of repelling all sorts of attacks. Traditionally though, dating back to her first comic book appearances in the 1940s and continuing to the present day in the Wonder Woman film, The Bracelets of Submission are often used to block bullets, leading some to refer to them colloquially as Wonder Woman's bulletproof bracelets.

Early on in Wonder Woman's publication history, the title Bracelets of Submission had a much more literal meaning. They were worn by the Themyscirans as a reminder that they were once enslaved by men, and the bracelets still had the weakness where if they were chained together by a man, then the wearer (including Wonder Woman) would become helpless. This facet of the bracelets has been done away with in recent years, and in exchange for losing an admittedly lame weakness, the cuffs have gained a sweet new power.

Over the past 30 years in the comics, Wonder Woman has been able to use her bracelets as an offensive weapon, too. By smashing them together, she can create a powerful wave of energy capable of toppling even the strongest of enemies. This ability has made it to the movies as well, as she used the effect against Doomsday in Batman v Superman, and also makes use of it in Wonder Woman. And while it's a relatively new ability for the character, at least when taking her entire comic book history into account, it's now become one of the trademark moves of the cinematic version of the character — probably because it looks pretty awesome on screen.

Wonder Woman's bracelets have always been a key part of her character, and that continues with their appearance in Wonder Woman. They're one of the coolest pieces of gear owned by any superhero, and the fact that they also look totally badass is just icing on the cake.

What's more, with the Wonder Woman 1984 trailer, fans were introduced to one of Diana's perhaps lesser-known, yet thoroughly iconic, armored looks, and it's one with a fascinating backstory. As Polygon explains, Diana's winged, golden eagle armor made its premiere in comic books, designed by artist Alex Ross for DC's 1996 Elseworlds: Kingdom Come arc. As Entertainment Weekly shares, Diana donning the armor is a symbol of a Diana who is preparing for battle; a contrast to the Diana who seeks peace over violence.

It'll be interesting to see what the golden armor comes to mean when WW1984 rolls around, and whether Patty Jenkins' interpretation of the armor stands apart from previous iterations of it.

This article was originally published on May 31, 2017