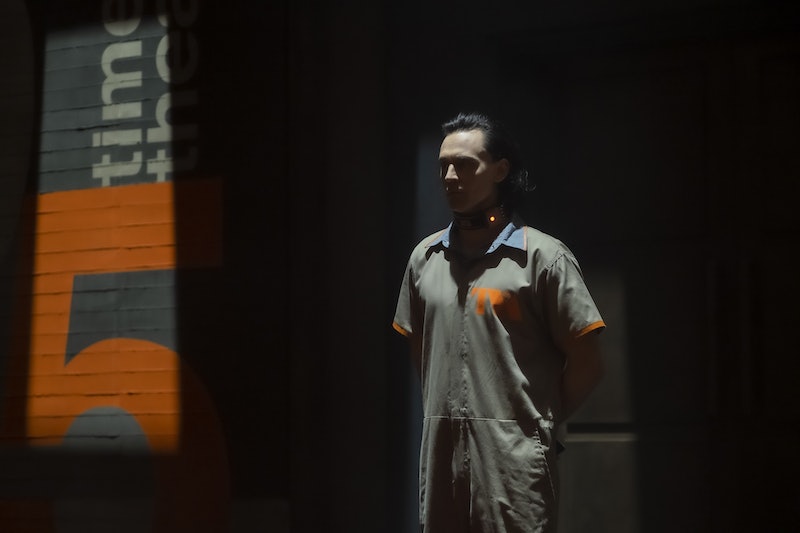 Spoilers ahead for the Season 1 premiere of Loki. Loki wastes no time delving into the consequences of Loki deviating the timeline. Within the first few minutes of the new Disney+ series, the God of Mischief is apprehended by the Time Variance Authority (TVA), an expansive bureaucracy that upholds the proper flow of time. A skeptical Loki is then whisked back to TVA headquarters, where he stands trial for his crimes against the “Sacred Timeline” — the multiverse’s singular timeline created, protected, and preserved by the TVA. After finding Loki guilty, the presiding judge, Ravonna Lexus Renslayer (Gugu Mbatha-Raw), sentences him to be “reset.” It sounds like an ominous fate, but one that remains a mystery for the time being, as high-ranking TVA agent Mobius M. Mobius (Owen Wilson) asks to interview Loki one-on-one for information, thereby saving him from learning what exactly “reset” means.

The episode flirts with the concept of “resetting” several times, but never explicitly explains it. Thanks to a couple of hints, however, there are a few things we can glean.

Why Does The TVA Need To Reset?

The TVA responds to Nexus Events, which are departures from the Sacred Timeline. There are propaganda-style posters all over the TVA headquarters to remind employees that Nexus Events “must be pruned.” It’s a friendly way of saying that any and all deviations from the Time-Keeper’s dictated timeline must be done away with. The TVA is able to maintain the sanctity of time flow with the use of resets.

What Are Reset Charges?

At the beginning of the episode, Loki is throttling through the Gobi Desert with the aid of the Tesseract. Having narrowly avoided being thrown in an Asgardian prison, Loki’s freedom lasts only moments before the TVA shows up and slaps a time collar around his neck to control and rewind his movements. With Loki subdued, the TVA sets a reset charge in order to eradicate temporal branches, snuffing out the potential for a new reality to form. The charge itself is a small device that glows orange and purple when activated. It goes off with creeping violet light that sweeps across the ground and... well, we don’t know much more than that. Before we can see the charge’s effect on the Gobi Desert, the show cuts to TVA headquarters. However, unlike the audience, Loki does get a glimpse of the active charge before being yanked away by the TVA, and if his face is any indication it seems very unpleasant.

So What Do We Actually Know About Resetting?

In short, not much, but it’s probably pretty terrible. In the same way that timeline deviations create alternate realities, they can also give way to variants, and Loki, having essentially created a new reality, is classified as such. Besides Loki’s trial, the only other time resetting is mentioned is in a brief confrontation between Mobius and Hunter B-12 (Wunmi Mosaku). After Loki escapes from his interview with Mobius, Hunter B-12 insists on resetting the variant (Loki), but Mobius is less than enthused about the idea. Hunter B-12 also instructs her unit to “prune [Lokik] on sight,” which indicates that her solution for dealing with him might be very similar to the way in which they dealt with the Gobi Desert Fiasco.

The TVA’s sole purpose for existing is to protect the proper flow of time. All variants, temporal and corporal, must be dealt with in order to preserve the Sacred Timeline. As a deviation himself, Loki is as prune-worthy as any variant timeline that’s cropped up in the history of the Multiverse. Whether or not resetting is just bureaucratic speak for eradication remains unclear, but with Loki’s fate still in the hands of the TVA, we’ll find out soon enough.