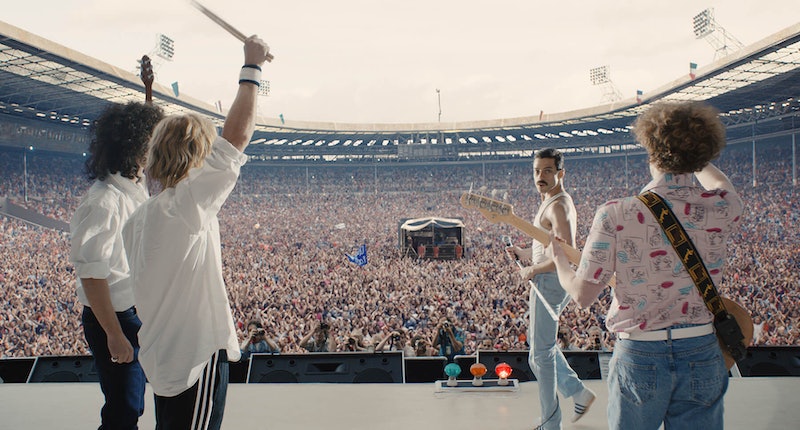 Bohemian Rhapsody largely functions as a biopic about the legendary Queen frontman Freddie Mercury, but the 2018 box office hit was also a major Hollywood motion picture. With that being the case, the film predictably takes some liberties with the truth in order to make Mercury's life story more dramatic and, well, more like a movie, and that includes the casting of a villain. That role is mainly filled by Paul Prenter (Allen Leech) in the movie, as the singer's former manager is not presented in the best light. But what happened to the real Paul Prenter? Spoilers for the movie ahead.

In real life, Prenter was a radio DJ from Belfast, Northern Ireland, who eventually met and became involved — both personally and professionally — with Mercury. It’s widely believed that Prenter first met Mercury at a bar in 1975 and then became his manager in 1977. At some point during this time, Prenter and Mercury had a sexual relationship — something Prenter later allegedly used to blackmail Mercury, who wasn't technically out of the closet at the time. Their business relationship was thought to be largely positive for about the first five years of Prenter working for Mercury, but things started to head south in 1982, according to Metro UK.

Prenter is not known to have gotten along well with any of Queen's other members, and their fractured relationship reportedly came to a head with the release of the band's 1982 album Hot Space. According to Metro UK, band members Brian May and Roger Taylor disliked the record's sound and blamed Prenter's influence for it coming out the way it did. Still, Prenter remained in Mercury's employ for several more years.

In the film, Mercury finally fires Prenter in 1985, with the main reason being that the manager failed to inform Mercury about the opportunity for Queen to perform at the now-iconic Live Aid concert. In retaliation, the jilted Prenter then gives a television interview where he outs Mercury. In reality, Prenter was fired the following year, after the Live Aid concert, according to the Belfast Telegraph. As for Prenter's most well-known “villainous” moment, he didn't actually give a TV interview outing Mercury. Instead, he sold a story to The Sun tabloid in 1987 where he revealed Mercury's sexuality and also outed the singer's relationship with Jim Hutton, much to Mercury's chagrin, according to Slate.

Bohemian Rhapsody, “A Tribute To Queen”

So the movie mixes up some facts regarding Prenter, possibly making him out to be more of a villain than he was in real life. But unfortunately for him, he won't be able to tell his side of the story. That's because Paul Prenter died in 1991 due to complications from AIDS, per The Belfast Telegraph. Coincidentally, that's the same year the disease took the life of Mercury.

In 2019, Prenter’s brothers Stephen, Gerard, and Ray spoke to The Belfast Telegraph about his portrayal in the film, which they were not fans of. “The film was like a Disney movie with all these good characters and then one villain in the shape of Paul,” said Gerard. “They would never have dared to do it had Paul been alive. It is a cowardly way of going about things. They set out to destroy his name knowing he is dead and can't answer back.”

Ray shared a similar sentiment, telling the publication: “Paul didn't have a nasty bone in his body. He was a very gentle and kind guy. The film has blackened Paul's name.”

Stephen expressed similar thoughts. However, he also denied the long-held belief that Prenter and Mercury were in a relationship — and used an outdated term to describe their sexualities. "It's ludicrous. Paul and Freddie were best friends, that is it. They went everywhere together; they went to gay clubs together,” he said. “They were both queens. They liked to chase after masculine men — that was their type. They definitely weren't into each other.”

He continued: "I heard Paul's side of the conversation, and they would gossip about the band, about men in their lives. They would laugh, but they were never lovers... I can say 100% categorically Freddie and my brother were not involved sexually in any context. Anyone who knew them knew that.”

Another part of the film that upset the siblings is the portrayal of their parents as homophobic towards Paul. “My parents knew about Paul being gay since he was 16... He'd come back on holidays with his boyfriends and stay at my parent's house in Dublin with his partners staying in the same bedroom,” added Stephen. “So there was never any issue. The only person who had an issue with being gay was Freddie. Freddie never once in his life admitted to being gay. It was an open secret, but never once did he say, ‘I’m gay,’ whereas Paul was very open about it.”

Gerard also pushed that their parents were accepting of Paul’s sexuality long before he met Mercury. "Paul had boyfriends when he started DJ-ing. He never lived in fear of our father. Both he and my mother were ordinary people and very liberal-minded, really good parents,” he said. “He ended up burying his son after he died of AIDS, so for the makers of the film to portray the family like that is a disgrace.”

As far as Prenter’s decision to out Mercury to The Sun, the brothers said he was upset that the band had fired him, leaving him unable to pay for his AIDS treatment. “Paul was very bitter. He felt they let him down, and he was hurt. He worked for them for years, and he got very little from them,” said Ray. “That was when he decided he had to get a few bob for his own treatment. So that is why he went with the papers.”

All movies need a villain, and that includes biopics. Prenter is presented as the bad guy in Bohemian Rhapsody, but having worked as Freddie Mercury's manager for nearly a decade, it's hard to believe that all of those years were as contentious as the film shows. Prenter is gone now, but his legacy lives on in the film. It just may not be the legacy he wanted.

This article was originally published on November 1, 2018