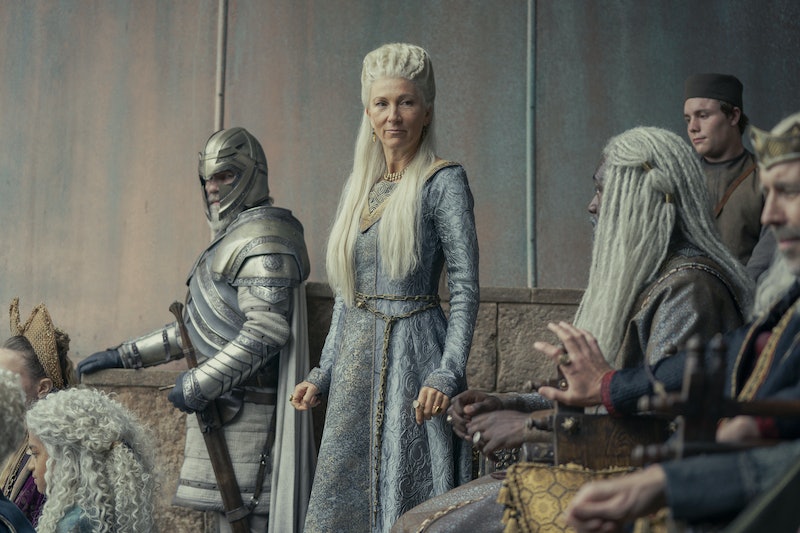 Spoilers ahead for House of the Dragon Episode 9 and the Fire & Blood book. Last week, King Viserys’ death broke many a House of the Dragon fan’s heart. But clearly, the show isn’t giving us too much time to grieve. In Episode 9, we see the Dance of the Dragons officially commence — and in the civil war among the Targaryens, sides are already coming together. As someone who supports Rhaenyra, Rhaenys is imprisoned to prevent her from spilling about (and interfering with) Aegon’s coronation. Ultimately, she escapes in epic fashion, but that’s just one small victory in a large, looming conflict. So, what happens to Rhaenys during the war?

In Fire & Blood, the book House of the Dragon is based on, Rhaenys sadly doesn’t last too much longer. She carries out an important role during the early days of the civil war, where she’s first tasked with flying her dragon, Meleys, above the Velaryon’s naval fleet to bolster their defense. And after Aemond killed Lucerys, Rhaenys and Corlys Velaryon oversaw the war council to give Rhaenyra time to grieve her son.

However, it was a short-lived post. At one point, Rhaenys flew with Meleys to Rook’s Rest where military backup was requested. However, this was Ser Criston Cole’s plan all along. After Rhaenys fell into his trap, his army attacked her and Meleys with a barrage of arrows. While Rhaenys and her dragon were able to survive the attack, they weren’t so lucky when Aegon and Aemond showed up on Sunfyre and Vhagar, respectively.

The three got into a massive firefight in the sky, and both Rhaenys and Meleys were killed. (Technically, George R. R. Martin writes, Rhaenys’ body was “blackened” beyond recognition, but it’s all but certain she died right next to Meleys.) To make matters even sadder, Meleys’ head was used as a trophy of sorts, a reminder of just how formidable Aegon’s side truly was.

Corlys was naturally heartbroken by the news — and angry, too. He actually took it out on Rhaenyra, blaming her for not going to Rook’s Rest herself and for not allowing her sons to accompany Rhaenys there. The reason for both of these things, of course, was that Rhaenyra was still mourning the loss of Lucerys, and she didn’t want to lose any more sons. Sadly, that ends up happening in Fire & Blood anyway, and none of her sons with Laenor (or is it Harwin?) survive the Dance of the Dragons.

More like this
'GoT' Star Emilia Clarke Says She "Just Can't" Watch 'House Of The Dragon'
By Brad Witter
Netflix Shut Down 'Bridgerton' S3 Rumours About A “Very Dark” Storyline
By Bustle
'RHOSLC' Star Jen Shah Refuses To Do A Post-Sentencing Interview With Andy Cohen
By Brad Witter and Jake Viswanath
Bill & Frank’s 'The Last Of Us' Episode Has Twitter Emotionally Wrecked
By Alyssa Lapid
Get Even More From Bustle — Sign Up For The Newsletter
From hair trends to relationship advice, our daily newsletter has everything you need to sound like a person who’s on TikTok, even if you aren’t.