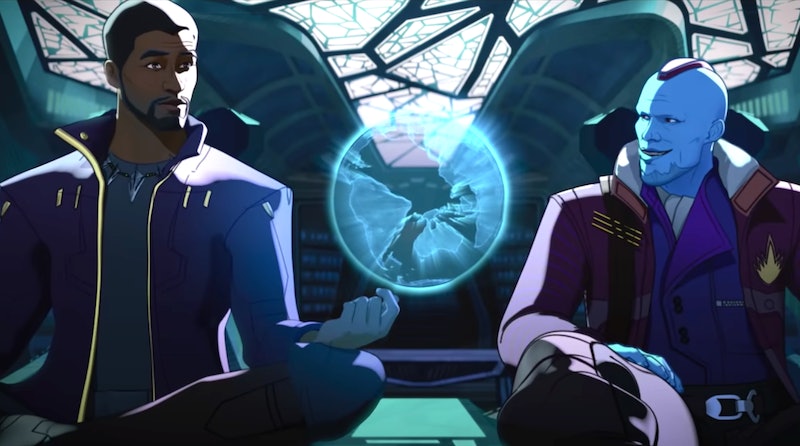 Marvel Studios’ first animated series What If...? reimagines the Marvel Cinematic Universe. Picking up after Loki destroys the Sacred Timeline, the 10-episode anthology series revisits events from the films but flips the details in surprising ways. What if Peggy picked up the shield instead of Steve? What if T’Challa led the Guardians of the Galaxy? What if Killmonger was a hero?

Though it centers around hypothetical storylines, the show is considered just as integral to the events of the MCU as WandaVision and Loki. “It’s no coincidence that [What If?] picks up right after Loki,” executive producer Brad Winderbaum said at a press conference, per Slash Film. “The multi-verse has erupted in every possible direction. What if…? gives us a chance to explore that.” He later explained to Slash Film that each episode of the series is “essentially a separate universe” and you can see the moment when “the universe branches.”

Since it’s all about revisiting events from the films, the What If...? voice cast features many of the live action actors reprising their roles. This includes most of the Avengers: Benedict Cumberbatch as Doctor Strange, Chris Hemsworth as Thor, Don Cheadle as War Machine, Evangeline Lilly as Wasp, Jeremy Renner as Hawkeye, Mark Ruffalo as Hulk, Paul Bettany as Vision, Paul Rudd as Ant-Man, Samuel L. Jackson as Nick Fury, and Sebastian Stan as Bucky. Many of their allies are also returning, such as Benedict Wong as Wong, Clark Gregg as Agent Coulson, Emily VanCamp as Sharon Carter, Danai Gurira as Okoye, Hayley Atwell as Peggy Carter, Karen Gillan as Nebula, Kat Dennings as Darcy, and Natalie Portman as Jane Foster.

On the flip side, there are a number of actors who aren’t reprising their parts. Surprisingly, they are some of the most recognizable names in the MCU, like Robert Downey Jr. as Iron Man, Chris Evans as Captain America, Scarlett Johansson as Black Widow, Elizabeth Olsen as Scarlet Witch, and Zoe Saldana as Gamora. “Schedules are crazy,” director Bryan Andrews explained to GamesRadar+, so they were given "a certain degree of freedom” when it came to recasting the roles. “It’s really hard to get everybody. But the ones we had come in to take over did a fantastic job.”

The series will also feature Westworld’s Jeffrey Wright as Uatu, aka The Watcher, the all-knowing and all-seeing being who will lead viewers through each story. “He's described as the most dramatic being in all [of] the multiverse when he first appears in Fantastic Four in 1963 on the cover of the comic book, so this idea of the most dramatic being in anyone's imagination gives you a lot to play with,” Wright told Entertainment Weekly. “I love the idea of just being able to be theatrical and a little over the top and at the same time kind of subtle with the language.”

Most notably, What If...? will feature Chadwick Boseman, who died of colon cancer in 2020, reprising his role as T’Challa one last time. In this version, it’s T’Challa, not Peter Quill, who is abducted from Earth as a child and who becomes Star-Lord, rather than the King of Wakanda. “We only got [Boseman] for such a small moment, compared to the experience of everyone who worked with him on Black Panther, or Ma Rainey, or any of the other things that he's done. He was amazing,” Andrews told Screen Rant. He explained that Boseman was one of the first actors who responded to the call for the show. “He was really excited about this version of T'Challa because he got to be a little bit goofy and got to be a little bit funny. He didn't have the mantle of the king, so it was a different way for him to put his stamp on T'Challa ... It was just so amazing, just seeing him work, having a front-row seat to that, and helping him bring this to life.”

More like this
Twitter Is Overjoyed By Angela Bassett’s Record-Making Oscar Nomination
By Maxine Harrison
New Details About Jeremy Renner's Snowplow Accident Reveal The Actor's Intentions
By Sam Ramsden
Everything To Know About A Potential 'Lockwood & Co.' Season 2
By Gretchen Smail
All The ’70s Easter Eggs You Missed In 'That ’90s Show'
By Grace Wehniainen
Get Even More From Bustle — Sign Up For The Newsletter
From hair trends to relationship advice, our daily newsletter has everything you need to sound like a person who’s on TikTok, even if you aren’t.