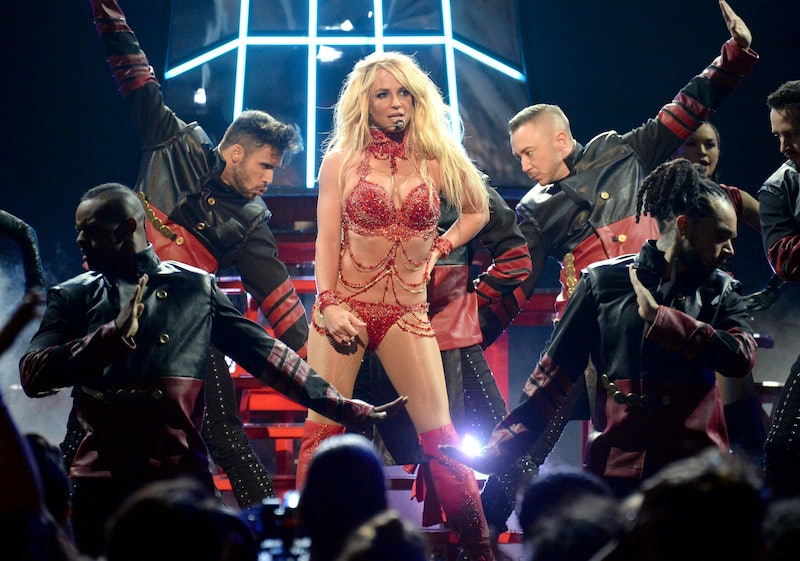 With picturesque stock images, throwback red carpet photos, and endless videos of the pop princess modeling her wardrobe sprinkled throughout her grid, Britney Spears’ Instagram page is a bit of an enigma. It seems to be the most direct outlet through which Spears communicates with her fans, especially since she reportedly refuses to perform under her current conservatorship terms. But that doesn’t mean everyone understands it — there are fan-created podcasts deconstructing it, TikTok users speculating about hidden cries for help in her posts, and many confused Instagram users in her comments section. Even her biggest fans get flustered when it comes to her posts about Project Rose, Project Pink, and Red.

In October 2020, Spears announced that “RED” was coming soon on Instagram with a photo of a rose. While Spears has yet to give an in-depth explanation of this project, in the months after the announcement, she posted several photos containing red clothing items or objects with “RED” written in each of the captions. On March 25, 2021, she posted three pictures in a row: a red refrigerator, a selfie in which she models red fingerless gloves, and a kitten in a red set of drawers. At times, Spears has also called these photos Project Rose. So, it seems the projects could just be a series of carefully curated Instagram posts.

On July 10, after Spears bravely spoke out against her conservatorship on June 23, the “Gimme More” singer mentioned Red yet again on Instagram, saying that the project has done a 360 without providing any additional context. “All has been said and done full circle,” she wrote, captioning a photo of her in red lingerie with black lace. “Back to RED!!!!!” Days later, just before giving a second emotional testimony on July 14, Spears posted a video of her dancing to Billie Eilish’s “Bad Guy” in a red crop top, simply captioned, “RED!!!!” On July 19, she posted a second part to that dance video. “RED!!!!!” she wrote, along with three rose emojis. “Pssss … this is Bad Guy part 2 … same song new dance … if you don’t like it ... don’t watch it.”

Although Spears has now been referring to Red on Instagram for nearly nine months now, she has yet to give an explanation on what exactly it is. On the surface, it does seem that Red and Project Rose is an ongoing series of red-themed photos and videos that she likes and wants to share on the social network that keeps her profile somewhat consistent. Some fans have expressed hope that pink- and red-related posts are weirdly veiled announcements for new music. However, given Spears’ stance that she will not resume her career while her conservator, father Jamie Spears, remains her conservator, this scenario seems unlikely. As such, curating these photos may also just be how Spears chooses to stay creative during this time.

In a July 18 post, Spears addressed critics of her iconic living room dance videos, confirming that she refuses to perform while her father remains in charge of her career. “For those of you who choose to criticize my dancing videos ... look I'm not gonna be performing on any stages anytime soon with my dad handling what I wear, say, do, or think!!!!” she wrote. “I've done that for the past 13 years.” Without plans to get on stage or record music soon, Instagram may be Spears’ only creative outlet for the time being.

In addition, red isn’t the only color that Spears seems fascinated with. On March 29, Spears announced that she would begin rolling out Project Pink. Alongside a photo of Spears posing in a black lace top and blue bra posted to her Instagram page with three different filters, she wrote in the caption, “RED!!!! PS… the project PINK will be revealed next week!!!!” However, not many pink posts actually came to fruition. Just a couple weeks later, Spears referenced Red and Project Rose yet again in two different posts on April 9, which didn’t satisfy fans’ curiosity. “RED is coming to theaters near you,” she captioned one slideshow of herself in a flower crown. “KIDDING folks … but don’t forget Just A Touch of Rose.”

Since Project Rose was going down on Spears’ Instagram page during the airing of Hulu’s Framing Britney Spears documentary, fans began speculating that she was secretly referring to the film when discussing the project — especially since the film’s interviews took place in front of a rosy backdrop. Director Samantha Stark shut down any known connection in an interview with Glamour, claiming that the decor was merely inspired by Spears’ tendency to post photos of the flower. “We filmed this entire thing during COVID; in order to be COVID safe, we had to film outside,” Stark said. “If these interviews are going to be outside, I wanted that to be a motivated, stylistic decision. I didn’t want people randomly outside.”

“I had been looking at Britney’s Instagram a lot, and I noticed Britney loves roses. There are so many posts with pictures of roses and also so many posts of her holding flowers. There’s also this greenery, backyard feel to a lot of her posts,” the director continued. “I really wanted the documentary to live in the world of that. I had this rose wall built for the fans because I was trying to make the amount of roses reflect their relationship to Britney.” She concluded, “We did some interviews, and then Britney posted about Project Rose. That is the order of events. That’s what happened.” Spears has also not been afraid to address the documentary directly on Instagram, as proven by a March 30 post that said she was “embarrassed by the light they put me in,” so it’s unlikely that she was referring to the film at all.

Underneath Spears’ Project Pink announcement post, one commenter summed up what many of us are thinking, writing, “I’m still trying to figure out what the red project was.” Another commenter joked, “Please continue to not provide context for us, queen.” Following the announcement, Spears posted a black and white photo of a woman holding a small dressed skeleton with the tongue-in-cheek caption, “Devil is in the details ... wouldn’t want this baby to hit me one more time!!!!” On the subject, one very confused Twitter user posted, “Now Britney is saying ‘Devils in the details’ ... and what is project pink? We don’t even know what red was?”

Followers will have to stay tuned to Spears’ Instagram to see what these projects turn out to be — that is, if we ever get an official explanation.

More like this
The First Trailer For 'That '90s Show' Includes So Many Nods To The Original Series
By Jack Irvin, Alyssa Lapid and Grace Wehniainen
Stormzy Is Here To Remove The Labels Put On Him As A Rapper
By Maxine Harrison
'Wakanda Forever' Is Already Opening Doors For Mabel Cadena
By Grace Wehniainen
Billie Eilish Has An Exciting Relationship Update About Her Boyfriend
By Grace Wehniainen
Get Even More From Bustle — Sign Up For The Newsletter

This article was originally published on March 30, 2021