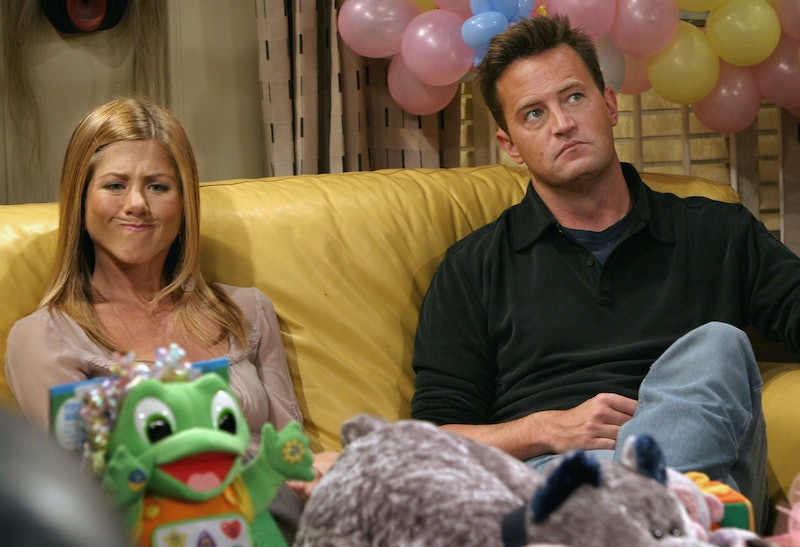 Friends: The Reunion has finally arrived on HBO Max, and it’s getting to the bottom of some long, unanswered questions about the beloved sitcom, one of which is about Chandler Bing’s head-scratching career. The two hour-long special saw the cast play a game of trivia about the series, similar to the one the group played back in Season 4, but there was one question that left them stumped in both 1998 and 2021. During the fears and pet peeves category, Tom Selleck made a guest appearance to ask: What is Chandler Bing’s job?

All of the other cast members on Friends had a definite job title attached to their character: Joey was an actor, Monica was a chef, Ross was a paleontologist, Phoebe was a massage therapist and musician, and Rachel worked multiple jobs within the fashion industry. But, despite seeing scenes of Chandler at work in a big suit behind a desk throughout the series, his actual job description and title has always been a bit blurry.

When Selleck asked the question during the reunion, Matthew Perry immediately put his head in his hands and groaned. Jennifer Aniston guessed that he was a “transponster,” which was her character’s answer in the fourth season, but Courteney Cox and Matt LeBlanc were quick to point that it was both “not a word” and false.

Then Selleck revealed the answer, confirming that “nobody knows, really.” Nobody truly knows, with the most-searched thing ever about Chandler on Google being, “What is Chandler Bing’s job?” according to Google Trends data from 2004 to 2021 provided to Bustle.

The group knows bits and pieces about his job, but certainly not his official title. It’s further highlighted in the episode titled “The One With the Embryos,” which inspired the game the cast plays during the reunion special. In the episode, Rachel and Monica are challenged by Joey and Chandler to a trivia contest for who gets to keep the apartment. The two teams are tied by the end of the game, leading to a lightning round where Ross asks Monica and Rachel what Chandler’s job really is.

The two instantly shriek in horror at the question, but they can recall that it has “something to do with numbers” and “processing,” which ultimately leads to Rachel calling him a “transponster.” Their incorrect answer causes them to lose the apartment, much to the glee of Chandler and Joey.

Chandler’s job wasn’t clarified any further until Season 9 after he quits his job in search of more from life. When he suggests taking back his old job, Monica answers that she wants him to have a job that makes him happy, not “statistical analysis and data reconfiguration.” Chandler is shocked, and remarks: “I quit and you learn what I do?”

While we may never know for sure what Chandler’s official job title was throughout the show, at least we can all take comfort in the fact that the rest of the cast of Friends doesn’t know either.