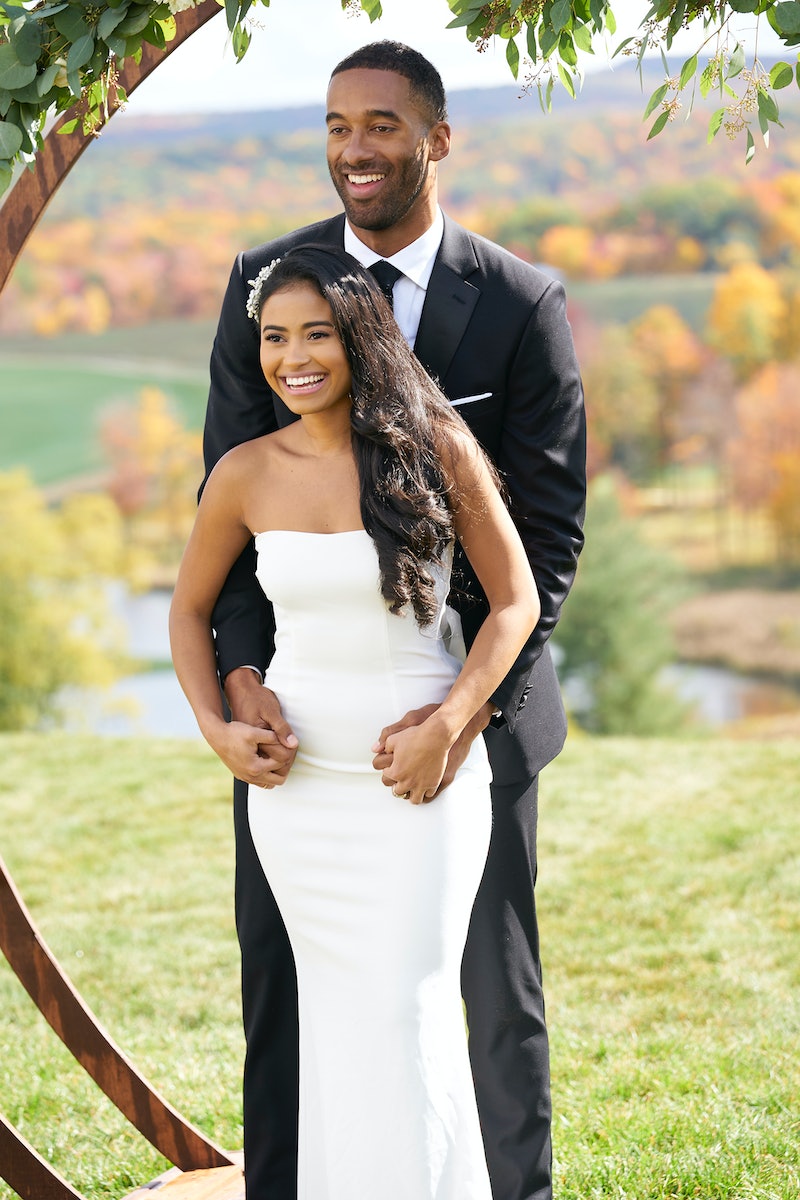 Cue the dramatic music because Jessenia Cruz must endure the long-dreaded Bachelor two-on-one date. After a relatively low-key season as a contestant on Matt James' season, the 27-year-old social media marketing manager will face off against MJ Snyder before the Week 6 rose ceremony. Despite MJ's insistence that she "preaches harmony and peace," the last episode ended with the 23-year-old hairstylist lashing out at a far calmer Jessenia just as Matt walked into the room.

The confrontation between Jessenia and MJ stems from bullying accusations involving MJ's use of "Varsity" and "JV" when describing the new versus original women on The Bachelor Season 25. While Jessenia's fate on The Bachelor remains to be seen, her social media presence has remained well-lit and drama-free. She returned to her home base in San Antonio, Texas, and she can often be found artfully lounging outside for photoshoots or playing with her dog, Bexie.

Most of Jessenia's captions are kept short and sweet, much like her assessment of MJ's three personalities. ("Who you are at the house, who you are with Matt, and who you are when the cameras are on.") A Jan. 13 shot of herself in an orange dress near some greenery came with a "Tangerine Dreams 🍊☁️" caption, while an up-close image of Jessenia in a Western-inspired outfit reads, "This was fun. 🤠" Jessenia even teased her time on The Bachelor with a meme on New Year's Eve. "2020 was challenging for all of us, but I like to think that things can only go up from here. Wishing everyone a Happy (and healthy) New Year. ♥️" she wrote alongside a photo of herself exiting the limo on night one of The Bachelor.

Jessenia's social media finesse is no accident. After being crowned Miss El Paso 2016, this pageant professional put her bachelor's degree in communication and media studies from the University of Texas at San Antonio to good use. According to her LinkedIn page, Jessenia is currently a sole proprietor of a San Antonio social media marketing company.

Considering the Instagram influencer fame of many previous Bachelor contestants, her skills on the 'gram will come in handy as she continues to build her online presence. And — who knows— Jessenia might trade the Texas heat for a tropical beach in Mexico when Bachelor in Paradise premieres next summer.

More like this
10 Photos Of The Wildest Limo Arrivals From 'The Bachelor' Premiere
By Brad Witter
A Guide To All Of Zach Shallcross' 'Bachelor' Filming Locations
By Brad Witter
Zach Swears He Didn’t Look Up Contestants Before The Bachelor Began Filming
By Brad Witter
The Bachelor’s Christina Mandrell Comes From One Of Country Music’s Most Famous Families
By Brad Witter
Get Even More From Bustle — Sign Up For The Newsletter
From hair trends to relationship advice, our daily newsletter has everything you need to sound like a person who’s on TikTok, even if you aren’t.