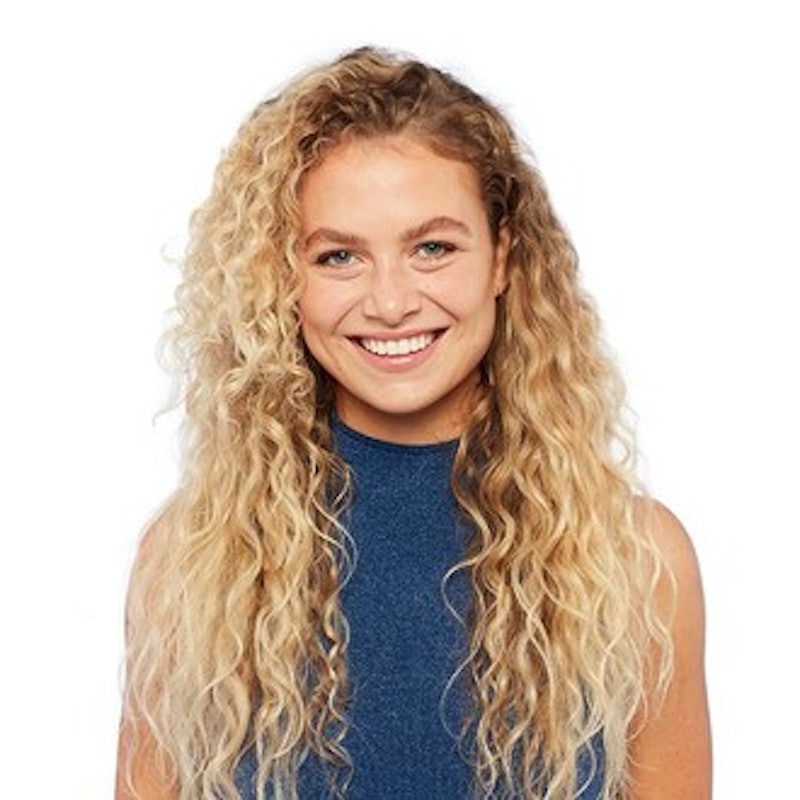 Traveling from Hudson, Ohio to Pennsylvania's Nemacolin Woodlands Resort to compete for Matt James' love on this season of The Bachelor is MJ Snyder, a 23-year-old, curly-haired beauty expert. According to host Chris Harrison's "Meet the Women" introduction video, MJ — whose full name is Meredith J. Snyder — is bold, outgoing, competitive, and she "always finds a way to make her presence known." Here's everything we know about her so far:

Per her public ABC bio, MJ works as a hairstylist. "I mean, could she have any other career with that hair?" joked Chris Harrison. It's unclear if MJ works at one specific salon, but her @hairbymj___ Instagram account reveals that she provides "lived-in color and hand-tied extensions."

In an interview with Iles Formula, the Ohio native revealed that she first worked in PR in New York City before opening a mobile tanning salon. She finally decided to go into hairstyling after working during New York Fashion Week and realizing it was her passion. "This is the path I chose, and I couldn't imagine doing anything else!" she told the publication.

MJ is an avid user of her main Instagram account, which has 78 posts and boasts nearly 15k followers. As her bio states, she's an Ohio State alum and a self-described hype woman. Her feed is filled with beach pics and snaps of her hanging with friends and styling hair. Before the pandemic, she was an avid traveler and posted photos in New York, Morocco, and Italy.

Two years ago, MJ also posted a photo of herself in a spot-on Beychella costume for Halloween.

MJ Shares A Major Fear With A Bachelor Alum

According to Harrison, MJ has a phobia that makes its way into this season's storyline. "Do you guys remember Annaliese, with the dogs and the bumper car phobia?" asked the host, referencing Annaliese Puccini and her now-infamous childhood bumper car trauma from Season 22. "MJ has something very similar," he said. If you thought ABC would spare MJ and refrain from tormenting her with her phobia, you clearly haven't been watching. He added, "You guys are going to enjoy that. We might even top it."

It's unclear how far MJ will make it this season, but it already sounds like she won't hesitate to make bold moves to make an impression on Matt.

More like this
Former 'Bachelor' Producer Elan Gale Knows The Secret To Your Favorite Shows
By Samantha Rollins
It’s Official: The Bachelorette Is No Longer A Fairy Tale
By Samantha Allen
Everything To Know About 'Bachelor' Host Jesse Palmer
By Justice Namaste and Radhika Menon
Memes & Tweets About Logan Switching From Rachel To Gabby On 'The Bachelorette'
By Grace Wehniainen
Get Even More From Bustle — Sign Up For The Newsletter