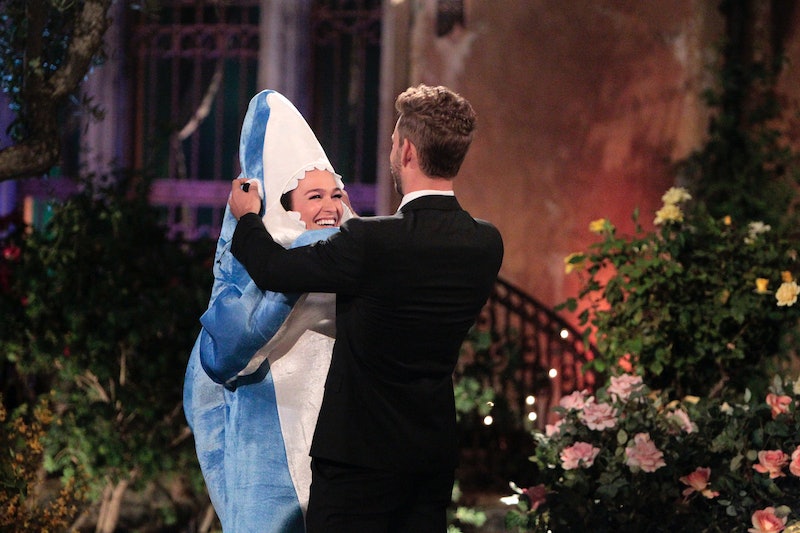 I only had one question for Alexis Waters about her life after The Bachelor once we started speaking over email: does she now know the difference between a dolphin and a shark? It was a running joke on Nick Viall's season when she showed up in a shark costume but kept insisting that — as an Aspiring Dolphin Trainer — she was dressed like a dolphin. "I mean clearly I knew it was a shark, but the dolphin costumes were out of stock so I just kept saying it was a dolphin to mess with everyone," she tells Bustle. "It worked because one, I got a rose, and two, everyone knows me as 'dolphin girl,' which I honestly don’t know if that's something to brag about," she adds with a laugh.

Just like she wasn't really a dolphin, she also wasn't really an Aspiring Dolphin Trainer. She says she made up the job description while filling out an application for the show. "That really was my childhood dream job and at the time when I was filling it out I thought it was so funny. Probably because I was stoned," she says. Bachelor Nick Viall got a kick out of it too, but he and Alexis never developed a relationship beyond a friendship, so he eventually sent her home. Still, Alexis did find a boyfriend thanks to the show. She started dating Tyler Fernandez over two years ago after one of Rachel Lindsay's friends introduced them. "So basically I have to thank Kaitlyn Bristowe for dumping Nick Viall, because then I wouldn't have been on his season where I met Rachel," Alexis says.

It wasn't love at first sight. Initially, Alexis wasn't a fan of Tyler's "Johnny Bravo" hair. "His hair was like six inches high. He basically had a Snooki poof," she says. But after seeing him in a hat, she changed her mind. Since then, Tyler's hair has gone down about three inches, "So we're making progress," she says. Now, the two have plans to get married. "We talk about our future all the time," she says. "But this year has been such a wild year that we have just been focusing on building our businesses and trying not to kill each other during this global pandemic."

Alexis has a couple of business ventures right now. Two years ago, she launched Hoop Nation, a jewelry company that specializes in Alexis' favorite hoop earrings but sells other jewelry, too. She also recently took over as co-host of the podcast Girls Night, alongside her Bachelor bestie Raven Gates. They talk about all things Bachelor, but also dating, pop culture, and life in general. She says she wants the podcast to be a beacon of positivity and joy in this tough time.

Basically, Alexis is the same person fans met three years ago on The Bachelor. She's fun, loves to make people laugh, and is still following her own advice to "choose to be a dolphin in a world full of sharks."