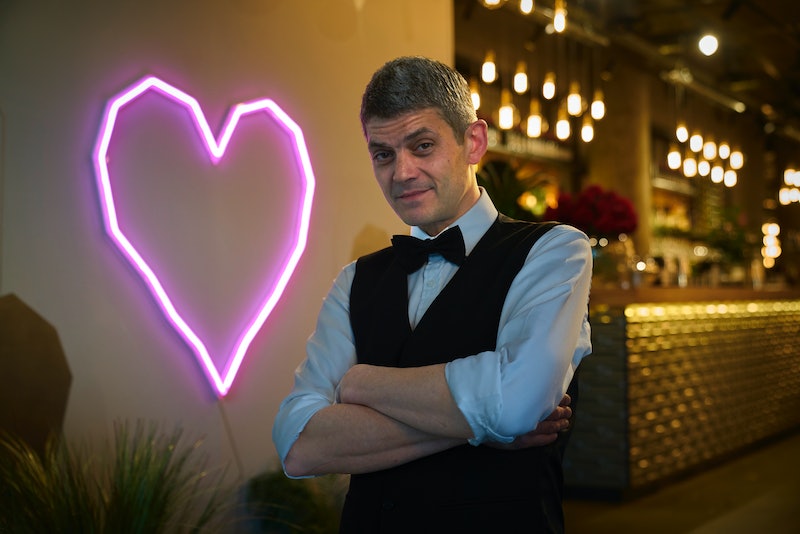 With a new location, and new waiting staff, First Dates returns to screens on Jan. 19. While the pandemic has affected the production of many shows, fear not, there will be no Zoom dates in sight here. First Dates remains, as ever, perfect escapist TV – remember when you were allowed to go to a bar, and flirt with a stranger? In the world that First Dates has – safely – created, you still can. The making of series 16 did involve a lot of pandemic-related hurdles, however. So, when was the new series of First Dates filmed? And how did they ensure it was COVID-19 safe?

As bars and restaurants closed intermittently during 2020, First Dates had to put filming on hold. It’s been reported that filming for the new series started in March 2020, but when the first national lockdown was announced they paused production. Filming resumed in Sept. 2020, under strict restrictions to keep production staff and daters safe.

New waiter David told the Manchester Evening News: "When we are filming it's a closed set, and our restaurant is not open to the general public. While we were there we did follow strict protocol, which did enable us to be in a safe environment, which did allow some daters to kiss if they wished." Similarly, executive producer Jon Crisp told the BBC that the crew and contestants were all tested for COVID-19 before entering the restaurant.

You can still expect to see Fred heading up proceedings, but not from his usual spot in London, as the show has moved up north. Instead of the London location viewers are used to seeing, this season of First Dates was filmed in The Refinery in Manchester. Crisp told the BBC that they’d actually been thinking about the move for a little while, so this wasn't a pandemic-related change. “We filmed a lot there [in London], and we were keen to shake things up a little bit, create a new environment for daters which would keep their experience as real as possible," he said. "Manchester is also quite fun, we've got new waiting staff who are from the area, and that gives us another flavour and different angle, and hopefully it adds a new charm."

Filming restarted during the time that the government was running the Eat Out To Help Out scheme. If you went to a restaurant back then, you’ll remember that there were still social distancing and safety measures in place. However, new bartender Fiona assured fans the restrictions won’t change the show too much. “You probably won't notice the difference," Fiona told the Manchester Evening News. “We were all tested once or twice every other day, and there were procedures in place to make sure it could run as a proper restaurant. And everyone was briefed beforehand so it was made super easy."

While the pandemic threw a spanner in the works for filming, First Dates pulled it off, and the series will be a welcome reminder of what dating – and life – was like pre-pandemic. You can catch the first episode on Channel 4 at 10 p.m tonight.

More like this
We’ve Got A Text! Another 'Love Island' Series Is On The Way
By Darshita Goyal
Fans Have Discovered The 'I'm A Celebrity' Camp's *Exact* Location
By Emma Madden
Twitter Can’t Get Enough Of The Romance In 'Ekin-Su & Davide: Homecomings'
By Sophie McEvoy
Meet Jungle Runner-Up Owen Warner's Equally Handsome Brothers
By Sam Ramsden
Get The Very Best Of Bustle/UK