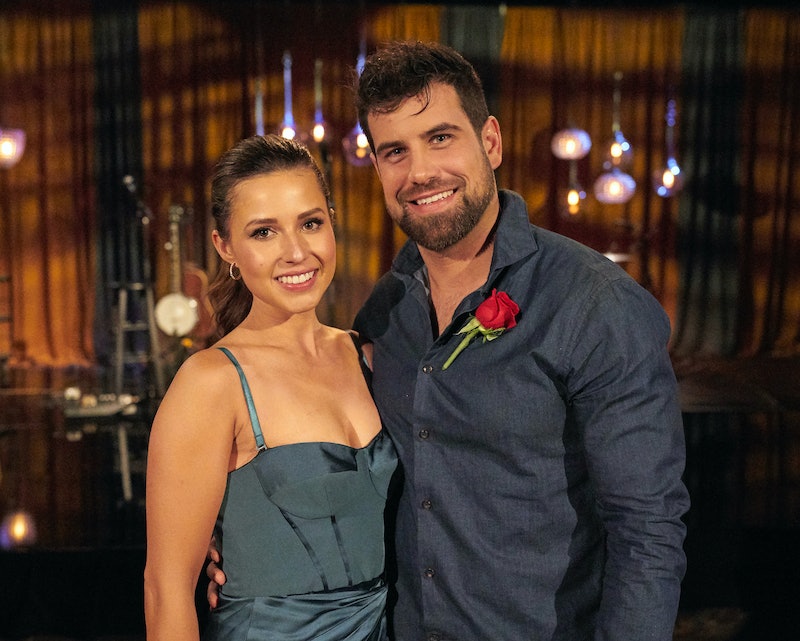 It’s official: after a Bachelorette season full of ups and downs, Katie Thurston and Blake Moynes are engaged.

In the Aug. 9 season finale, Blake and Katie both professed their love for each other before spending the night in the fantasy suite. After a tense meeting with Katie’s mom and aunt, Blake picked out a Neil Lane ring and — after some brief hesitation — headed off to meet Katie. While accepting the final rose, Blake said he “knew” Katie was the one when she first called him trouble, and Katie shared that even though he showed up late to the series, he was “right on time.” Blake said he couldn’t give her what she wanted because she deserved more than that, then asked her to marry him. Of course, Katie said “yes,” and the future Mr. and Mrs. Moynes rode away on horseback.

This marked the third time the 30-year-old wildlife manager vied for love with a Bachelorette. He previously competed on Clare Crawley and Tayshia Adam’s shared season of The Bachelorette before joining Katie’s season a few weeks in. His chemistry with her was immediate. During their first one-on-one, Katie called him a “good kisser” who checked off all of her boxes. Apparently “fiancé” was the last box on the list.

The couple made their first post-engagement appearance during the After The Final Rose special, answering co-host Tayshia Adams and Kaitlyn Bristowe’s questions about their future wedding. “We’ve been waiting for this for so long. It’s tough to celebrate an engagement secretly,” Blake said when asked what it felt like to finally go public with their engagement.

Blake went on to say that his hometown date was pivotal to him realizing Katie was the one, and that playing hockey together was when he knew he was in love. Katie also said that Blake’s hometown date was when she knew he was the one, sharing that being with him was just “easy.” Finally, Tayshia asked them if it was all worth it. Katie answered, nearly in tears, “1000%.”

In June, Katie told Us Weekly that she “definitely” knew who Blake was before he crashed her season, and not just because he was a contestant on Clare Crawley and Tayshia Adams season of The Bachelorette. Apparently, Blake had his eye on Katie from the moment she stepped out of the limo on Matt James’ season of The Bachelor. He revealed during an episode of the Click Bait podcast in July that he previously slid into her DMs. “When I actually reached out that first time, after the first episode, her responses were very cold back,” Blake said. “She was nice, but she didn’t open up her dialogue in any way. It was shut down right then and there.”

Katie shared a similar story with US Weekly. “We had chatted before, but usually what happens is, like, the guys will reach out to the women once they’re eliminated and be like, ‘Good luck, you did great.’ Like very generic, you know?” she said. “So to see him, I was like, ‘Why is he here?’ Like, ‘What’s happening?’”

Soon after Blake’s arrival, Katie invited him on a one-on-one date, explaining to the camera that she would send him packing if she didn’t feel there was true potential between them. But after having fun horseback riding, sharing a steamy makeout, and opening up about her sexual assault, Katie revealed that she was glad she’d allowed Blake to stay, even saying that she could see herself giving him the final rose.

In the end, she did.

More like this
10 Photos Of The Wildest Limo Arrivals From 'The Bachelor' Premiere
By Brad Witter
Zach Swears He Didn’t Look Up Contestants Before The Bachelor Began Filming
By Brad Witter
Nicole & Chris Hinted They’re Still Together After 'Married At First Sight'
By Brad Witter
Bachelor Zach’s “Dream Job” Has Nothing To Do With His Work In The Tech Industry
By Brad Witter
Get Even More From Bustle — Sign Up For The Newsletter
From hair trends to relationship advice, our daily newsletter has everything you need to sound like a person who’s on TikTok, even if you aren’t.