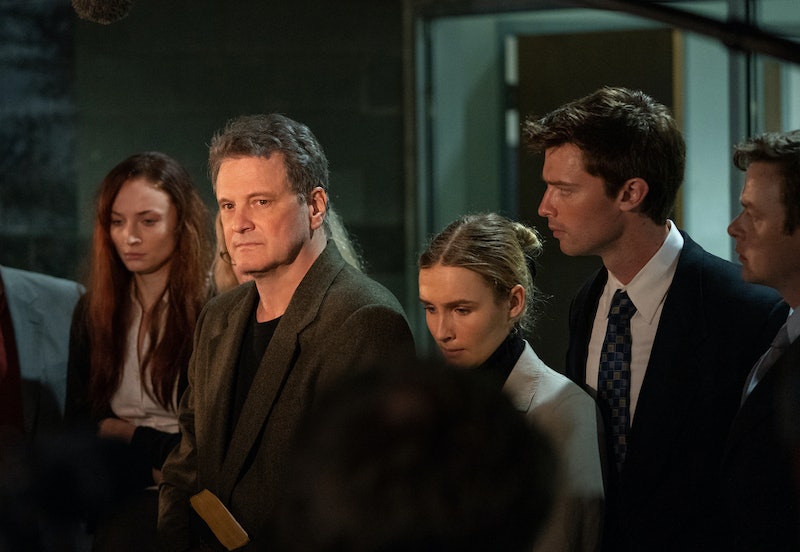 In December 2001, Kathleen Peterson was found dead at the bottom of a staircase in her Durham, North Carolina, home. Her husband, American novelist Michael Peterson, was put on trial; he claimed she fell, while authorities alleged he killed her with a blunt instrument after she discovered footage on his computer proving his bisexuality. In October 2003, he was convicted of first-degree murder.

It’s a shocking case that’s dramatized in HBO Max’s The Staircase, which stars Colin Firth as Michael and Toni Collette as Kathleen. The series takes a closer look at their seemingly idyllic marriage leading up to the murder and how the subsequent media frenzy and murder trial threw their large blended family — which includes Michael’s sons Clayton (Dane DeHaan) and Todd (Patrick Schwarzenegger), Kathleen’s daughter Caitlin (Olivia DeJonge), and adopted daughters Martha (Odessa Young) and Margaret (Sophie Turner) — into disarray.

After a lengthy trial, Michael Peterson was convicted and sentenced to life in prison in 2003, but Peterson always maintained his innocence. His conviction was eventually vacated in December 2011 after a judge found that the blood spatter analyst gave false and misleading testimony at Peterson's first trial, per ABC. He was granted the opportunity for a new trial, and in 2017, Peterson accepted an Alford plea for voluntary manslaughter. (This plea allows a defendant to maintain their innocence while simultaneously acknowledging that prosecutors have enough evidence to secure a conviction.) In February 2017, 73-year-old Peterson was released from prison.

“I don’t see it as victory at all,” he told WRAL-TV after his release. He said taking the plea was “the most difficult thing I've done in my life,” but he decided to do it based on something his son told him: “You'll never win. Pick up your chips and go home.”

Here’s everything else to know about where Michael Peterson’s kids are now.

Clay and Todd are Peterson’s sons from a previous marriage with Patricia Sue Peterson. Clay is the oldest son. Prior to Kathleen’s death, Clay was sentenced to four years in federal prison for attempting to bomb Duke University in 1994.

As seen in the Netflix documentary The Staircase, both sons continue to support their father. In her book Written in Blood: A True Story of Murder and A Deadly 16-Year Old Secret That Tore a Family Apart, Diane Fanning wrote that Todd allegedly told officers that he believed Kathleen’s death was just alcohol-related. And per The News & Observer, Clay told reporters in 2016 that “I certainly would like an outcome where justice would be served.” He affirmed that he and his siblings believed Peterson was innocent in the death of their stepmother.

Per The News & Observer, Clay Peterson has two children and lives in Maryland. Todd Peterson lives in Tennessee. Per Todd’s Instagram, he’s the president and founder of American Industries, and he often uses the platform to espouse his conservative views. In a May 5 Instagram post, for example, Todd ranted about Roe v. Wade leaked draft decision, telling students to “take a stand against the evil Democrats.”

Sisters Martha and Margaret are the biological daughters of Elizabeth Ratliff, Peterson's friend and neighbor when he lived in Germany; Peterson adopted Martha and Margaret after Ratliff’s death. According to CNN, Ratliff was also found dead at the foot of a staircase after spending an evening with Peterson, back in 1985. She was originally thought to have died due to a cerebral hemorrhage, but an exhumation and subsequent examination of her body found that the cause of death was actually blunt force trauma, per The News & Observer.

While some believed that the similarities between these deaths cast more suspicion on Michael Peterson, the Associated Press reported in 2017 that Martha and Margaret still support Peterson. Per The News & Observer, Martha lives in Colorado and Margaret lives in California. The women declined to share any more about their personal lives with the publication.

Notably, Atwater is the only one of Peterson’s children who believed Peterson was guilty. She’s Kathleen’s daughter from her first marriage, and though she initially supported her stepfather's claim to innocence, she ultimately switched her position on his guilt during the 2003 trial, per The News & Observer. In fact, Atwater filed a civil suit against her stepfather. According to WRAL.com, she and Michael Peterson settled for $25 million. “By entering into this agreement, I can only hope I'll be able to put some of this behind me,” Atwater said at the time.

“The only thing that I have to say about the trial and all the subsequent fallout is that, if there was any closure to possibly come from all of this, it came after sitting through the entire trial and listening day after day to all the evidence — on both sides,” Atwater shared in a 2017 interview with Indy Week about the 2003 murder trial. “And after the closing arguments, when all was said and done, I felt confident that I knew what happened. I knew what happened to my mom. While there's no true closure that can ever come for an event like this, for a loss this deep, I was ready to walk away and start moving forward with my life.”

Atwater now goes by the name Caitlin Clark. Per The News & Observer, as of 2018, she’s the mom of two twins, and she lives in Northern Virginia with her family.

This article was originally published on April 8, 2018