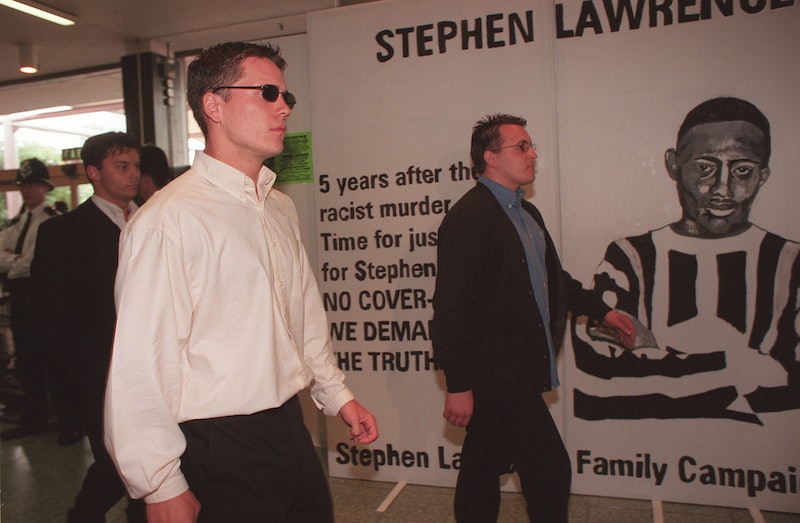 On April 22, 1993, 18-year-old Lawrence was murdered in a racist attack in Eltham, South East London. Lawrence and his friend Duwayne Brooks were waiting at a bus stop when a gang of men assaulted the pair. Brooks managed to escape, but Lawrence was fatally stabbed.

Between May and June 1993, five men were arrested in connection to the crime. After being identified by Brooks, Neil Acourt and Luke Knight were charged with murder. These charges were eventually dropped, however, after Brooks’ evidence was described as “unreliable” by the Crown Prosecution Service.

Despite additional attempts from Lawrence’s family to secure convictions over the years, it wasn’t until 2006 that they were able to reopen the case. Following the discovery of DNA evidence, a trial of Gary Dobson and David Norris began at the Old Bailey in 2011. The following year, both were convicted of murder. However, the other men initially arrested in connection to the crime have never been convicted. So, where are each of the five individuals now?

Following the removal of the UK’s “double jeopardy” law in 2005 (a law that had previously prevented defendants being tried again on the same charges), David Norris was charged for Lawrence’s murder based on DNA evidence found on the defendant’s clothes. In 2012, he received a life sentence, which he is currently serving at Belmarsh Prison in London.

Prior to his imprisonment for Lawrence’s murder, Norris had already served five years (from 2002-2007) for yelling a racist slur and throwing a drink at an off-duty police officer on the same road where Lawrence was killed.

According to the Guardian, Gary Dobson was “the most outspoken in protesting his innocence,” but was eventually found guilty of Lawrence’s murder in 2012 alongside Norris due to DNA evidence. Dobson is currently serving a life sentence in Gartree Prison in Leicestershire.

At the time of this conviction, Dobson was already serving five years for trafficking £350,000 worth of cannabis.

Neil Acourt, who has never been convicted for Lawrence’s murder, was sentenced to six years in jail in 2017 for conspiracy to supply cannabis resin, which was believed to be worth around £7.4 million. He spent a year on remand at Hollesely Bay Prison and was freed on licence after two years.

Like his brother, Jamie Acourt — also never convicted for Lawrence’s murder — was jailed in 2018 for conspiring to supply cannabis resin. He’s currently serving a nine-year sentence at Wandsworth Prison, and is expected to be released in 2027.

Luke Knight has always maintained his innocence in connection to the Stephen Lawrence case and he has never been convicted for the crime. According to the Mirror, Knight is still living near where the murder took place.

More like this
After The Bling Ring, Nick Prugo Was Embroiled In Another Scandal
By Arya Roshanian
Here’s Everything You Need To Know About Operation London Bridge
By Bustle UK
Why Princess Anne Will Remain Princess Royal For Years To Come
By Sophie McEvoy
King Charles Ensured These Subtle Tributes Were Included In Queen Elizabeth’s Funeral Wreath
By Sophie McEvoy
Get The Very Best Of Bustle/UK