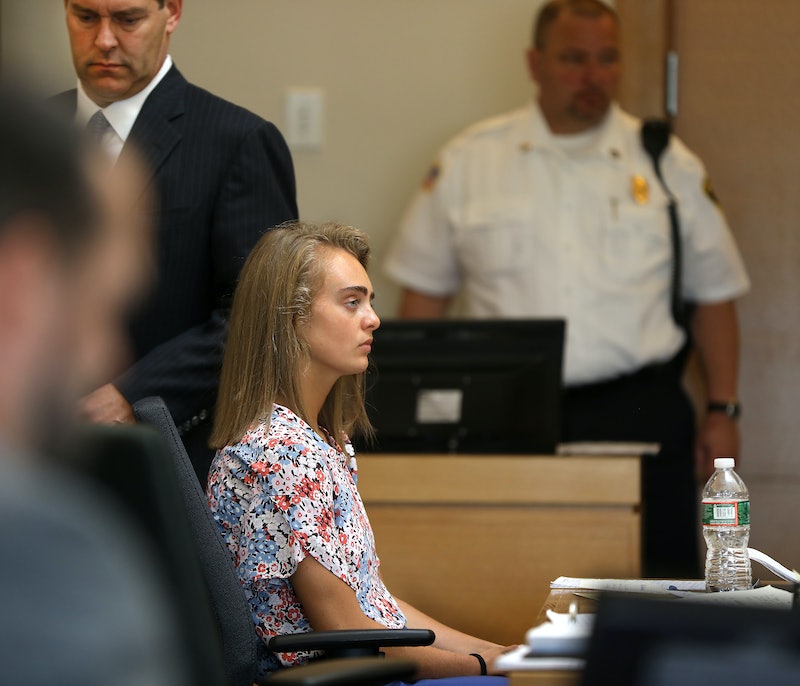 Hulu’s new limited series, The Girl From Plainville, is an adaptation of the real-life case of Michelle Carter, who was convicted of involuntary manslaughter in the suicide of her boyfriend Conrad Roy III. Many are likely familiar with the case, as it received national news coverage when it went to trial in the mid-2010s. In 2019, HBO also released a two-part docuseries on Carter’s conviction entitled I Love You, Now Die: The Commonwealth Vs. Michelle Carter, bringing the case further notoriety.

For those unfamiliar with the details, Roy, 18, was discovered dead in his truck outside a Massachusetts superstore on July 13, 2014. He’d been living with depression and anxiety and attempted suicide once before, so his death was largely attributed to his mental health — that is, until the texts and other messages he exchanged with Carter in the weeks, days, and hours before his death came to light. In those messages, Carter repeatedly encouraged Roy to die by suicide and gave him specific instructions on how to do so, including during their communication on the night he died. At one point, Roy attempted to pull out of his plan, but a text message revealed that Carter reportedly told him over the phone to continue. Despite knowing her boyfriend was dead, Carter didn’t attempt to contact anyone to let them know what he had done.

Roy and Carter met in 2012 while on vacation with their respective families in Florida. In the years following, they kept up a relationship primarily over text, despite living just a few towns apart. Like Roy, Carter struggled with her mental health and had finished a stay at a psychiatric hospital related to an eating disorder not long before Roy’s death.

Carter was indicted for involuntary manslaughter in February 2015, seven months after Roy’s suicide, and the guilty verdict was handed down in 2017. Carter’s conviction surprised many legal experts due to its potentially precedent-setting suggestion that someone’s words can now be legally interpreted as the direct cause of another person’s suicide.

Carter was eventually sentenced to 15 months in prison (after initially being sentenced to two and a half years). Although her sentence was briefly suspended while the Supreme Judicial Court of Massachusetts reviewed her appeal, the high court unanimously voted to affirm the initial decision and sentence. Carter was released early on good behavior in January 2020 after serving approximately 12 months of her 15-month sentence and is currently in the midst of serving five years on probation while staying largely out of the public eye.