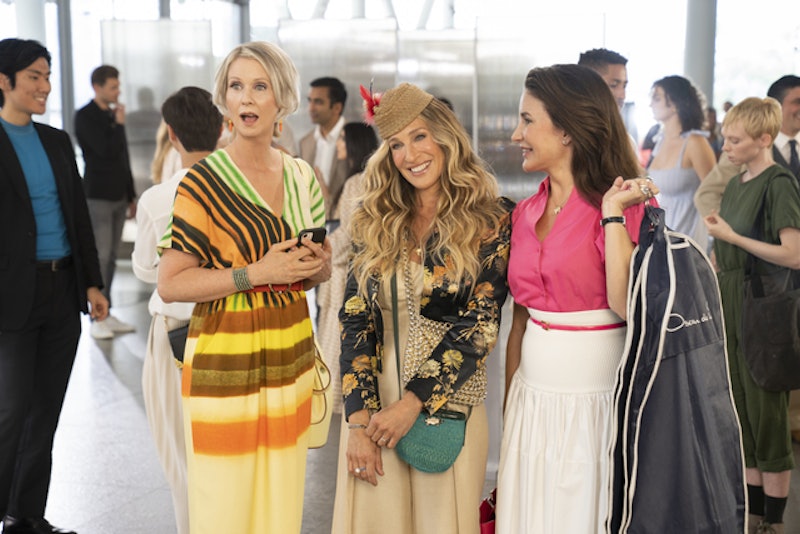 On Sex and the City, New York is Carrie’s (Sara Jessica Parker) longest lasting love affair. So many of the show’s most iconic scenes happen at New York City staples: Carrie stepping into Vogue’s Times Square offices; Samantha (Kim Cattrall) moving into a loft in the Meatpacking District, Charlotte (Kristin Davis) jogging through Central Park with her dog; Miranda (Cynthia Nixon) and Carrie sharing a cupcake in front of Magnolia Bakery.

So when word broke that HBO Max was working on a reboot of the show, titled And Just Like That, fans went wild for the paparazzi photos that began rolling out of the cast filming throughout the city. A slew of Instagram accounts, like @littleylittley, GofG and @mickmicknyc popped up to document the cast on set, following their every move and chronicling all their fabulous outfits. It has been 17 years since the last episode of the beloved series aired, and seeing the girls (minus the inimitable Samantha) strutting through the streets of New York in their Manolos feels like returning home after a long, long time away.

The first two episodes of And Just Like That are slated to premiere on Dec. 9, with episodes dropping weekly after that. Here are all of the filming locations — and iconic NYC landmarks — you can expect to see throughout the season.

The reboot takes us back to Carrie's famous one-bedroom walkup. Based on the trailer, her original apartment on the Upper East Side is almost unchanged, shoe closet and all. There were some spicy photos taken on set in October that show Parker snuggling up with a man played by Jon Tenney who is definitely not Big. They even shared a kiss in front of her brownstone.

What would SATC be without a good brunch scene? In late October, the cast was spotted at The East Pole Kitchen & Bar located inside a historic Upper East brownstone. The restaurant is known for its farm-to-table selection and adorable dining room. “The excitement from the fans was palpable,” East Pole owner Anthony Martignetti told The New York Post. “When [the cast] got out of the town cars, people were screaming the characters’ names. They were really freaking out for Stanford [Willie Garson].”

Parker, Nixon, and Davis were all spotted getting lobster inside Chelsea Market. The ladies of SATC have always had expensive taste, so it tracks that they would be indulging in seafood and presumably trading hot gossip.

The cast was seen at Webster Hall, a famed concert venue located at 125 East 11th Street in the East Village. Founded in 1886, it’s one of New York City's most historically significant theaters. But the real question is, who are the girls seeing live? Adele? Olivia Rodrigo? We’ll just have to wait and see.

Natasha is back! Bridget Moynahan, who played Big’s ultra-chic ex-wife, was seen filming in SoHo right next to Balthazar. She unsurprisingly still looks like a Ralph Lauren model, but it’s unclear why she’s popping up all these years later.

The Upper East Side

It’s safe to assume that Carrie and Charlotte have not followed Miranda across the bridge to Brooklyn, as the cast has been spotted all over the Upper East Side. But the most pressing question is: what is Carrie doing dining with Natasha?! In late November, Parker was spotted filming with Moynahan at matcha cafe Chalait, located at 461 Amsterdam Avenue between 82nd and 83rd Streets.

Charlotte knows the art world better than anyone, so it makes total sense that the girls would be spotted in the gorgeous Whitney Museum in Chelsea. Founded in 1930, it’s a New York City institution that’s been home to many fabulous galas and events. The Whitney feels like a perfect spot for the gals to meet up for a day looking at O’Keeffe paintings.

Paris is for lovers, indeed! In October, Parker and Noth — who plays Big — were seen filming on the Pont des Arts in Paris. Carrie looks fabulous in a full hoop skirt, while Big is looking very dapper in a well-cut suit. Other photos show them riding in a carriage together, which certainly suggests romance, but not everyone is sure that it will be smooth sailing for Mr. and Mrs. Preston in the reboot. You might remember from the series that Carrie and Big had quite a wild ride in Paris after Big showed up to tell Carrie — who moved there to be with her Russian lover Aleksandr Petrovsky — that she was the love of his life.