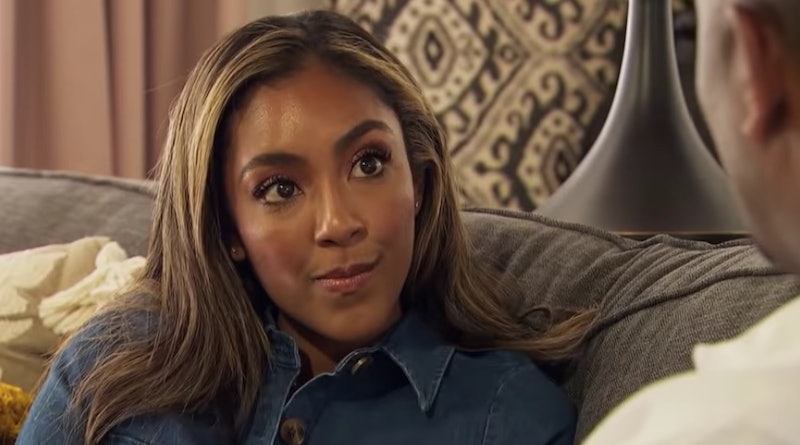 If you watched Colton Underwood’s season of The Bachelor, you probably remember Tayshia Adams’ parents. Specifically, how skeptical her dad Desmond was about the show’s whole ~process~. Unfortunately for Tayshia, becoming the Bachelorette hasn’t done much to ease his uncertainty.

During a preview for the Bachelorette finale, Tayshia has a difficult heart-to-heart with Desmond. She appears to be distraught about which of her final men — Zac, Ivan, and maybe Ben if she lets him back on the show — to choose. “The fact that you can love more than one person at a time, it’s been hard to navigate,” she says in the preview. Later, her dad tells her that he’s worried. “I don’t want you to be making the biggest mistake of your life,” he says sternly.

That could make her decision even harder, considering how much she values her dad’s opinion. “To the man that has taught me so much about life, through GREAT times and some tough love.. You're [a] wild one but I wouldn't change that for the world!!” she wrote in a sweet throwback photo of Desmond for Father’s Day in 2013.

Tayshia is just as close with her mom. On Mother’s Day this year, she shared an Instagram post calling her her “#1” and adding that she “couldn’t function” without her. “I aspire to be everything you are,” Tayshia wrote. “The classiest, sweetest, most generous God loving woman with a side of fire & spice.”

Tayshia’s parents have both been following her Bachelor/ette journey closely — though they have pretty opposite reactions to watching their daughter make out with a bunch of men on TV. “Favorite thing to do after #TheBachelor airs: Call my mom so I can die of laughter while she tells me about my dad hyperventilating every time I kiss Colton,” Tayshia tweeted during Colton’s season. And it didn’t get any better for Desmond when she went to Paradise.

He may not be able to avoid watching more PDA this time around, but hopefully the season at least ends more happily for Tayshia.

This article was originally published on Feb. 25, 2019