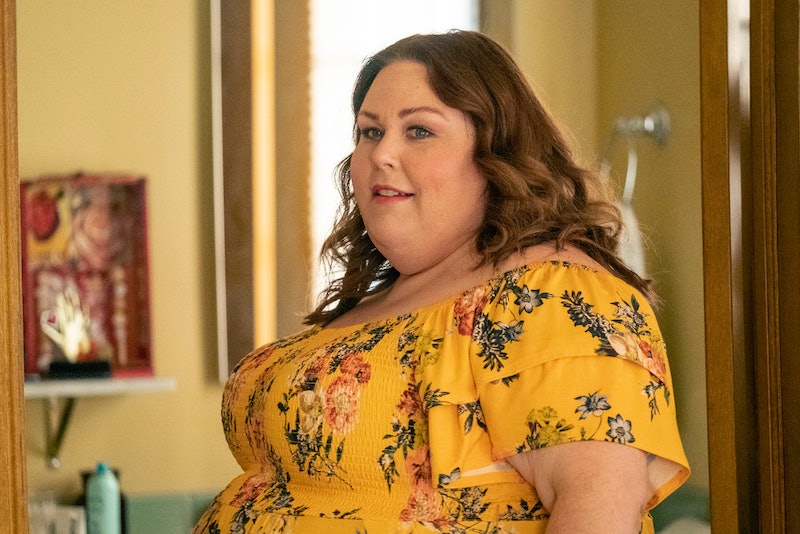 Spoilers for the This Is Us Season 5 finale ahead. Kevin didn’t end up getting married to Madison during the This Is Us Season 5 finale, but another member of the Big Three is walking down the aisle again. The end of the episode flashed forward five years into the future, where Kate was shown in a wedding dress. She told Kevin to go wild with his wedding speech, because “This is the last time I’m doing this.” Um, what? Where’s Toby? Who is Kate marrying? What is even happening?!

At first, viewers may have thought that Kate and Toby were re-marrying each other to show their dedication to one another; that idea was prefaced in the past timeline when Rebecca and Jack did a vow renewal. But then Kevin ran into Phillip, Kate’s music school co-worker in the hallway. “You’re okay if I do some British jokes at your expense right?” Kevin asked him. Phillip replied, “If you can’t take the piss out of your future brother-in-law who can you take the piss out of?”

So it seems Kate and Phillip are getting married, unless Phillip has a British friend or relative he introduced to Kate whom Kevin plans to mock in the wedding speech. Either way, she’s definitely not still with Toby, because he’s not British.

Fans were prepared for Toby and Kate to get divorced, but not as prepared for Kate to get remarried. A flash forward early in the series revealed that Toby wasn’t wearing a ring, and the two have been having marital problems all season. But things seemed to be getting better between them in the Season 5 finale. Toby got a job and Kate decided not to quit hers. They reaffirmed their love for one another as well as their desire to make their situation work for both of them.

And then, bam! The five-year flash forward revealed that sometime in the next five years, they’re going to get divorced and Kate is going to marry someone else. But since there’s only one season of This Is Us left, it’s likely that their split will happen much sooner than in five years. We’ll probably see it play out next season, and also see Kate start to fall for her co-worker Phillip.

We saw a little of the beginning of that romance in the finale. Kate called Phillip to quit her job so Toby could go back to work instead, but Phillip refused to let her give up that easily. “You ended up being great [at this job] ... you’re talented, you’re useful, and on rare occasions your jokes are funny,” he said. There was definitely a flirty tone there.

Still, given that this is This Is Us, this supposed twist could be a red herring. Maybe Toby or someone besides Phillip is the groom. But right now it’s looking like the #Koby ‘ship is on its way out and #Killip is coming in hot.

More like this
Twitter Simply Couldn’t Cope With The ‘Happy Valley’ Finale
By Sophie McEvoy
The 'Freeridge' Cast Shared Their Hopes For A Potential Season 2
By Grace Wehniainen
Netflix Shut Down 'Bridgerton' S3 Rumours About A “Very Dark” Storyline
By Bustle
'Bridgerton' S3 Will Show A *Very* Different Side To Kanthony
By Sam Ramsden
Get Even More From Bustle — Sign Up For The Newsletter
From hair trends to relationship advice, our daily newsletter has everything you need to sound like a person who’s on TikTok, even if you aren’t.